Broadway is planning to start performances of at least three dozen shows before the end of the year, but producers do not know if there will be enough tourists — who typically make up two-thirds of the audience — to support all of them.

The Metropolitan Opera is planning a September return, but only if its musicians agree to pay cuts.

And New York’s vaunted nightlife scene — the dance clubs and live venues that give the city its reputation for never sleeping — has been stymied by the slow, glitchy rollout of a federal aid program that mistakenly declared some of the city’s best-known nightclub impresarios to be dead.

The return of arts and entertainment is crucial to New York’s economy, and not just because it is a major industry that employed some 93,500 people before the pandemic and paid them $7.4 billion in wages, according to the state comptroller’s office. Culture is also part of the lifeblood of New York — a magnet for visitors and residents alike that will play a key role if the city is to remain vital in an era when shops are battling e-commerce, the ease of remote work has businesses rethinking the need to stay in central business districts and the exurbs are booming.

“What is a city without social, cultural and creative synergies?” Gov. Andrew M. Cuomo asked earlier this year in an address on the importance of the arts to the city’s recovery. “New York City is not New York without Broadway. And with Zoom, many people have learned they can do business from anywhere. Compound this situation with growing crime and homelessness and we have a national urban crisis.” 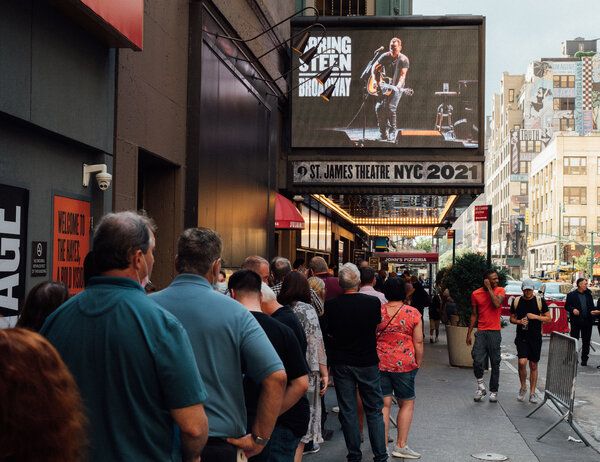 And Mayor Bill de Blasio — who could seem indifferent to the arts earlier in his tenure — has become a cultural cheerleader in the waning days of his administration, starting a $25 million program to put artists back to work, creating a Broadway vaccination site for theater industry workers and planning a “homecoming concert” in Central Park next month featuring Bruce Springsteen, Jennifer Hudson and Paul Simon to herald the city’s return.

Eli Dvorkin, editorial and policy director at the Center for an Urban Future, said, “The way I look at it, there is not going to be a strong recovery for New York City without the performing arts’ leading the way.” He added, “People gravitate here because of the city’s cultural life.”

There are signs of hope everywhere, as vaccinated New Yorkers re-emerge this summer. Destinations like the Whitney and the Brooklyn Museum are crowded again, although timed reservations are still required. Bruce Springsteen is playing to sold-out crowds on Broadway and Foo Fighters brought rock back to Madison Square Garden.

Shakespeare in the Park and the Classical Theater of Harlem are staging contemporary adaptations of classic plays in city parks, the Park Avenue Armory, the Brooklyn Academy of Music, and a number of commercial Off Broadway theaters have been presenting productions indoors, and a new outdoor amphitheater is drawing crowds for shows on Little Island, the new Hudson River venue.

Haley Gibbs, 25, an administrative aide who lives in Brooklyn, said she felt the city’s pulse returning as she waited to attend “Drunk Shakespeare,” an Off Off Broadway fixture that has resumed performances in Midtown.

“I feel like it’s our soul that’s been given back to us, in a way,” Gibbs said, “which is super dramatic, but it is kind of like that.”

But some of the greatest tests for the city’s cultural scene lie ahead.

Hunkering down — cutting staff, slashing programming — turned out to be a brutal but effective survival strategy. Arts workers faced record unemployment, and some have yet to return to work, but many businesses and organizations were able to slash expenses and wait until it was safe to reopen. Now that it’s time to start hiring and spending again, many cultural leaders are worried: Can they thrive with fewer tourists and commuters? How much will safety protocols cost? Will the donors who stepped up during the emergency stick around for a less glamorous period of rebuilding?

“Next year may prove to be our most financially challenging,” said Bernie Telsey, one of the three artistic directors at MCC Theater, an Off Broadway nonprofit. “In many ways, it’s like a start-up now — it’s not just turning the lights on. Everything is a little uncertain. It’s like starting all over again.”

The fall season is shaping up to be the big test. “Springsteen on Broadway” began last month, but the rest of Broadway has yet to resume: The first post-shutdown play, a drama about two existentially trapped Black men called “Pass Over,” is to start performances Aug. 4, while the first musicals are aiming for September, starting with “Hadestown” and “Waitress,” followed by war horses that include “The Lion King,” “Chicago,” “Wicked” and “Hamilton.”

The looming question is whether there will be enough theatergoers to support all those shows. Although there have been signs that some visitors are returning to the city, tourism is not expected to rebound to its prepandemic levels for four years. So some of the returning Broadway shows will initially start with reduced schedules — performing fewer than the customary eight shows a week — as producers gauge ticket demand.

And “Harry Potter and the Cursed Child,” a big-budget, Tony-winning play that was staged in two parts before the pandemic, will be cut down to a single show when it returns to Broadway on Nov. 12; its producers cited “the commercial challenges faced by the theater and tourism industries emerging from the global shutdowns.”

“What we need to do, which has never been done before, is open all of Broadway over a single season,” said Tali Pelman, the lead producer of “Tina — The Tina Turner Musical.”

As N.Y.C. begins its post-pandemic life, we explore Covid’s long-lasting impact on the city.