Bargemusic was rocking last Friday evening as rain fell heavily outside, casting the view of Lower Manhattan in gray.

Inside, though, Bargemusic — the tiny concert hall docked in the shadow of the Brooklyn Bridge in Dumbo — was alight with the liveliness of belowdecks entertainment as a small audience rode out the storm to the fiddling sounds of Johnny Gandelsman’s violin. At times the performance had the improvisatory feel of folk music, but it was in fact a survey of Bach’s towering six cello suites — transformed, with foot-tapping joy, for a smaller string instrument.

Gandelsman isn’t the only violinist to have tackled these classic works; Rachel Podger recorded them in 2019, a year before he released his own set. But his approach is singular: feather-light and rooted in dance and folk music. He treats the suites as six enclosed spaces, tracing long arcs through each one, the sections blurring as he plays them through without pausing.

Gandelsman’s recording came out in February 2020, and he had a concert planned at the Irish Arts Center in Manhattan that March. Like everything else, it was canceled. Bargemusic on Friday was his return; because of ongoing safety measures, it was a modest one, with a distanced crowd in an already small space, and the six suites spread over two evenings instead of his usual one.

He’ll be back on the barge, June 24 and 25, with more Bach: the sonatas and partitas for solo violin. After that, he may return to this endlessly explorable composer, but his focus will be shifting to a new project: This Is America, a set of 22 new violin works commissioned from the likes of Angélica Negrón, Tyshawn Sorey and Tomeka Reid, with premieres rolling out starting this summer.

But before that, he joined a video call after the Bargemusic concerts to discuss the cello suites, which he said he had been discouraged from recording. 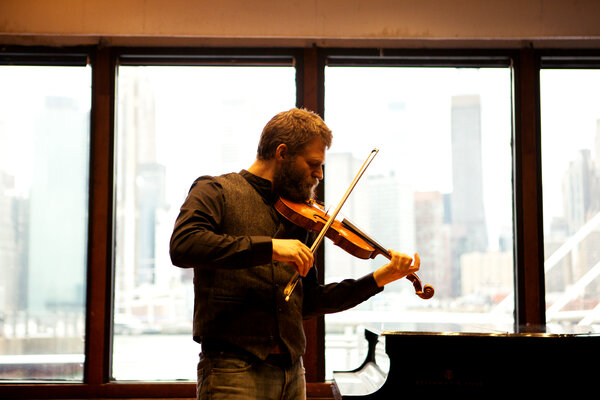 “It was looked at as a novelty gimmick,” he said. “But there are at least three 19th-century editions of transcriptions, and they feel so good on the violin.”

The project followed his recording of the sonatas and partitas. While the violin solos are most difficult in their fugues and implied counterpoint, he said, the cello works more or less keep multiple voices within the same line. The suites did, however, require idiosyncrasies like scordatura (alternative tuning) in the Fifth Suite and the use of a five-string violin in the Sixth — both common in folk music.

That’s what he worked toward in his interpretation: a folk flavor. He avoided listening to recordings — though he said he had been inspired by Paolo Pandolfo’s viola da gamba rendering, “maybe the most radical in a way” — and tried to internalize the music to get at its dance-y “sense of freedom.”

In the video call, he focused on three sections to discuss his approach. Here they are, with side-by-side comparisons of his recording and ones by Yo-Yo Ma, Pablo Casals and Anner Bylsma.

The First Suite, Gandelsman said, “has this just incredible sense of lightness, and also discovery” — a tone set immediately in the Prelude, airy and full of naïve wonder in his reading.

“I don’t want to suggest that a viola or cello can’t do these things,” he said. “But there’s something about the way the violin resonates that just kind of propels everything forward.”

He gives the sections the feel of “a real set of dances,” like something an Irish fiddler would play. Seen from that perspective, he said, the suite’s final movement, the Gigue, is a “party moment” — albeit a brief one. But that fleeting celebration, he added, is “pure joy.”

“I think of the way my friend Martin Hayes” — a renowned fiddler — “might approach a gigue and vary inflections and articulations in a natural way,” Gandelsman said. “To bring a sense of joy and abandon and a sense of closing to these beautiful 15 minutes of discovery.”

Suite No. 4 in E flat: Prelude

Played on a cello, this Prelude tends to take on what Gandelsman called a “majestic quality.” The phrases leap octaves, beginning at the lowest string and jumping to the highest — which, at an unhurried pace, creates a foundational resonance. “I quickly realized,” he recalled, “that that just does not work for me on the violin.”

He couldn’t sustain the low-note resonance at a slow tempo and still articulate a long line. So he arrived, he said, at “an overall shift.” The score is in cut time, so he started by following that, speeding up the eighth notes and taking a wider view of the movement.

“Suddenly everything kind of came together,” he said, “and created this incredible feeling where I felt like I was looking through a kaleidoscope.”

The music was now perhaps less grand than on a cello, but the architecture had been revealed to Gandelsman in a new way. “The majestic quality can sound quite heavy,” he said, “and sometimes one can get lost in the beauty of each bar or each note and lose the sense of how the harmonies are shifting almost imperceptibly from bar to bar. Once I kind of let go of that majestic quality and went for something else, I saw an overall character of the entire suite that is incredibly light and funny and full of humor.”

Suite No. 5 in C minor: Sarabande

When Gandelsman started working on the Fifth Suite, he found himself “pulled into the world of the way that it sounds on the cello,” he said. “It’s very dramatic and in some ways the darkest of the suites.”

The Sarabande, in particular, is despair in miniature — only a few lines in the score, made up of phrases seemingly cut short by low notes, a Sisyphean climb. Those depths, though, are impossible on the violin. And the character of the piece isn’t exactly a natural fit for the instrument’s bright high E string.

Gandelsman took steps throughout the project to pre-empt any problems the violin’s upper register might pose: He used a gut E string, for instance, and recorded to tape to further soften its sound. On the violin, there is still a darkness to the Fifth Suite, Gandelsman said. But as he was working on it, “it started revealing a quality of loneliness, more so than gravitas.”

“What I feel,” he added, “is the most inward kind of conversation with yourself.”

The Fifth’s Sarabande is unique among the suites for not containing chords. “It is the most bare-naked, lonely line,” he said. Without multiple voices, and without a low C string, the violin is left with a fundamentally different, less resonant sound than the cello. But it’s no less affecting.

“There’s a single voice, but there’s also incredible dissonance in this movement,” he said. “Not everywhere, but in specific places he chooses these minor-second inflections, which are so painful. I feel an incredible sense of loss when I’m playing it. I just try to embrace that and not try to compete with the fact that I don’t have low strings that can ring forever.”