Seasonal stagings often underwrite the usual fare. But even without indoor audiences, the tradition lives on — by mail, by screen, by car and by radio.

Jefferson Mays was hoping to perform his one-man “Christmas Carol” on stage this season. Instead, it was filmed for streaming.Credit…Amr Alfiky/The New York Times

For all his flaws, that cranky old miser Ebenezer Scrooge has been a godsend for American theaters. Through recessions and blizzards and other upheavals, he has drawn small children and big money to his redemption story in “A Christmas Carol.”

Stage adaptations of the tale, which generally run between Thanksgiving and year-end, have been a tradition and a lifeline for troupes big and small, professional and amateur. But now, after decades in which the Dickens classic has sustained them, this year theaters are sustaining Dickens.

Gone are the large-cast extravaganzas playing before cheery crowds in packed venues. Instead, theaters are using every contagion-reduction strategy they have honed during the coronavirus pandemic: outdoor stagings, drive-in productions, street theater, streaming video, radio plays and even a do-it-yourself kit sent by mail.

Many of these theaters are willingly running the long-lucrative show at a loss — they are hungry to create, determined to stay visible and eager to satisfy those “Christmas Carol” die-hards who don’t want to miss a year.

“It’s absolutely an obligation, in the best sense of that word,” said Curt Columbus, the artistic director of Trinity Repertory Company, in Providence, R.I., which has staged “A Christmas Carol” each holiday season since 1977. “The story felt more urgent, and more necessary, than it has in many years.” 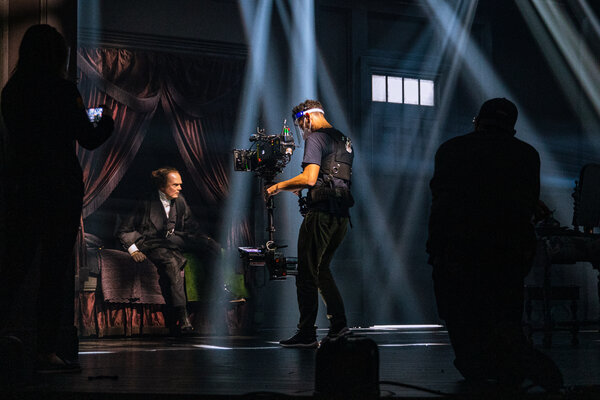 A primer for those who don’t know a Cratchit from a Fezziwig: “A Christmas Carol” is an exceptionally durable novella, written by Charles Dickens and published in 1843, about the transformation, via a series of ghostly visitations, of a wealthy businessman (that’s Scrooge) from mean and miserly to caring and charitable.

Dickens himself performed readings of the story for more than two decades, with stops in America as well as Britain, until his death in 1870; it has been repeatedly adapted for stage and screen, and the story, in one form or another, has been a seasonal staple of the American regional theater since the 1970s. Last year a critically lauded adaptation from England’s Old Vic theater reached Broadway; this year, it will be livestreamed from its London home, fully staged but audience-free.

“‘A Christmas Carol’ does everything we talk about when we talk about theater — it builds community, and it tugs us toward our better selves,” said Joseph Haj, the artistic director of the Guthrie Theater in Minneapolis, which has staged the story since 1975, last year selling 57,900 tickets to the show. This year, the Guthrie will stream a retelling by four actors; it will cost $10 to watch, and will be free for schools.

Mr. Haj doesn’t expect to make money on it. Nor does Leda Hoffmann, artistic director of the Contemporary American Theater Company in Columbus, Ohio, which, for $20 per device, will stream a contemporary reimagining with Ebony Scrooge at its center. “This is very likely a losing proposition, but we’re telling the story because we want to tell it,” she said.

The financial implications are enormous, especially for those that have opted not to charge at all. Ford’s Theater in Washington last year sold $2.5 million worth of tickets to “A Christmas Carol.” This year, it is releasing a free audio version on its website and on public radio, paid for by corporate sponsorships and donations. “Hopefully it will come back to us in other ways,” said Paul R. Tetreault, Ford’s director.

The money “A Christmas Carol” usually brings in allows theaters to perform more challenging work at other times of the year.

In Raleigh, N.C., where Ira David Wood III, the artistic and executive director of Theater in the Park, has been playing Scrooge in a musical adaptation since 1974 (he missed one year, when he had open-heart surgery), the money earned from the holiday show “enables us to do ‘Uncle Vanya’ and play to maybe 12 people,” he said.

Like many major regional theaters, Providence’s Trinity Rep is enormously dependent on the show, which accounts for half of all annual sales. This year, its one-hour streaming version looks still to be popular — in the first 72 hours, 75,000 people from 46 states signed up to watch. But ticket revenue, which last year topped $1.7 million, will be zero, because the video is being aired for free.

“This thing has kept American theaters alive for decades and decades,” said Charles Fee, the producing artistic director of Great Lakes Theater in Cleveland. “Without ‘Christmas Carol,’ our company would almost certainly have failed.”

The 2020 renditions are taking place in every imaginable fashion, although rarely the traditional. Last Tuesday, a prominent regional theater still hoping to stage an indoor production — the American Shakespeare Center in Virginia — canceled all live performances and replaced them with digital options, citing the resurgent pandemic.

Live outdoor productions are requiring social distancing and masks. “Obviously we understand the gravity of trying to do something right now, and we’re in a perpetual state of anxiety,” said Christopher Brazleton, the executive director of the Elm Street Cultural Arts Village in Woodstock, Ga., which is planning a short run of an open-air concert version of its annual “Christmas Carol” musical.

Safety concerns have led several theaters to reconsider the longstanding and crowd-pleasing practice of casting children. To portray Tiny Tim, the disabled child whose fate plays a key role in Scrooge’s awakening, some are now turning to the shortest adult members of their casts. The Lyric Theater of Oklahoma, staging an outdoor production at which patrons walk from musical scene to musical scene across the 10-acre Harn Homestead, is using a puppet so Tiny Tim can be hugged and hoisted without fear.

Stuart Carden, the artistic director of Kansas City Repertory Theater, explored six “Christmas Carol” options before settling, as local infections increased, on a sort of virtual fireside chat, in which four popular local actors, including one who has played Scrooge for 35 years, tell the story direct to camera, for $65 per household. “We just knew we had to continue,” he said.

The Alliance Theater in Atlanta is opting for a drive-in “live radio play” in a parking lot across from a college football stadium. Four performers will be ensconced in separate shipping containers, with attendees encouraged to honk their horns, flash lights and sing along with Christmas carols.

And the St. Louis Shakespeare Festival has enlisted PaintedBlack STL, a coalition of local Black artists, to create scenes from “A Christmas Carol” in 21 storefronts around that city’s Central West End; as patrons wander from window to window, scanning a QR code will allow them to listen to the story as sung by the hip-hop Q Brothers Collective. On weekend nights, there will be live performers along the route.

The most popular solutions are versions of the new normal — streaming, in Milwaukee and Houston, for example, and radio, in cities including Chicago, Louisville and San Francisco.

One particularly inventive example: From its warehouse home in Chicago, Manual Cinema will livestream an original adaptation featuring shadow puppets and murder hornets and a new character, the contrarian Aunt Trudy.

Here and there are some big ventures. The Tony Award-winning actor Jefferson Mays will tackle 50 different roles in a $3.7 million one-man video version, filmed by a Broadway producer to benefit 71 amateur, community and regional theaters and arts organizations.

That’s why, on a recent rain Thursday, Mr. Mays found himself several feet above an empty stage in a cavernous Washington Heights theater, grinning and grimacing as a whirring pair of electric fans made his black dressing gown billow and a faraway director shouted out cues.

“Swim!” instructed the director, Michael Arden. “Look down at the city!” “You’re falling fast!” With each cue, Mr. Mays adjusted his face and his body, writhing in the air as cameras zoomed in. And then, “Cut!”

Mr. Mays has been perfecting his one-man adaptation for years, and he hoped to frighten, delight and inspire audiences with his version on Broadway. But then the pandemic struck. So instead of an audience, he was playing to a virus-tested, face-masked, socially distanced film crew.

“No matter how many times I’ve read it, it hits me in the solar plexus,” he said later, “and these times seem to need it more than ever.”

One low-tech way to find it: a trip to the mailbox. New Jersey’s McCarter Theater Center is offering $40 gift-wrapped boxes with abridged staves (Dickens-speak for the novella’s sections) as well as cards to prompt conversation, or just to color.

Sarah Rasmussen, the theater’s artistic director, hopes families will perform and explore the tale themselves. “Storytelling can happen anywhere,” she said.