“Do you see yourself as a monster?”

It’s a question posed to Celeste Wright by the therapist whose couch she is once again fidgeting uncomfortably upon. This is the same therapist Celeste and her now-deceased husband, Perry, went to for couples counseling, the same one who unearthed Perry’s abuse and who convinced Celeste to leave him.

It doesn’t appear, though, that this therapist is aware that Celeste is actively engaged in a cover-up of Perry’s murder.

Ask any one of them, and they’ll tell you Perry (Alexander Skarsgard) fell down some stairs — an unfortunate slip he maybe deserved considering it came as he was pounding his wife into the cement. It’s a lie, though. Bonnie gave the fatal push, and for the most part, no one’s really sorry she did. 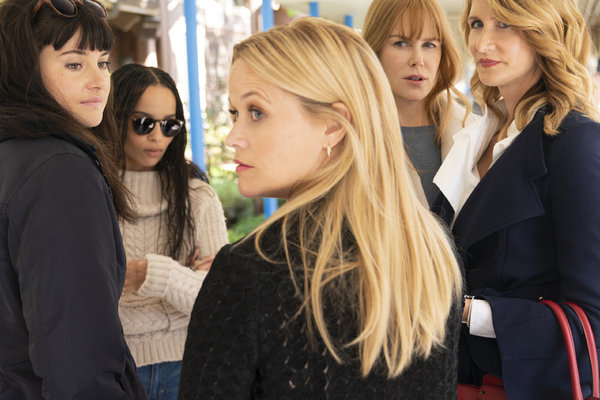 But that truth — and all the truths tied up in Perry’s history of abuse — were just too complicated a story to let out into the world. The lie was simpler. It was cleaner. It was easier. And at least right now, it doesn’t look as if the police have any real evidence to refute it.

But the police aren’t who these women should be most afraid of. The looming threat isn’t what the police suspect, it’s what Mary Louise Wright (Meryl Streep), Perry’s mother, suspects because she seems dead set on finding that monster.

This is the part where we fangirl out over Streep because she deserves it here as much as she ever has. The overbearing mother-in-law bit is an old saw, but Streep takes it to a new, more insidious place.

Let’s pause and appreciate, for example, the dinner table moment with Celeste and her boys, in which Mary Louise attempts empathy by putting down all the other “mediocre, second-rate, pudgy, balding, middle-management” men who get to live while her son doesn’t; lets out a primal scream; chides Celeste for not being able to handle her “loud” grief; and then immediately slips back into vulnerability, complaining of being “so, so alone.”

If Norman Bates wanted to scare people, he should have just dressed up like Mary Louise.

Does Celeste see herself as a monster? Much in the same way she shouldered responsibility for Perry’s abuse in Season 1, she is now faulting herself for her role in his murder. She didn’t push him down the stairs, but in her mind, he would never have been at the top of them if not for how she had exited her marriage.

Even more masochistic, the good times with Perry won’t stop playing over in her mind. Her romanticized visions of him are just as frequent as the nightmares — the ones Mary Louise is practically standing over Celeste watching, trying to read.

“You said rape,” Mary Louise tells Celeste when she catches her waking up in screams. Had she? Did Celeste unknowingly slip some clue, or was Mary Louise was just tugging a thread — one she may be uniquely positioned to identify after having watched her violent son grow up? Whom did he make angry? Who might want to hurt him back, and why?

Mary Louise’s presence in Celeste’s life, her willingness to help with the boys — it’s all a front. She’s in Monterey to squeeze out the truth, and she’s applying pressure ever so masterfully, mostly to Celeste and Madeline, to see what leads she can wring out.

If only she knew whom to press, the real culprit might crack far more easily. 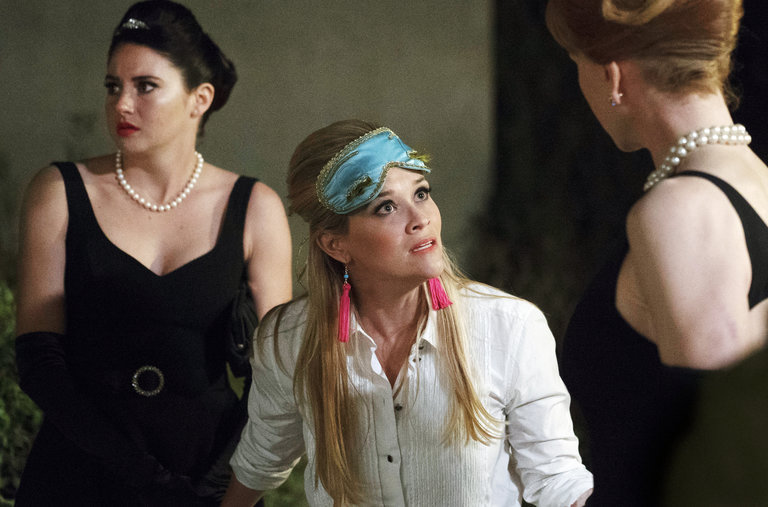 Not surprisingly, Bonnie is in shambles. Consumed by the lie, she has become a zombie. And yet somehow, Madeline just can’t put her finger on why.

As her husband, Ed, implied in Season 1, Madeline has a remarkable ability to pretend. She pretends she’s not a working mom or a stay-at-home mom, even though she’s both. She pretends her love for Ed outweighs her completely depleted desire for him. She pretends she’s over the affair she had, then almost re-had, and is fantasizing about re-having. And now, she’s pretending that this murder is just no big deal.

So as Bonnie sleepwalks through Otter Bay’s second grade orientation, Madeline pretends there are tons of other reasons Bonnie might be “off.” Is she using? Maybe. Or maybe Bonnie is in a funk because she slipped a quick murder into the last school fund-raiser. Could that be it?

“I killed someone. Remember?” Bonnie says with stony eyes when Madeline comes to check on her after Bonnie misses a “we’re all still telling the same lie, right?” meeting of the Monterey Five.

“It’s heavy,” she goes on. And to maintain the lie, she’s had to shut herself off from her own husband and daughter. “I have to just swallow it all.”

What’s more, sayeth Bonnie, that’s Madeline’s fault. It was Madeline who told the police Perry slipped, and all the other women fell in line. Bonnie knows that if she had been honest, she wouldn’t be locked in this emotional dungeon, or even a physical prison, most likely. But it’s too late.

Or is it? At one point, Bonnie is seen lurking outside the police station, perhaps tempting the part of herself that wants to make it right.

Which forces the question: Whom does the Monterey Five have to fear most? Not the police, who have nothing to disprove the well-choreographed story of five well-connected women. Is it Mary Louise, who seems poised to drive Celeste and her crew into a paranoia pressure cooker until one of them bursts?

Or maybe it’s Bonnie, whose longing for a return to normalcy may expose the lie protecting them all.

It’s hard to follow up the double whammy of whodunit and whohaditduntothem that propelled the first season, so there’s reason wonder whether “Will they get caught?” is a worthy enough sequel. With a lesser cast or production I would be more concerned. But especially with Jean-Marc Vallée still tethered as an executive producer and Andrea Arnold (“Transparent,” “I Love Dick”) now directing, I wouldn’t be surprised if “What the hell happens now?” is all we need. Bring it on.

Things I’ll Be Thinking About Until Next Week:

What about Renata? For the most part she’s flying high, almost as unaffected by this whole thing as Madeline. She’s being featured in some highfalutin magazine and has Amabella’s teacher under her thumb. And she has friends now! She’s, like, in the club! Thanks, murder! All is right in Renata’s world, which means she’ll probably do whatever is necessary to protect it. If signs of trouble start showing up in her path, will she throw Bonnie to the wolves?

I can’t help but love that Celeste and Jane are now closer than ever, realizing they’re moms to half brothers. Celeste is even sending Jane money for Ziggy, although Jane is squeamish about cashing the checks. Who else knows about this new blended family? Is it public knowledge? Is Perry’s abuse now public knowledge? The Season 2 trailer suggests that Mary Louise becomes hip to at least some of this, which means Jane might be her next prey.