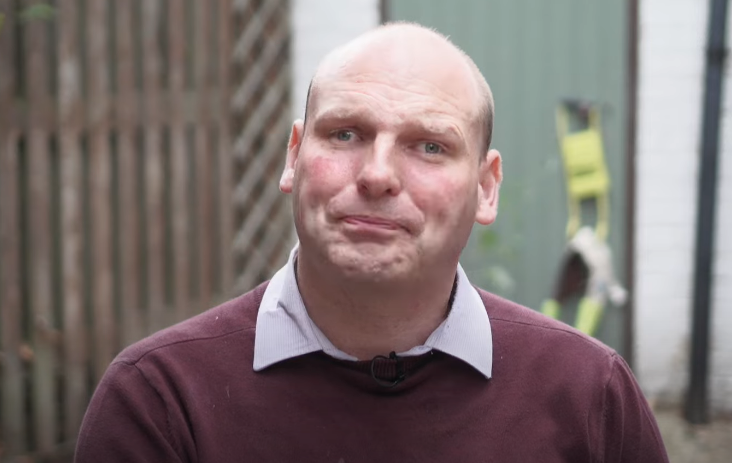 A blind BBC News correspondent has revealed he knocked a thief off his bike and onto the ground after his phone was stolen from his hand on Tuesday morning.

Sean Dilley shared that he took a ‘running jump and dive’ onto the perpetrator before successfully managing to recover his device.

He then apprehended the assailant and called the police, however, let him go after other members of the public arrived at the scene.

Dilley shared an image of his scratched and bloodied leg on Twitter after the incident, telling his followers: ‘A man on a bike just SNATCHED and stole my iPhone from my hand  wrong blind person  wrong day

‘Jumped on him, safely detained and got my phone back  nquite a few cuts and bruises but tweeting on the phonr he stole (and I recovered).’ (sic)

Sharing further details of the events, he said in a separate post: ‘I apprehended him in fact I arrested him and advised him as such the thing is, it had been a few minutes and I had my phone back I decided discretion is the better part of valour police are checking the CCTV if they spot him, he will be arrested by them.’

Dilley said that he ‘strongly suspects’ that he was targeted due to his visual impairment.

He went on to add: ‘I think the gentleman had the shock of his life that is one iPhone 14 pro that the person who worked very hard to pay for has recovered n I think he’s quite lucky.

‘I do know what I’m doing and I do know the legals someone else probably would have reacted more harshly.’ (sic)

While Dilley luckily managed to escape without any major injuries, he did say he was ‘actually quite sore’ and expressed concern that he might have cracked his elbow.

Dilley’s BBC colleagues were quick to send messages to check to see he was okay.

BBC producer Holly Clemens said: ‘Sean, I am so sorry! This is awful. I hope you are ok.’

He lost partial sight by the time he was 14, before going on to have his first guide dog at 16.