Britney Spears made time on what seemed like a relaxing Sunday to clap back at the paparazzi. On her Instagram Stories, Britney Spears claimed the paparazzi photoshopped bikini photos of her to make her appear “40 pounds bigger” than she is in real life. Spears’s claims against the paps was captured in a minute’s worth of Instagram stories, and boy howdy, it’s a doozy.

Spears was calm when she hopped on her Instagram story on Sunday, but she was also visibly peeved about the subject she had to address with her followers. The video featured Spears in a bikini. (The singer had just come inside from riding a jet ski near her vacation home in Miami, where she’s currently vacationing with boyfriend Sam Ashghari.) Spears even addressed her sun-kissed, slightly messy (but still very cute!) look with a jokey caption to her first video: “And sorry for the black mascara running down the side of my face… just got off a jet ski.”

As for the video itself, Spears began with the following: “Hello, and please don’t judge me, I look haggard right now. But my question to all of you is, a lot of fans in our world today, they always are subject to really criticize people and say that the pictures and videos that they’re posting are either not on time or they’re fake.” 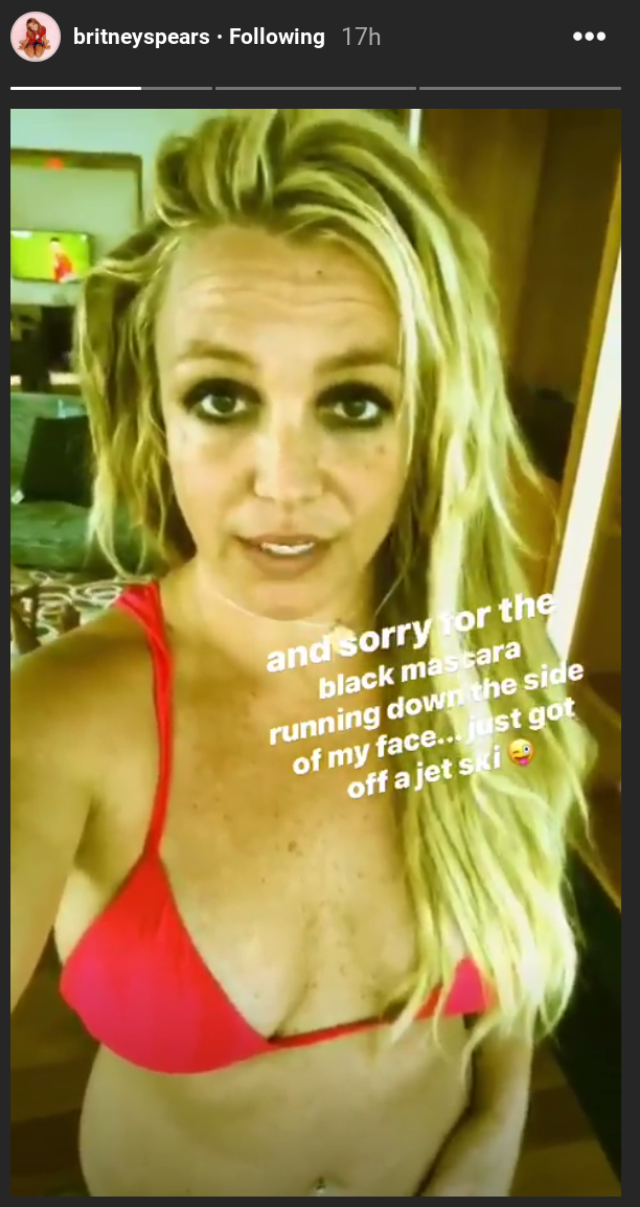 Spears continued, “But no one ever really asks, ‘Are the paparazzi pictures fake, and do the paparazzi people do stuff to the pictures and is the news really real?’ It’s a conspiracy theory that I’m actually interested in. Yesterday I went swimming. I look like I’m 40 pounds bigger [in the pics] than I am today. This is how I am right now and I’m skinny as a needle. You tell me, what is real?”

You can see the photos in Entertainment Tonight’s report on Spears’s Instagram commentary to get a sense of what she’s reacting to. Never one to shy away from being incredibly honest with her fans, Spears seems to be holding firm to the belief that the paparazzi have somehow photoshopped pictures of her taken over the weekend to make her appear bigger than she is in real life. Since we don’t really see photos of Spears every day, it’s hard to know what’s true and what’s not. We’re certainly sympathetic towards Spears, who has had a rough time in the past six months, between seeking treatment for mental health issues related to her father’s wavering health and filing a restraining order against ex-manager Sam Lutfi.

Spears doesn’t need to waste any time worrying about whether or not the paparazzi are intentionally making her look bigger (ostensibly as a way to raise questions around her health and wellbeing, we might add) when it’s clear she’s trying to get better and only surround herself with positive people.