We love a home with a celebrity heritage and Brooke Shields’ Pacific Palisades estate definitely hits that mark. The actress bought this home long before she was married to current husband Chris Henchy — it was a purchase made in 1997 during her first marriage to tennis superstar Andre Agassi. And at some point along the way, Jennifer Garner and Ben Affleck reportedly rented the house out while they were renovating their home during their marriage, per Dirt. 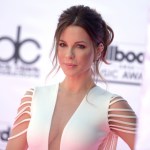 With Shields preferring to call New York City home, and her daughters, Rowan, 18, and Grier, 15, almost out of the house, it’s time for her to say goodbye to her West Coast abode. The former Calvin Klein supermodel has it on the market for $8.195 million after purchasing it for $3.3 million over two decades ago. The 5,345-square-foot, five bedrooms, five-and-a-half bathroom rustic home is nestled amongst the trees, offering the utmost privacy for any celebrity.

The home has three floors with tons of character, this isn’t a cookie-cutter design often seen in Los Angeles architecture. It gives a real country cabin feel to a piece of property that is just down the street from the beach — it’s the best of both worlds. And of course, there’s plenty of outdoor living to be had with this home, from a spectacular deck to an unexpected pool area.

Check out Brooke Shields’ West Coast residence — and don’t miss the divine master bathroom. You can also see additional photos of the home at Dirt.