NEW ROCHELLE, N.Y. — When Shirley Dieujuste worked at a child care center in Westchester County, she loved helping children puzzle out how to write letters.

Ms. Dieujuste, 32, was proud when the teachers at the center asked for her to be their assistant. “Everybody was fighting for me,” she said. “That made me feel good.”

When she lost her job at the center after working there for seven years, she took it hard. As she walked out for the last time in January, she heard a child ask, “Miss Shirley, where are you going?”

“That was my life, those children,” she said in a recent interview in her home in New Rochelle, N.Y.

Suddenly jobless, she worried about how she would pay the rent for herself and her son, Donnovin, 10. And without the children, she felt lost. Her first day at home, she imagined the daily activities — finger painting, story time — happening at the center without her.

The pain of that separation, and the fact that she does not have a high school diploma, means that she does not want to apply for another job in another child care center. But she still wants to work with children, this time on her own terms.

For several Saturdays, she took classes for prospective foster parents offered by the Westchester County Department of Social Services. “It breaks my heart, what they’ve been through,” she said, thinking about children who wind up in the foster system.

Her application was denied because she was too far in debt. But she is not giving up. She is looking to babysit and is also exploring what work as a home health aide might be like. 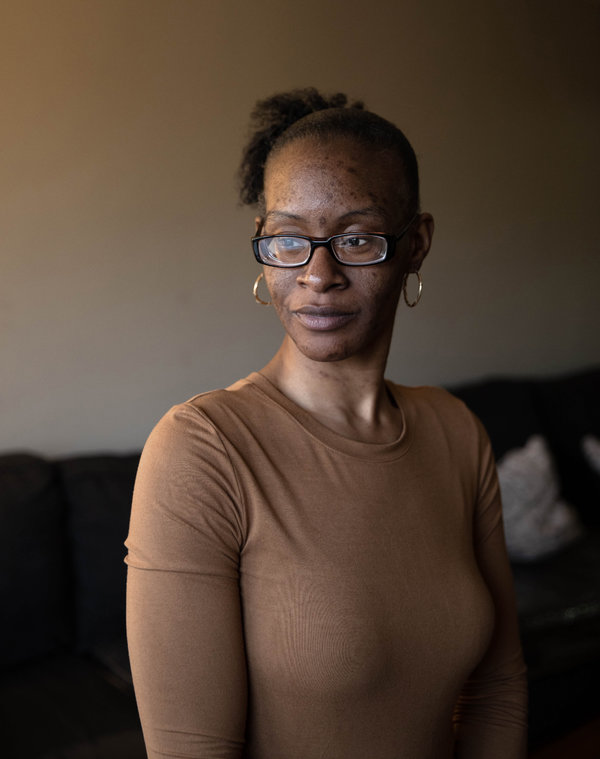 Part of her motivation to work with children is to protect them from sexual abuse, which she said she experienced at the hands of a family friend when she was growing up.

She sometimes prays: God, give me one of those children. She knows that parents often have their own problems — substance abuse, domestic violence, poverty — and that they can take their frustration out on their children.

But she would never do that, she said, adding, “That child might just need love from you.”

Ms. Dieujuste has worked with children for more than 16 years, while also helping Donnovin navigate emotional and physical struggles at home. Those experiences, she said, have taught her patience.

Since a fire in their building filled their apartment with smoke in December, Donnovin has been having seizures and twitches, which she thinks are brought on by psychological distress. Ms. Dieujuste keeps videos on her phone to document the episodes. In one, his legs bend and swing wildly as he tries to walk down a hospital corridor. The memory of another episode, when his stomach shook and twitched, keeps her up at night.

Ms. Dieujuste and Donnovin live off the $794 he receives each month in disability benefits. Both have attention deficit hyperactivity disorder, for which they have sought help in recent years at Westchester Jewish Community Services. Still, school is stressful for Donnovin.

“I feel relaxed now,” he said on a recent Friday, flopping on the couch after Ms. Dieujuste met his school bus outside their apartment building. He closed his eyes, his backpack still hanging from his shoulders.

In February, W.J.C.S. — a beneficiary agency of UJA-Federation of New York, one of the seven organizations supported by The New York Times Neediest Cases Fund — again helped Ms. Dieujuste and Donnovin, providing $450 for rent. After Ms. Dieujuste’s unemployment benefits ended in July, she received an additional $435 from The Fund for rent.

During a recent class, she and the other prospective foster parents discussed scenarios that might enrage them. Some said they would be angry if a foster child started a fire, she said. Others said they could not abide cursing.

For Ms. Dieujuste, it would be an unflushed toilet. It is good that she knows that now, she said, and that she has thought through bringing another child into the home. If she succeeds in one day becoming a foster parent, Donnovin will teach his new sibling to play Fortnite and to care for Sally, the aging and balding hamster who lives on top of his dresser.

After living in their apartment for over a year, she feels ready to babysit or welcome another child into their home.

“I want the child to know he or she has hope,” Ms. Dieujuste said. “Don’t ever blame yourself for what’s happened to you.”

Donations to the Neediest Cases may be made online, or with a check or over the phone.