It’s been 14 years since Carrie Underwood won American Idol, in which time she has since become a bonafide country superstar. But that doesn’t mean she’s forgotten the moments in her career that weren’t quite so shiny — and she’s now finding humor in them. In celebration of the anniversary of her big win on Saturday, Underwood shared a hilarious throwback photo from the season four finale. Even better? She had an ironically fitting joke to describe the emotional milestone.

Underwood took to Instagram for her stroll down memory lane, writing in her Story, “14 years ago today… my world changed.” The photo she chose to commemorate the moment was a closeup of herself, visibly overcome with emotion after being crowned the season four winner of American Idol. And, well, Underwood seized the opportunity to poke a little lighthearted fun at her facial expression in the photo. “It’s true when I say that ‘you can’t cry pretty,’” Underwood joked, alluding to her hit 2018 single “Cry Pretty.” Ba-dum-tish!

Underwood may be feeling particularly sentimental about win this year due to her recent return to the Idol stage. During last Sunday’s season finale, she belted out her new hit “Southbound.” Chatting with host Ryan Seacrest about her time on the show all those years ago, Underwood admitted that she’d been “horrified, scared, nervous, excited, all of the above.” 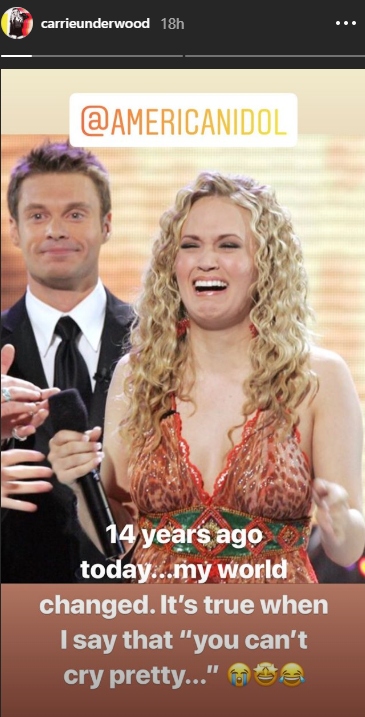 That sounds about right if you can recall Underwood’s first introduction to the world back in 2004. Each year, the Checotah, Oklahoma, native’s American Idol audition interview makes the rounds. In the video, she paces the hall as she waits for her turn to sing for the judges. Once inside the room, Randy Jackson asked if she was nervous. “A little bit… because he’s scary,” Underwood joked, pointing toward notoriously tough judge Simon Cowell. But, clearly, she made a good impression.

Currently, Underwood’s super-successful post-Idol career is keeping her pretty busy — she’s on the road as part of her Cry Pretty 360 Tour, joined by opening acts Runaway June and Maddie & Tae. By all accounts, the tour has been a big critical and commercial success for Underwood, with some outlets calling it a “celebration of women.” The tour continues until October.