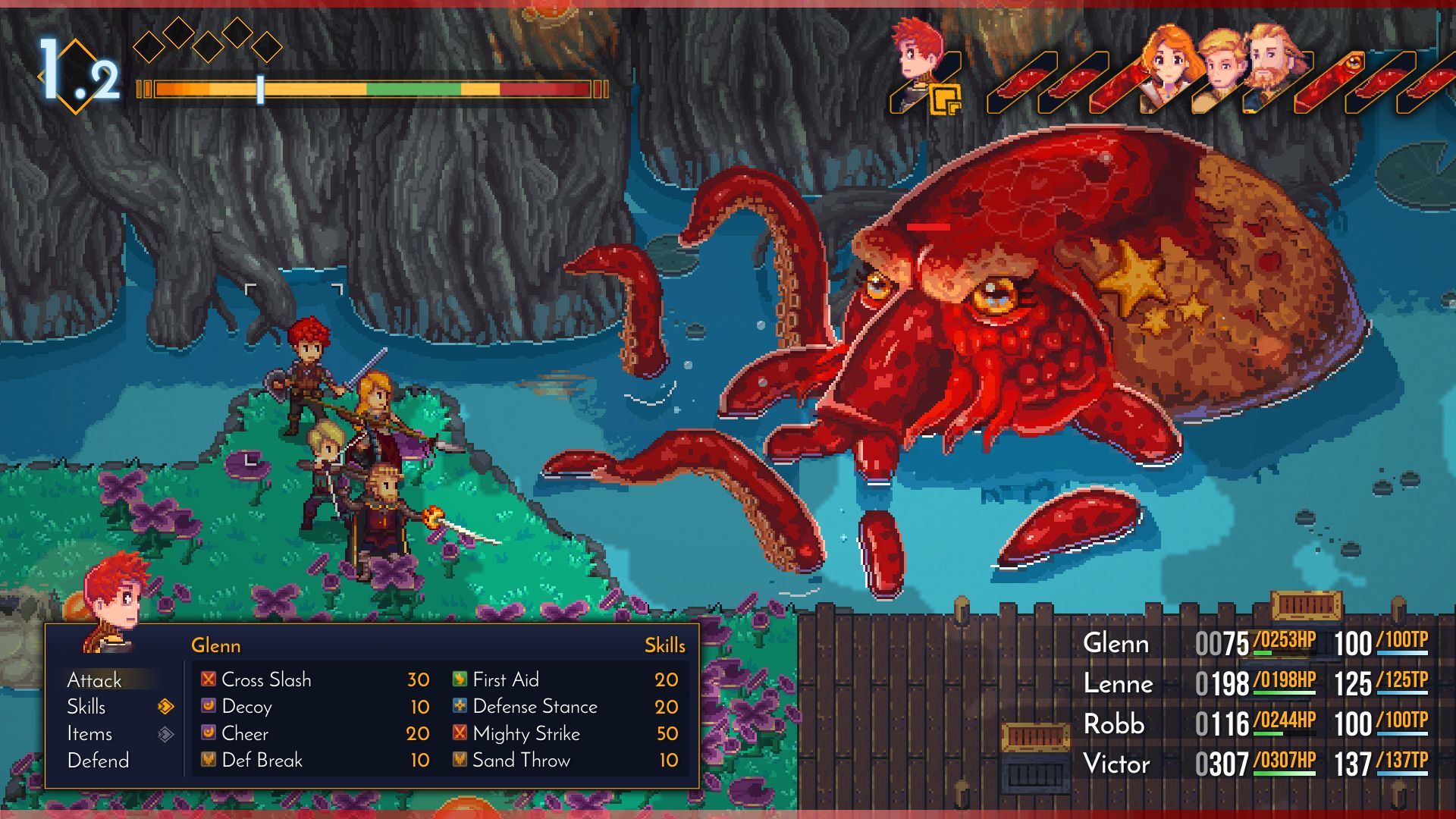 The best Japanese role-player ever made in Germany is a clever homage to Chrono Trigger, with the best of retro and modern features.

And so we come to our last review of 2022, which is another indie game, like Rogue Legacy 2 and The Case Of The Golden Idol, that we missed the first time round – although in this instance it only dates back as far as early December. If we say that it’s a love letter to Japanese role-playing classic Chrono Trigger you should be aware that we’re not talking about Sea Of Stars, which was revealed earlier in the year and is not out until 2023. No, this is a different love letter to Chrono Trigger, but it’s just as passionate.

If you’re not familiar with Chrono Trigger that’s not too surprising, despite it being widely regarded as the best 16-bit Japanese role-player of all-time. The SNES original was never released in Europe, and neither was its PlayStation remaster. The first time it was officially available here was in 2008, on the DS, before being released on the Wii Virtual Console and then smartphones and Windows (by coincidence, it’s currently 50% off on Steam).

The game’s lack of exposure in the West is one thing but what’s always been most disappointing about Chrono Trigger is how surprisingly little influence it’s had on the genre as a whole. The original almost entirely did away with random battles, had a fast-paced and easily understandable plot, and featured worthwhile and varied side missions that weren’t just fetch quests. How many other Japanese role-playing games can you say that of? Well, Chained Echoes for a start.

We’re very much of the opinion that Japanese role-playing game is the signifier of a genre, not a place of origin. South Park: The Stick Of Truth is a Japanese role-player and so too is Chained Echoes, despite the developers being German. Or rather developer, since the game is almost entirely the work of one person – Matthias Linda – who has taken almost seven years to make it, after getting funding from a successful Kickstarter campaign.

You know you’re not going to get a cynical cash-in with a one-man game like this but instead the danger, especially with something that’s meant to be a homage, is that it’ll just turn into a hollow memberberry exercise, that serves no greater purpose than reminding you of other, better games.

To Linda’s credit that’s not what’s happened at all and while this is reminiscent of Chrono Trigger, and several of its contemporaries, it’s not a copy or a rehash. It’s more a what if? scenario, if you imagine how the genre might have evolved in the modern age if graphics technology had not improved at the same rate as everything else.

The story revolves around three rival kingdoms in an uneasy truce but menaced by various internal and external factions who want to incite a new war. Surprisingly, there is no clear protagonist, with the ragtag group of fighters, thieves, nobles you control working together to prevent the seemingly inevitable conflict.

They form their own relationships and cliques, but each is given their own time in the spotlight, even if mercenary Glenn is the nominal lead. However, neither he or the others are anywhere near as distinct and interesting as those in Chrono Trigger, while the plot is also considerably more generic.

Combat is turn-based, with four characters in play at once – although each one can tag team with someone else from your party, which is a neat idea that’s surprising rare for the genre. Teammates can be swapped in if the other character is low on health or magic, but also to use their own unique abilities and combo attacks, since they can act on the same turn they’re called.

There’re also multiple gauges to keep track of, including the relatively standard Ultra Move meter, which fills when giving and receiving damage and powers each characters’ special abilities. Meanwhile, the Overdrive meter halves the damage you take and magic you use, while doubling your attack power, if you can get it into the green. However, it fills with every action you take and can overheat if it goes in the red, which forces you to use a defensive or ultra move to pull it back – or a specific skill type indicated by the meter.

Overdrive might sound contrived (which would be fully in keeping with Japanese role-playing traditions) but it’s one of the game’s best features and ensures you’re always keeps on your toes. This is especially true once the game introduces pilotable mechs for your characters to use, which opens up the range of abilities even further.

Surprisingly, there is no levelling up system and instead you’re simply given a magic stone after a boss fight, that lets each character add one new skill. At first this seems like a bad idea, given the game’s semi-open world approach and the fact that you can go quite a long time between boss battles, but it works in tandem with a number of other features to ensure that you’ve always got a steady supply of new abilities to look forward to.

For example, you can upgrade skills, rather than them all being set in stone, and there are sub-classes to add as well, by collecting special statutes. Plus, gear can be upgraded and used in conjunction with Materia style gems that grant passive abilities. So, the idea is that even though there’s no levelling up you still have access to all the usual benefits by other means.

Although at first some of the features feel like change for change’s sake, you soon begin to appreciate their benefits. The lack of levelling up means there’s no grinding, while the Overdrive meter helps to keep battles interesting when they might otherwise be relatively routine.

In terms of faux retro Japanese role-players our favourite is still CrossCode but this is almost equally good, with just the right balance between nostalgia and modernisation. The fact that it’s all the work of just one person is extraordinary, but we do hope he teams up with someone else soon, because we don’t want to wait seven years for his next game.

In Short: The best sequel to Chrono Trigger there’s never been, with a pseudo-Japanese role-player that maintains a delicate balance between retro homage and modern indie game.

Pros: Great battle system, with the Overdrive meter being an excellent new idea. Interesting alternative to levelling up and some clever semi-open world level design.

Cons: The plot isn’t very engaging and the cast of characters isn’t a patch on Chrono Trigger.