Chrissy Teigen’s tweets being in the news are nothing new, but the conversation around the model-turned-entrepreneur’s social media activity has decidedly shifted in these past few weeks as media personality Courtney Stodden has come forward with their story of being bullied and harassed by Teigen on Twitter as a young teen. Stodden first came into the public eye as a 16-year-old marrying 51-year-old actor Doug Hutchinson, and became the subject of ridicule for their reality TV appearances and relationship, a stance the media and public now appear to be reconsidering with the help of a new Daily Beast profile. But Stodden remembered one celebrity in particular who kicked them when they were down: Teigen, who tweeted at Stodden “i hate you” and, allegedly, DM her things like “I can’t wait for you to die.” Teigen has since apologized, but as the story becomes public knowledge, major retailers have taken note: and Target, Macy’s, and Bloomingdale’s have all reportedly dropped her “Cravings by Chrissy” cookware line. 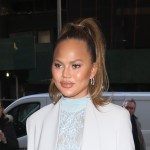 Per TMZ, Bloomingdale’s had been poised to sign a deal with Teigen to carry her cookware, but backed away at the last minute amid Stodden’s profile. Macy’s, which shares a parent company with Bloomingdale’s, and Target have also backed out of carrying the “Cravings by Chrissy” line, per The Hill.

Teigen’s comments were shocking to hear about — and clearly, these companies agreed. The mom of two took to Twitter to take responsibility for the messages she’d sent to Stodden, saying she’d also reached out to them personally, and apologizing for the mistakes she made on social media.

“Not a lot of people are lucky enough to be held accountable for all their past bullsh*t in front of the entire world,” she wrote. “I’m mortified and sad at who I used to be. I was an insecure, attention seeking troll. I am ashamed and completely embarrassed at my behavior but that is nothing compared to how I made Courtney feel. I have worked so hard to give you guys joy and be beloved and the feeling of letting you down is nearly unbearable, truly. These were not my only mistakes and surely won’t be my last as hard as I try but god I will try!!”

While we’re sure Teigen is disappointed not to be working with Target, Macy’s, and Bloomingdale’s, we also have to hope she understands why they’d want to take a step back and evaluate whom they’re entering into a partnership with before moving forward, and that she intends to prove with her actions that the side of her that said those things to Stodden is in the past. We’ve always been rooting for Teigen, and we hope she takes this as a serious wake-up call that what she said was not okay.