When April rolled around and the reality of many, many more weeks of quarantine set in, I started looking for anything other than reality on television.

Usually a marathon of “The Real Housewives of New York City,” “Vanderpump Rules” or “Teen Mom” is a digital cure for whatever ails me, but this weird and intense year posed a challenge to even the most reliable go-to stress salves.

The search was on for something I could lose myself in, and I found the answer on the free streaming service IMDB TV: “Dallas,” the seminal prime-time soap opera that aired on CBS from 1978 to 1991.

I started with a rewatch of the Season 3 finale, “A House Divided,” which made “Who shot J.R.?” the signature obsession of the summer of 1980.

Naturally I had to immediately watch Season 4’s “Who Done It?,” which drew 83.6 million viewers when it aired, the second-largest non-Super Bowl broadcast audience of all time. By the end of the week — OK, the end of the next day — I’d skipped around to more than a dozen episodes, and committed to a full-blown 14-season binge.

The number of seasons doesn’t tell the full “Dallas” story. Even in a broadcast era when most series aired at least 22 episodes a season — compared to the 10 to 13 that is standard for modern cable and streaming shows — “Dallas” took the “everything is bigger in Texas” sentiment to heart. Several seasons included 30 episodes and Season 9 had 31, equal to half the entire run of “Breaking Bad.”

Here are reasons this throwback held my attention throughout a 357-episode rewatch.

It isn’t just that J.R. engages in those activities so relentlessly, but that he does so with unabashed glee that makes him so fun to watch. Every episode of “Dallas” ends with a trademark freeze frame, and many of those are close-ups of a grinning J.R., just after he’s double-crossed a business associate or driven his long-suffering alcoholic wife Sue Ellen (Linda Gray) to another sanitarium stay.

J.R. does have some redeeming qualities. The charm Hagman wrings out of uttering one “Darlin’” is worth both of those Emmys he was nominated for. And he genuinely loves his daddy, his mama, his brother Bobby (Patrick Duffy) and his son John Ross (Omri Katz), even though they often take a back seat to his obsession with Ewing Oil. During my rewatch of the Bobby funeral episode, which ends with a freeze frame of a heartbroken J.R. looking up at the sky, I realized that the slick but soulful oilman was my gateway antihero. A New Jersey mobster, an Albuquerque meth kingpin and a couple of suburban Russian spies later won my heart on cable, but it all started with a Stetson-wearing conniver on CBS each Friday night. 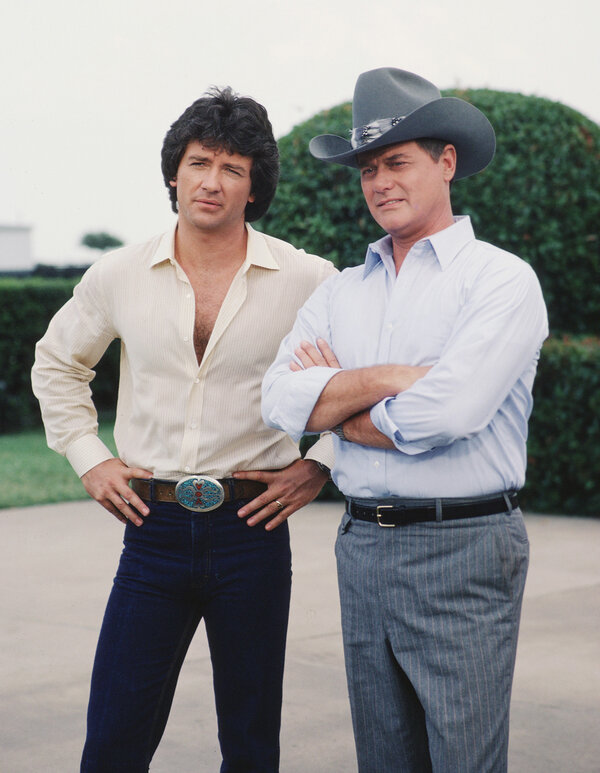 “Who shot J.R.?” is TV’s most earth-shattering cliffhanger, one that had fans all around the world donning “Who shot J.R.?” T-shirts and buttons and drinking J.R. beer to commemorate the whodunit.

But “Dallas” writers liked to leave viewers hanging at the end of every season, from the paternity of Sue Ellen’s baby (is J.R. or his enemy Cliff Barnes the father?) to the series finale, a two-part “It’s a Wonderful Life”-style examination of all J.R. has wrought that ends with a gunshot that leaves the audience wondering if the guilt-ridden oilman had killed himself. (The answer came in a later TV movie, “Dallas: J.R. Returns.”)

And then there’s the Season 9 finale, when Pam Ewing (Victoria Principal) wakes up to a surprise: her dead ex-husband Bobby showering in her bathroom. Duffy had quit the show at the end of Season 8 but when ratings started to slip, Hagman asked his best friend to return. Duffy agreed, sparking “The Dream Season,” TV’s most famous do-over. Season 10 opens with confirmation that Bobby is alive and squeaky clean, and that everything that happened in Season 9 had all been Pam’s dream.

When the Ewings aren’t fighting with each other for control of Ewing Oil, they’re loving and fighting, fighting and loving like it’s a sport. It’s no small feat to keep the middle of a 31-episode season moving, so sometimes those dizzyingly frequent Bobby-Pam and J.R.-Sue Ellen breakup-makeup cycles happen across just a few episodes.

In one infamous instance, a family affair proves to be too literal. Jock and Ellie’s rebellious teen granddaughter Lucy (Charlene Tilton) has regular romps with a ranch hand, Ray (Steve Kanaly), during Season 1, only for Ray to later find out he’s Jock’s illegitimate son. Yep, Lucy is his biological niece. (Couldn’t we have gotten a do-over here?) From then on, Lucy and Ray’s early history is ignored and he becomes an avuncular presence in her life.

A less disturbing soap opera plotline comes via the series-spanning Barnes-Ewing feud, introduced in the pilot when Bobby marries Pam, the daughter of Jock’s enemy, Digger Barnes. The next generation fuels the fight, with J.R. and Pam’s brother, Cliff (Ken Kercheval), swearing to destroy each other on a near-weekly basis.

J.R. is far more successful on this front, of course, and Cliff’s haplessness provides regular moments of levity in the form of his unearned bravado and obsession with takeout Chinese food. This comic counterbalance to all those cliffhanging traumatic moments, all the lives brought to ruination by J.R.’s machinations, is part of an underlying cheekiness that runs throughout the series. Again: “Dallas” erased an entire season with one seven-second shower. But as we near the end of a challenging year full of almost as much drama, who doesn’t wish we all had the chance to call a mulligan on this season of our lives?