After years of being told to fit into a specific – read: straight – box, Darren Hayes is feeling ‘invigorated’ and is unapologetically living his authentic self. In the wise words of an Instagram motivational post, you could say he’s living his best life.

As the lead singer and songwriter of the globally revered Savage Garden, Australian-born, US-based Darren, who’s chatting with Metro.co.uk in London as he announces his first UK tour in 10 years, quickly dominated the pop landscape in the 90s, achieving 10 UK Top 40 hits from I Want You to I Knew I Loved You, while US success beckoned with Truly Madly Deeply.

While Darren has sold over 30 million albums globally – as one half of the legendary duo alongside Daniel Jones, and as a solo artist – he’s opening up about the turmoil that went on behind the scenes during this period as he came to terms with his sexuality in an industry that tried its best to stifle it.

Baring all amid the release of his latest song Poison Blood, which tackles mental illness, the songwriter recalls a period in the 90s when, while married to a woman, he had press trying to out him in the media.

One may assume this sort of behaviour is buried deep in the history books, but as we saw just last month, Rebel Wilson revealed she was in a relationship with a woman after an Australian newspaper planned to publish the news before the actress – who had previously only publicly dated men – had the opportunity to reveal it on her own terms.

Recalling his own experience, Darren compares his own journey to that of Rebel’s, with one caveat: he doesn’t believe he’d still be alive had the press succeeded. 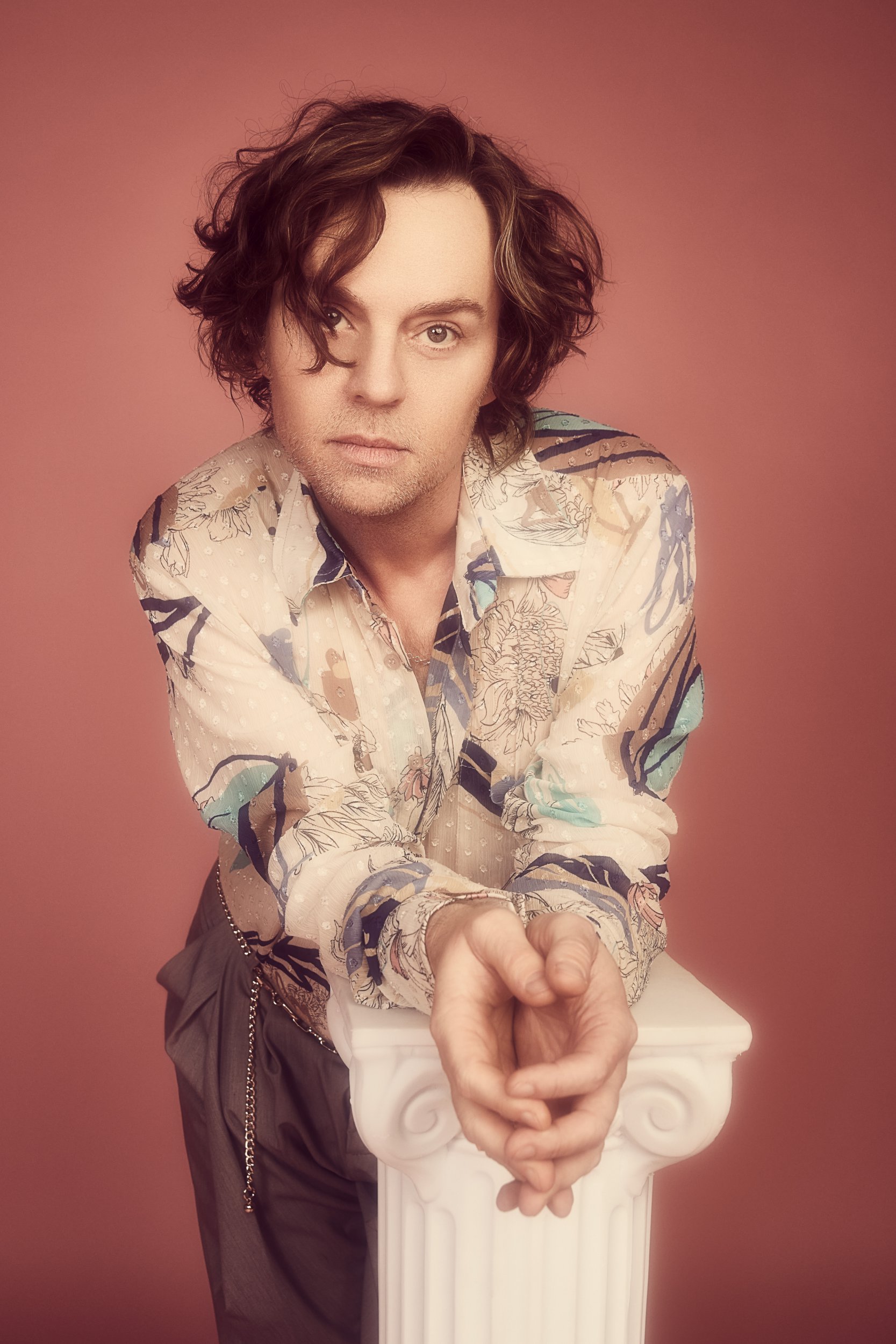 ‘I wasn’t mentally able, I didn’t love myself enough then to even withstand the scrutiny that would have come with the public pressure,’ the 50-year-old says.

‘I think there’s a really fundamental misunderstanding about what coming out is,’ Darren goes on. ‘In my experience, what I’m starting to really share with the world and educate people about me was that there was a misconception about me – I think people thought I was gay and in the closet.

‘I was never in the closet. I was really struggling to accept my sexuality and identify who I was. I was married to a woman and I really didn’t want to be gay, which was just a sad thing, you know?

‘I had so much internalised homophobia within myself and when our marriage ended, thankfully I was with such a strong, beautiful, loving person that she could see that, eventually, I was supposed to become the person I am today and she lovingly supported us separating.

‘I did have press trying to out me. I was in such a fragile emotional state back then, I come from a family history of suicide and depression, and so I was very, very raw and fragile and I was suicidal back then. Were I outed or if something that had happened to Rebel Wilson had happened to me I don’t know if I’d be here to tell the tale.’

The singer notes it wasn’t until he was in a relationship with his now-husband of 17 years Richard Cullen that he was able to come out (‘I didn’t even say I was gay, I mean, Hello! I’m gay!’).

On the impact of being able to make that decision to come out publicly for himself, Darren says: ‘I wanted to be honest with my audience and the world that once I felt safe and loved and proud of myself, that’s when I was able to meet the right person to be in love with, then I felt like I was strong enough to withstand the intense scrutiny…and that was 17 years ago.

‘So for that still to be going on today with someone like Rebel… I thought that was atrocious what happened to her.’

He goes on to recall a period of his professional life where, while battling his own demons, music executives whispered behind the scenes for measures to be made to mute the singer’s ‘feminine’ movements, from the way his neck looked when he danced to his involuntary eyebrow raises while performing.

‘Everyone knew I was gay, but me’, he says, sharing he was the subject of boardroom discussions he’s only finding out about now from former executives.

We’re speaking during Pride, which has come at a time when the rights of LGBTQI people continue to be under threat, with the overturning of Roe vs Wade in the US being a catalyst for debate on gay rights, such as marriage equality, as the lives of trans people continue to be TV panel fodder.

His feelings towards Pride in 2022 are ‘very political’.

‘I wasn’t always proud of who I was. I was the last person to find out I was gay, everyone else told me I was gay and I struggled with that, because of when I was born really.

‘I think in the 70s there was a lot of conditioning that went on, whether it be from school teachers or family members. The message that I got very early on was that there was something deeply hidden within me that was repulsive, that was unlovable, and so I learned to shelve that part of me and almost deny it.

‘Whereas these days, I’m so glad we live in a world where young artists and actors are so open and free about who they are, and that’s something to be very proud of.’

His latest single Poison Blood, a poignant and powerful song which casts the dye for his upcoming album and tour (his first in over a decade), draws on his own experience with mental illness, as he sings ‘every day’s a decision to stay’.

The song is far removed from those that made Savage Garden a household name, with Darren’s current songwriting inspiration emanating from a yearning to make a real difference.

‘I want to say things that people can tell are deeply personal and that are dangerous in that they might make you feel a little uncomfortable,’ he says.

‘Poison Blood is absolutely an uncomfortable topic to talk about, and you can tell that I’m writing from firsthand experience, but if I don’t really go there, what’s the point in asking for your attention?

‘You’ve got so much to choose from nowadays – TikTok it’s like a strobe light of information – so if I’m lucky enough to get someone’s 10 seconds to have a listen to a song, I want to make a difference. I want to impart some sort of emotional experience upon them.’

For fans of his earlier material, though, while his latest single is close to Darren’s heart it won’t stop him from playing the hits he knows so many fans will be queuing up for, as he describes his recent return Down Under to perform at the Sydney Gay and Lesbian Mardi Gras as a ‘real reset moment’.

‘It was when I realised the songs really belonged to the public,’ he says, before later adding: ‘I look at this tour as like, I hate to say jukebox, because that cheapens it, but a chance for me to look out into the audience and recognise faces.’

‘And I think, after so much sadness in the world, one thing that I learned in my time away…’ he trails off to share a story about seeing Kate Bush perform in England, noting: ‘I didn’t expect Kate to play any hits, and yet when she sang Hounds Of Love I burst into tears.’

Darren goes on: ‘I learned so much in that moment, which was that these songs that I am lucky enough to have been involved in, they really do hold such a special place in people’s memories.

‘I’m not going to mess with them too much, I’m just going to serve them up like a waiter and just enjoy it.’

Extra dates for Darren’s Do You Remember? tour go on sale Friday at 9am, while new single Poison Blood is out now.