LONDON — David Tenant has been aware of his “passing physical resemblance” to the British serial killer Dennis Nilsen for a while, he said in a recent telephone interview.

But when it came to portraying Nilsen in the true crime mini-series “Des,” which premieres on Sundance Now on Thursday, he didn’t rely on looks alone. To get into the mind of Nilsen, who admitted to killing and dismembering at least 12 men and was sentenced to life imprisonment for six counts of murder in 1983, Tennant spoke with police officers involved in the case, as well as with Brian Masters, who corresponded with the serial killer for years for a book about Nilsen.

He read some of Nilsen’s own writing (“Ghastly self-serving, egotistical nonsense,” Tennant said). He even learned Nilsen’s signature. One day on set, after filming a scene where he had to sign Nilsen’s name, Tennant pulled up a photo of the original signature on his phone and showed his co-star Daniel Mays just how accurately he’d done it.

“Me getting his signature right probably doesn’t make a difference in the grand scheme of things,” he said. “It’s just part of trying to pay attention to all the details that you can in the hope that they expose a greater truth.” 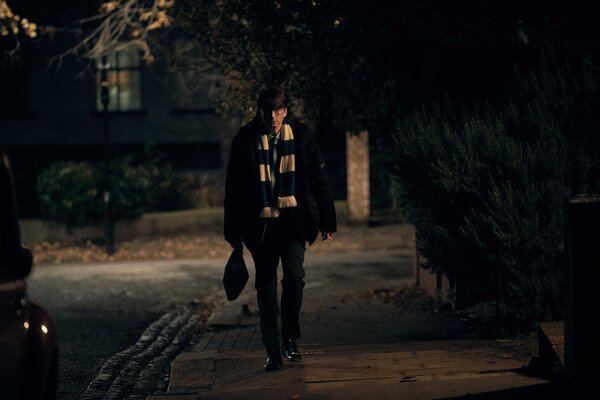 Tennant’s portrayal of Nilsen was one of the most talked-about performances on British TV this fall. The premiere of “Des” had almost 11 million viewers in its first week, while critics lauded the actor as effectively embodying Nilsen, a government job center employee whose victims were all men and were often gay and homeless. At the time, Nilsen was seen as scarily normal for a serial killer. His co-workers knew him as “Des” — hence the show’s title — a nice, if somewhat dull, colleague.

Claudia Connell in The Daily Mail called Tennant’s performance “breathtaking and career-defining.” Carol Midgley in The Times of London called Tennant “hypnotic.” “To make a character simultaneously dull and mesmerizing takes quite some talent,” she added.

In the telephone interview, Tennant politely dismissed suggestions that his performance was the reason for the show’s success. Viewers were drawn to “Des,” he said, because they were looking to understand what makes a serial killer. “We all just want to understand how these things are possible,” he said.

Tennant, the star of other British shows like “Broadchurch” and “Doctor Who,” also explained how his children stopped him from getting too caught up in the role, the case’s links to today, and the ethics of making a drama about a narcissist. The following are edited extracts of the conversation.

Why do you think “Des” was so successful in Britain?

There’s the legacy of it. I’ve always been aware of Dennis Nilsen’s name, and that he was someone who did terrible things. I was 12, 13 when he was arrested. So he cast a long shadow over British culture. And as people, I think we are eternally intrigued and seduced and appalled by how extreme our fellow human beings can become.

And telling these stories is an attempt to understand them, to possibly exorcise the demons of them. And it’s also to memorialize those victims. There were people who really slipped through the cracks in society — that’s who he preyed on — people who didn’t have the means or ability to look after themselves. It’s an interesting time to be doing this in a way, as we’re entering another phase of economic turmoil where you sense the number of people who aren’t supported by society is growing again.

Was it hard playing a serial killer who everyone said seemed normal without making him relatable?

Well, no, as there’s two different things going on. There’s the job you’re doing as an actor, to portray this individual and make as much sense as you can of a human being who appears to make no sense. Then there’s what you’re doing as a larger member of the group making the show, where you’re trying to tell the story appropriately so it doesn’t become a kind of macabre titillation event.

You have to spin the plates and separate off those challenges in a way. On set, playing Nilsen, you’re just trying to justify his choices from his perspective.

You did a lot of research for the role, meeting people involved in the case, reading Nilsen’s writings, watching home video footage of him. Does immersing yourself in a killer’s life like that affect you?

“I don’t know” is the answer, because I’m probably a bit too close to it. If you asked my wife, she’d probably say the research section was more disturbing than filming, because that’s when you’re discovering stuff anew, and it can get a little all consuming. But I have five kids, and they can bring you back to reality quite quickly because they really aren’t interested.

But it was a little different making this. On set, I separated myself a bit more than I normally would. Normally I like to enjoy being at work, but with this I didn’t want to be larky. When you’re wearing the weeds of the killer, as it were, it felt like you had a responsibility to not be taking that lightly.

Nilsen was a bit like an actor in his daily life, playing the role of a normal person and hiding his crimes. Does that similarity to your own profession worry you at all?

I suppose, but aren’t we all actors? Isn’t that part of the human condition? The idea that Nilsen could be having this appalling existence, and then go to work and apparently be rather good at his job, and apparently be rather well thought of too? His friends at work refused to let the police search his desk without a warrant because they didn’t believe he could be capable of the things he was accused of. So he clearly had the very definition of a double life.

But I think that’s the thing with all these stories, those tiny moments when your own life has a similarity: How close are any of us from stepping into an abyss from which we can never get over again? It’s impossible to ever know, but I think it’s one of the duties of drama to try and unpick why we do what we do.

One thing you do make clear in the show is Nilsen was a narcissist. He’d clearly have loved a show being made about him. Does that make you feel bad having done it?

I am relieved that he’s not around for that very reason. I think perhaps we were liberated by the fact that he’s not here. Because he gets no joy out of this, which is right and proper.

But at the same time, I’m aware that as much as he would have loved it, he would have been furious that we weren’t telling the story from his point of view. That would have infuriated him.