CARMEL, Ind. — What do the performers Christy Altomare and Corey Cott do during a weekend in this midsize Central Indiana city in between workshops for a Broadway-aimed musical?

They get cake. And steak.

“I’m pretty sure Corey lived in the Cake Bake Shop this week,” said Joel Kirk, the founder of Discovering Broadway, a nonprofit that brings New York actors and creative teams of Broadway-bound musicals to Indiana to work on their shows-in-progress.

They were performing for two fully vaccinated audiences at Feinstein’s at Hotel Carmichael, an upscale nightclub named for the entertainer Michael Feinstein, who is the artistic director of the nearby Center for the Performing Arts. 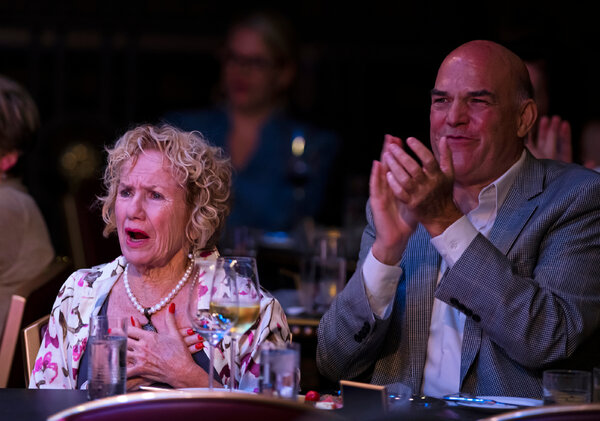 Amid clinking glasses, soft purple lighting, waiters in black vests over white button-ups and black masks and women in heels — heels! — the musical’s composer, Zina Goldrich, played the piano as Altomare, Cott and the rest of the team sang numbers like “My Cousin’s Cousin” and “Right Before My Eyes” as well as songs written the day before, including a new finale.

It was the first time many of them had performed live since March 2020.

“Ever After” was the second musical to bring its creative team to Carmel for a weeklong workshop. The team for “The Devil Wears Prada,” the musical based on the 2006 film about Anne Hathaway’s aspiring young woman pitted against Meryl Streep’s fashion-world ice queen, visited in February.

Except for one very important absentee.

Sir Elton John, the musical’s Tony-winning composer, “was unable to attend,” Kirk said, though his husband, David Furnish, one of the musical’s producers, stood in on Zoom calls from Britain. (Paul Rudnick, who co-wrote the book, was also absent.)

It was a missed opportunity for the composer to visit the state where musicals like “The Prom” and “Kurt Vonnegut’s God Bless You, Mr. Rosewater” are set.

“He’ll just have come back,” Kirk said. “I’d love to show him Carmel.”

The Discovering Broadway initiative, which Kirk founded in late 2019, is part of an effort by the 26-year-old New York-based producer and director to bring top-notch talent to his hometown.

Kevin McCollum, a producer of “Rent,” “Avenue Q” and “In the Heights” as well as “The Devil Wears Prada” and “Ever After,” said the biggest advantage to workshops in Indiana was their capacity for focused concentration, without people leaving early or arriving late because of other commitments.

McCollum brought the “Prada” team to Carmel for Discovering Broadway’s first workshop in February, ahead of the musical’s 2022 premiere at Chicago’s James M. Nederlander Theater. It was the first time Shaina Taub (“Twelfth Night” at the Public Theater), who wrote the lyrics; Nadia DiGiallonardo, the music supervisor; James Alsop, the choreographer; Kate Wetherhead, who co-wrote the book; and Anna D. Shapiro, the director, had been in a room together.

“We were trying to figure out what we needed to do to keep the show going,” Alsop said. “Kevin was like, ‘Carmel, Indiana!’ And we were like ‘What?’ Then we got there, and it felt like a movie set.”

After a mutual friend introduced him to McCollum in 2019, Kirk got a call from the producer in late January asking if he could host a weeklong retreat for the “Prada” creative team — in 17 days.

“I wanted to look back on the pandemic and say, ‘Wow, we programmed “The Devil Wears Prada” before Broadway was back,’” he said.

Because the coronavirus vaccine was not yet widely available, the team members wore masks and were regularly tested before, during and after their time in Carmel. Taub said precautions, combined with heavy snowfall and 20-degree temperatures, meant the team essentially stayed in the hotel the entire week — and worked far beyond the typical 10 a.m.-6 p.m. schedule.

“I’d wake up in the morning with lyrics in my head and then go to sleep with lyrics,” she said.

Three months later, McCollum brought a second team to Carmel to workshop “Ever After,” a feminist Cinderella story based on the 1998 film that starred Drew Barrymore, with a goal of staging a concert performance by the end of the year. And this time, the sunny skies and balmy temperatures meant they could actually explore.

Wetherhead, who wrote the book with Marcy Heisler, was taking long walks on the Monon Trail, a 27-mile section of a former rail line — then rushing back to the hotel with ideas. Heisler, who also wrote the lyrics, was writing at the nearby Eggshell Bistro, on a sun deck at Hotel Carmichael and in her own room at 3 a.m.

“We were working eight hours a day,” she said. “Just not 9 to 5.” (There was time for steak breaks at Anthony’s Chophouse and Monterey Coastal Cuisine, she said.)

The musical already had two out-of-town runs, at the Paper Mill Playhouse in New Jersey in 2015 and at the Alliance Theater in Atlanta in 2019. The New York Times critic Charles Isherwood called the Paper Mill production, “storybook-pretty if bland,” with a score that “blurs together in the memory almost instantly.”

But Cott, who arrived with Altomare on Friday and taught a master class for local students, said that this version was a “dramatic change” from the previous stagings. Goldrich, the composer, and Heisler, known for their children’s musicals “Dear Edwina” and “Junie B. Jones,” wrote five new songs, and the others on the team, including the director Marlo Hunter (“American Reject”), collaborated to revamp much of the rest of the show, including writing a new finale.

Unlike in New York, where invited audiences often consist of Broadway theater owners and stakeholders, Kirk said the focus is on sharing the work with the Carmel arts community, which is home to Feinstein’s Great American Songbook Foundation and hosts a prestigious summer vocal competition based on Broadway and Hollywood musicals. (According to Kirk, 80 percent of the audience members for “Ever After” were Central Indiana residents who were not contributors to the organization.)

“I’m creating opportunities I would’ve leaped at growing up in Carmel,” Kirk said.

Kirk, who remains Discovering Broadway’s sole employee, said more than 60 Broadway-aimed productions have inquired about doing residencies in Indiana in the year and a half since he founded the nonprofit, which has an annual budget of between $350,000 and $400,000. His goal is to do three workshops per year in the Indianapolis area.

Each retreat can cost Discovering Broadway upward of $50,000. (The organization pays for the team’s travel expenses and housing and also provides a per diem and an artist stipend.)

“But $50,000 is nothing for the experience and investment we’re able to provide in the community,” Kirk said.

Kirk has lined up two corporate sponsors for each workshop; received five grants, including from the Allen Whitehill Clowes Charitable Foundation and the Central Indiana Community Foundation; and enlisted more than 50 individual donors, all through relentless hustle. He estimates he had about 628 meetings in the organization’s first four months.

In the fall, he hopes to host a workshop that mixes leads from New York with a local cast of six to eight actors, as well as local musicians.

“The goal is to create a bridge,” he said, “to bring two communities together to create a third.”

Near the end of the performance on Sunday night, Altomare and Cott sang the new finale, grasping hands, their faces almost touching. They crept closer together, their lips inches apart — then they hugged.

“I’ll give away they do kiss at the end of Act 1,” McCollum said onstage. “But you’ve gotta pay for that; it won’t happen here.” He added: “Seeing that kiss is worth at least $100.”

“Sold!” a woman in the audience yelled.