Everyone seems to have classified documents stored in their homes these days. While the National Archives and the Department of Justice are going to have to sort through this mess, Donald Trump has weighed in on both President Joe Biden and former Vice President Mike Pence finding themselves in the same situation.

Last week, the former president laid into Joe Biden discovering top-secret papers in a “flimsy, unlocked, and unsecured” garage at his Wilmington, Delaware home. Of course, this is the man who had files seized by the F.B.I. at Mar-a-Lago (and alleged photographic evidence of him flushing documents down the White House toilet when he was in office).

Donald Trump went on a rant on Truth Social about Joe Biden, writing, “The White House just announced that there are no LOGS or information of any kind on visitors to the Wilmington house and flimsy, unlocked, and unsecured, but now very famous, garage. Maybe they are smarter than we think! This is one of seemingly many places where HIGHLY CLASSIFIED documents are stored (in a big pile on the damp floor).” He then bragged, “Mar-a-Lago is a highly secured facility, with Security Cameras all over the place, and watched over by staff & our great Secret Service. I have INFO on everyone!”

Now that Mike Pence is involved in classified document-gate after he found files at his Indiana home, Donald Trump is defending his former vice president — which doesn’t make sense since they are all in the same mess. ““Mike Pence is an innocent man. He never did anything knowingly dishonest in his life. Leave him alone!!!,” the 45th president wrote on Truth Social. What makes this post so surprising is that Donald Trump and Mike Pence have a rather frosty relationship, and the former vice president could be an opponent in the race for the 2024 Republican nomination.

Donald Trump is likely looking for GOP allies since his party is starting to eye other candidates for the upcoming presidential race. But drawing a political line in the sand over classified documents isn’t ideal because both parties seem to be struggling with creating organized filing system.

Before you go, click here to see the biggest presidential scandals in US History. 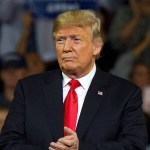