When you think of Claudia Conway a few things might come to mind — namely her infamous TikToks where she chronicles life with her parents Kellyanne Conway, a former Trump advisor, and Lincoln Project co-founder George Conway. You might regard Claudia as a “rebel” in her family for her left-leaning beliefs, or simply view her as a troubled teen who’s gone viral thanks to secretly recorded videos of Kellyanne and George — videos that prompted many fans to tweet #FreeClaudia in support of her desire for emancipation. So when she showed up as a contestant on American Idol, seemingly out of the blue, viewers were understandably left stunned — and with questions. 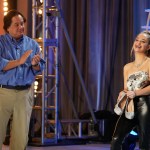 Was this proof that her videos were nothing more than a ruse to get attention? Was it a joke? Was her interest in singing even genuine? But as I watched Claudia Conway go viral — once again — a different question came to mind: Are we about to do the same thing to Claudia Conway that we did to Britney Spears? Just like #FreeClaudia, there’s that other trending hashtag that’s mirrored Claudia’s situation: #FreeBritney — referring, of course, to Britney Spears’ ongoing conservatorship battle. While the two women have nothing to do with one another, the sad truth is they have more in common than you’d think. Both Claudia and Britney Spears have been targeted and exploited by the media, at a time where they are the most vulnerable, for our own entertainment — and it’s a cycle that needs to be stopped.

It’s easy to write off Claudia as a Conway — and everything that comes with her family name — as opposed to thinking of her as Claudia the person, which is why it was so upsetting to see a popular network like ABC take advantage of and capitalize on her status in the first place. According to Claudia’s TikTok, the show reached out for her to audition after she posted a few snippets of herself singing, which she said is her “passion” during her American Idol appearance. And if the show were innocuous in reaching out to the teen and actually had Claudia’s well-being in mind as opposed to quick views — that would be the end of it, but from the moment Claudia appeared on the screen, it was apparent that her singing isn’t what mattered.

ICYMI, let’s quickly recap: As Claudia walked across the stage and reached the judges during her American Idol debut, the first thing Katy Perry said was, “Are you okay?” Claudia’s response? “No…but yes, I’m good.” That’s when judge Luke Bryan (who viewers were supposed to believe had no knowledge of who Claudia is or her situation) asked what he’s missing. Claudia formally introduced herself, saying: “My mother is Kellyanne Conway. She worked for Donald Trump. And my dad is George Conway. He’s a lawyer. He worked against Donald Trump. It’s a lot, but, you know, I only want to spread love, and I love a compromise.” It’s hardly unusual for American Idol to use a contestant’s story prior to their audition, but when the show makes a point to invite her problematic parents in the segment and portrayed Claudia only as someone with a story to tell, it’s obvious they never did care about her talents, or her, at all.

During one trailer for the show, Claudia was referred to as a “social media sensation,” which is a strange way of glamorizing exactly what Claudia has made a name for herself for. While watching, it’s hard not to contextualize American Idol’s desperate attempt at clicks. Producers have turned to other click-bait tactics that have been dramatized for entertainment’s sake. In Claudia’s case, the truth is we really just don’t know how intense her story may or may not be behind the scenes; and with this in mind, it’s hard to simply ignore the disturbing content that’s happening on screen. For all we know, this might be someone who needs help — and here we are, watching her sing Adele’s “When We Were Young,” like nothing is going on. After the first episode aired, American Idol deservedly received backlash online that caused them to pull back from sharing Claudia’s time on the show.

But when is it enough? When do we turn off the TV and recognize that commodifying the unresolved trauma of a child is going too far? When you view Claudia’s story in conjunction with what we know about Britney Spears and the discourse about how tabloids and the media have failed her, it’s impossible to not feel protective of her. And if you regret how you consumed media about Spears in the past, but are now tuning in to American Idol — well, it’s time to take a step back and think about what you’re doing. The effects of growing up around the paparazzi have notably changed the way Spears has chosen to protect her own sons as they grow up, and it’s so heartbreaking that no one was able to do the same for her. Since 2007, some us of have learned how damaging it is to thrust a young woman into the spotlight — but Claudia’s Idol appearance proves we are no better now than we were then.

While Claudia may or may not have been completely aware that the show wanted her on TV for her story as opposed to, you know, her singing, her parents knew exactly what they were doing. Kellyanne and George had as much to gain from agreeing for Claudia to be on screen as ABC did — but what’s in it for Claudia?  It’s as simple as this: Don’t normalize trauma on your screen as part of regular content when we don’t know how complicated her story truly is. A week after her American Idol audition, Claudia took to TikTok to ask her followers to watch a documentary created about her life with her parents by an account called Justice For Claudia Conway. The hour-long video, which has 35K views as I write this, ends with a compilation of people saying they believe Claudia and call for her freedom, which parallels the way the Framing Britney documentary depicts the traction the #FreeBritney movement has gotten over the years.

At one point during Claudia’s audition, Kellyanne calls in via video chat and tells Claudia, “Winners are people who are willing to lose.” In turn, it begs the question: Exactly what are Kellyanne Conway and her husband willing to lose?

Before you go, click here to see celebrity kids who are all grown up.