Sometimes you see a snippet of a dance and wish wistfully you had seen the show. That happened a while ago when I saw a trailer for Ephrat Asherie’s “Odeon,” which managed to suggest irrepressible cheer and good-humored invention in a quick succession of clips from the hourlong dance. The work premiered at Jacob’s Pillow in 2018, and — hooray! — it is now available on the Joyce Theater’s website through April 28, featuring Asherie’s splendid troupe of six dancers, as well as four musicians, headed by her brother, the jazz pianist Ehud Asherie.

They play the infectiously melodic, dancey music of the early-20th-century Brazilian composer Ernesto Nazareth, and Asherie matches the diverse musical forms — sambas, waltzes, tangos, ragtime, African rhythms and classical strains — with a choreographic hothouse blend of her own. Street and club dance, voguing and breaking, tap rhythms, capoeira and contemporary dance idioms are all part of the mix. But Asherie has a clear eye for structure, interspersing vibrant group sequences with solos and smaller groupings, often allowing silence to punctuate the energetic business.

“Odeon,” the title of the second Nazareth composition in the piece, is an ancient Greek name for a small theater where poets, musicians and singers presented their work. It’s a perfect title for a dance that celebrates a community of artists with the kind of generosity that makes the viewer feel a part of things too. 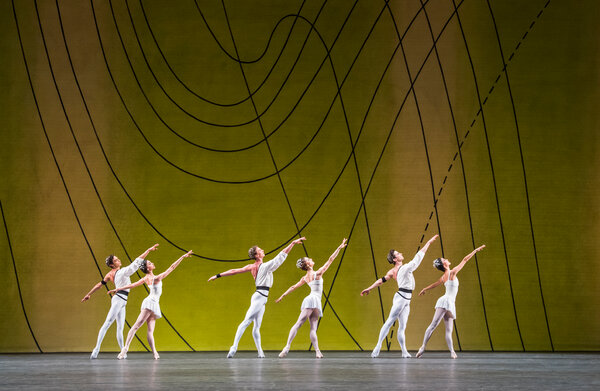 “I am frankly bored with too much characterization in ballet,” the choreographer Frederick Ashton said after the end of World War II. In the following year, 1946, he created “Symphonic Variations,” an 18-minute abstract work for six dancers set to César Franck’s score of the same name, which the Royal Ballet is showing online through May 2.

The piece is pure delight, from its first image of three men and three women standing in a meditative pose, one leg crossed in front of the other — a motif that Ashton comes back to throughout the piece. As the piano begins, the women start to dance, and a man joins them, much as in George Balanchine’s “Apollo” when the young god sports with his muses. But there is no story in “Symphonic,” just a smooth, cool flow of movement that sees the dancers configure and reconfigure in lyrical pas de deux, trios, quartets and solos in front of Sophie Fedorovitch’s yellow-green cyclorama, embellished with looping curves.

The dancers (Marianela Nuñez and Vadim Muntagirov are the central couple in this recording) never leave the stage; for some transitions, they simply join hands and run to a new spot. There is much in “Symphonic” that Ashton would later use again and again in his choreography: Look out for the pliant sideways bends, the low skimming lifts, the curving arms. Dancers have spoken about how hard the work is to perform, but its effect, as the writer Luke Jennings put it, is “of peace after war, spring after winter, space after compression.”

Watching: ‘Gallop Apace’ and ‘It Could Have Been Me … It Could Be Me’

These two short solos are well worth seeking out. They’re very different, but both were filmed by the cinematographer Trevor Tweeten, whose eye is finely tuned to the drama of the moving body.

In “Gallop Apace,” a film produced by the Seattle Dance Collective and available through April 25, Sara Mearns offers an incarnation of Shakespeare’s Juliet in a brief, near-static dance of compressed intensity, by Bobbi Jene Smith and Or Schraiber. In a news release, Mearns said that she has “longed for, but never been cast in the role of Juliet.” Her performance here is a tour de force of encapsulated erotic passion, waiting, grief, shame and anger, and Tweeten’s cinematography makes the most of Ms. Mearns’s beauty and interiority. Lingering close-ups alternate with her figure framed by a grand, near-empty room, in a space filled with the haunting sounds of Heitor Villa-Lobos’s “Bachianas Brasileiras No. 5,” sung by the countertenor Anthony Roth Costanzo.

David Adrian Freeland Jr., a member of the L.A. Dance Project, is a joyous presence when he offers online classes on the company’s app. But he is a somber spirit in his new solo, “It Could Have Been Me … It Could Be Me” (on the L.A. Dance Project website) performed at Hauser & Wirth’s Los Angeles gallery amid paintings by Amy Sherald.

Set to Joel Thompson’s “The Seven Last Words of the Unarmed,” recorded by the University of Michigan Men’s Glee Club, “It Could Have Been Me” evokes the words and actions of Kenneth Chamberlain, Trayvon Martin, Amadou Diallo, Michael Brown, Oscar Grant III, John Crawford and Eric Garner. Mixing ballet and more contemporary techniques while moving through the gallery spaces, Freeland offers a distinctive small portrait of each man in his last moments. It’s a moving tribute — and a protest, too.

Is it the slightly husky voice that she once referred to as “doing my best Lauren Bacall”? Is it Benji the dog? Is it her endearments (“Hello, my darling friends”) or her awareness that things may be getting too touchy-feely (“if you don’t relate to this at all, just breathe”)?

Whatever it is, there is something incredibly compelling about Yoga With Adriene, a long-as-your-arm series on YouTube featuring Adriene Mishler, a former actress who began to post videos in 2012, well before the pandemic made exercising at home a necessity. Mishler offers sequences for “renewal,” “a fresh start,” “uncertainty” and even for “when you feel dead inside.” There are monthlong courses, wake-up and go-to-sleep sequences and everything in between.

All are free, and you can rely on Mishler’s calm, humorous encouragement and lack of ego. There is no showing-off, no striving to accomplish, no leaving anyone out. Which isn’t to say she doesn’t encourage you to aim high. As she often says: “If you fall, I will catch you.”