The 18th series will begin in October but will be shorter than usual, and judge Bruno Tonioli will have a reduced role amid coronavirus restrictions.

The first three contestants were unveiled on The One Show.

Blue Murder star Quentin said she was “thrilled and terrified in equal measure” to be taking part.

The contestants so far…

This story will be updated as new contestants are unveiled 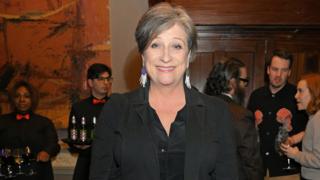 Caroline Quentin is the first celebrity contestant to be confirmed for this year’s series.

The award-winning actress and presenter is known for a range of acting roles, including Maddie in Jonathan Creek and DCI Janine Lewis in Blue Murder.

She has also starred in Kiss Me Kate, Life Begins and Life of Riley.

However, arguably her most famous role was playing Dorothy in the hit 90s sitcom Men Behaving Badly.

Quentin said she was “thrilled and terrified in equal measure to be taking part” in this year’s Strictly Come Dancing.

He played as a cornerback/safety in the National Football League (NFL) for the Dallas Cowboys.

Bell then played for the Houston Texans, where he was named a recipient of the Ed Block Courage Award, one of the league’s highest honours. He finished his professional career with the New York Giants.

Bell now co-hosts The Jason & Osi Podcast with another former NFL star, Osi Umenyiora, and the pair present the NFL Show on the BBC.

“Strictly is the epitome of British television and this year, more than ever, I’m so proud and humbled to be participating,” he said.

“Strictly was the first show I ever watched when I moved to the UK and I’m a massive fan. My six-year-old daughter never got the chance to see me run out on the field at an NFL game but she is very excited about me taking to the dance floor. I hope I can do her proud.”

Singer and actor Max George shot to fame as a member of boyband The Wanted.

George said he was “buzzing to be on Strictly this year”, joking: “I’m not really one for the dance floor, but I take a lot of comfort in the fact that Jay McGuiness set The Wanted’s bar so low.”

The Wanted had two number one singles in the UK – All Time Low and Glad You Came – with the latter reaching the top three in the US Billboard chart.

After The Wanted took a break, Max moved to Los Angeles to pursue an acting career and starred in the sixth season of Glee as Clint. He recently returned to music as a solo artist.