When Claes Oldenburg, widely recognized as the father of Pop art, heard that a visitor to his studio at the western edge of SoHo wanted to see drawings of the fictional land he invented as a child, he said, playfully, “At last!”

Now 90, excusing himself for taking a seat because “my knees aren’t reliable,” Mr. Oldenburg began poring through scrapbooks begun at age 8 of his imagined island nation called Neubern, complete with its own flag and crest, air force, movie theaters, battleships, hotels and newspaper. “Opera at its best by Oldenburg,” he read aloud from a headline on a meticulously drafted front page.

“I haven’t looked at this for quite a while,” said Mr. Oldenburg, who is best known for his monumental public sculptures of commonplace objects and food, including a giant cherry balanced on a spoon in the sculpture garden at the Walker Art Center in Minneapolis and a colossal rubber stamp in Cleveland. “I think I was quite good from the start,” he added.

The remarkably well-realized world of Neubern, presaging the future artist’s acute sensitivity to man-made environments and popular culture, is part of Mr. Oldenburg’s vast archive, which was recently acquired by the Getty Research Institute in Los Angeles, along with the papers of Coosje van Bruggen, the artist’s second wife and his collaborator from 1976 until her death in 2009. More than 2,000 drawings and collages, 450 diaries and notebooks and a trove of documentary photographs and footage, the majority of which have never been exhibited or published, head to Los Angeles later this month. 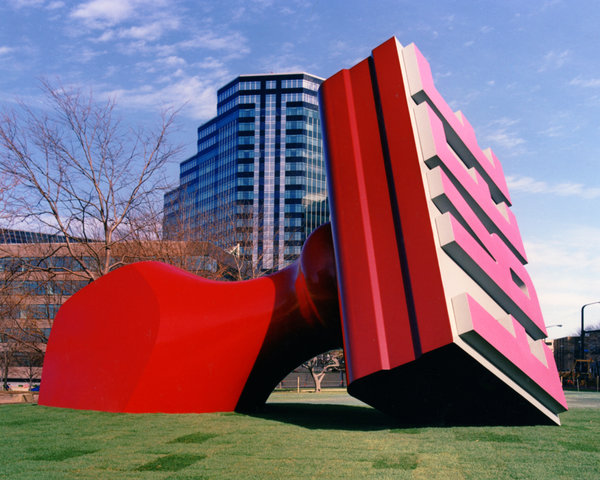 Mr. Oldenburg led an intimate tour of these artifacts, which are housed throughout the five-story industrial building where he has lived and worked since 1971. Accompanied by his daughter, Maartje Oldenburg, and Glenn Phillips, curator and head of modern and contemporary collections at the Getty Research Institute, the tall, courtly Swedish-born artist moved deliberately with a cane. Aided at moments in his recollections by his daughter, he operated the controls of the freight elevator like a captain steering his ship, cautioning his visitors at each landing that “it can be a little difficult here when you step off.”

He has kept a virtually uninterrupted set of handwritten diaries since 1956, the year he moved to New York from Chicago. They capture the inspiration he found in the gritty street life, what he ate and the many artists — including Jim Dine, Red Grooms, Lucas Samaras and his first wife, Patty Mucha — with whom he collaborated on performances and exhibitions.

He also kept journals titled “Notes,” filled with art ideas and typed on a 1926 typewriter. “Essentially my art is comic — a serious, absurd comedy … irreverent … erotical … moralistic,” an entry from the early 1960s reads.

Mr. Phillips was fascinated by how these written logs amplified the visual ideas that Mr. Oldenburg was sketching on separate notebook pages, often torn from little spiral pads he carried in his pocket. “I’ve never seen an artist recording their thought process as much as Claes did,” he said. “You have all of those parallel things side by side, so a scholar can probably find the origin of every idea that Claes had and then trace it through to the finished work.”

In a “Notes” entry from the early ’70s, Mr. Oldenburg wrote: “Drawings are for me the battleground of my being.” Looking at a sketch of an upside-down question mark on a skateboard, an unapproved proposal for a public sculpture outside the Reichstag in Berlin after reunification in the 1990s, the artist said, “I had forgotten completely about this.” He chuckled as he perused other never publicly seen drawings of baked potato clouds and a design for a tunnel in the shape of a nose. 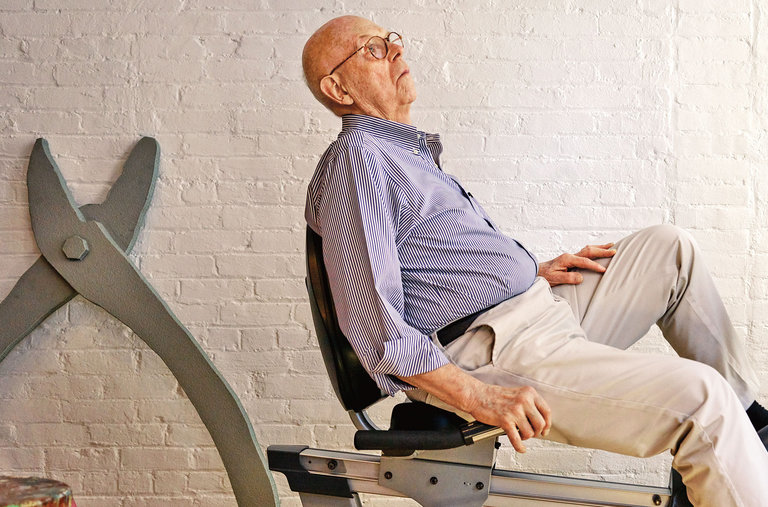 Ms. Oldenburg is editing a four-volume book of 1,000 of these notebook-page drawings to be published next year by Hatje Cantz. Her father has always spent a lot of time “arranging, filing, editing, discarding,” she said. “Maybe that’s where the creative sparks come from, through that process.”

Asked if he still keeps any kind of daily log, Mr. Oldenburg said: “I’ve been trying very hard to do it but it is difficult for me. You get older, as I have, and you really can’t do those things anymore. But I’m still trying.”

Mr. Oldenburg also struggled to weigh in on efforts to return “Lipstick (Ascending) on Caterpillar Tracks,” his first large-scale monument, completed in 1969, to the center of the Yale University campus from its current peripheral spot at Yale’s Morse College. The sculpture was commissioned 50 years ago by a group of architecture students headed by Stuart Wrede, who is leading the charge today to move it back.

“I haven’t been there for so long,” Mr. Oldenburg said of Yale, his alma mater. Stepping in, his daughter explained, “He’s supportive of Stuart and honored by the interest, but he doesn’t quite feel it’s his place to demand moving his sculpture back to a more prominent position.”

Reached by phone, Mr. Wrede, a former director of architecture and design at the Museum of Modern Art, recounted how he and other Yale students had helped Mr. Oldenburg construct the sculpture, a giant inflatable fabric lipstick mounted on a plywood base that resembles a set of military tank treads. As a surprise gift to Yale, the group carried it onto campus to great fanfare from the student body and planted it near the university president’s office.

“The lipstick was an open-ended protest monument, a symbol of dissent at the time,” Mr. Wrede said. It became a podium for students to speak out against the Vietnam War and in support of gay rights and the admission of women to Yale. The university came to embrace the piece after Mr. Oldenburg was the subject of MoMA’s first major Pop art show in 1969, but relocated it in 1974.

Before the lipstick was remade in durable metal, Mr. Oldenburg recalled how students would pump it up to inflate it before standing on the tank to give speeches. “The wonderful thing about it is that it will never stay up,” he said. In “Notes” from 1969, he called it a “bisexual object.” “There’s an element of humor in whatever I do,” he added, “but it also can be turned into something pretty serious.” Original film reels of the raucous 1969 campus events will go to the Getty, too.

Watching how the artist lit up throughout the house tour, one wondered about the emotional toll of all this work departing for a new home. “I’m at a stage where I can accept that sort of thing,” he said.

Ms. Oldenburg said the idea of ultimately preserving the work in his living space didn’t appeal to her or her father. “This really gives the archive a second life,” she said. “Claes’s philosophy always has been to put the work out in the world.

“Coosje shared that,” she added, referring to her mother. “I’m glad that she’s getting more attention now.”

The archive was acquired from Mr. Oldenburg for below fair market value, Mr. Phillips said, declining to give the price. Mr. Oldenburg’s 1974 sculpture “Clothespin Ten Foot” sold for more than $3.6 million at auction in 2015.

“You can look at almost every [postwar] artistic movement in the United States and Claes Oldenburg intersects with it — whether it’s performance, Pop, minimalism, postminimalism, conceptual art, installation art, postmodernism,” Mr. Phillips said.

Lisa Freiman, an independent curator who wrote her dissertation on Mr. Oldenburg, described the archives as “unprecedented” in their historical value for scholars. “I think they are going to become the most important primary research about art history in the ’60s and ’70s,” she said. “Public access is going to reveal a completely different narrative about Claes Oldenburg. All his work from the 1960s was coming out of a Neo-Surrealism and his interest in the unconscious.”

Ms. Oldenburg said her father had been worried about what would happen to all this material. “I hope this frees him to spend the time remaining doing new things that interest him,” she said. As he has become more frail and lost his mobility, Mr. Oldenburg has been taking photographs from his windows, drawn to the construction around his building since the neighborhood was rezoned several years ago.

“I’m shooting in all four directions while the world has been going on,” Mr. Oldenburg said, excited to show a set of large-scale prints in progress that he expects to exhibit at Pace Gallery. An image of a bright yellow crane and another of a convoy of buoyant cement trucks are consistent with the artist’s fascination with the street and mechanical objects.

“This is all right outside the door at 6 a.m. when you want to sleep,” he said. “First thing I do is go to the window. If it looks good, I take a picture.”

While his daughter expressed concern about whether her father would be able to live comfortably here with new developments poised to block two exposures, Mr. Oldenburg remained focused on his photographs.

He pulled out a print that showed an advertisement featuring a beautiful striding woman covering half the facade of a building. “It looks like she’s just a mile high,” Mr. Oldenburg said, beaming with satisfaction.