Why are restaurants in the city filling up at hours that were once unfashionably early? 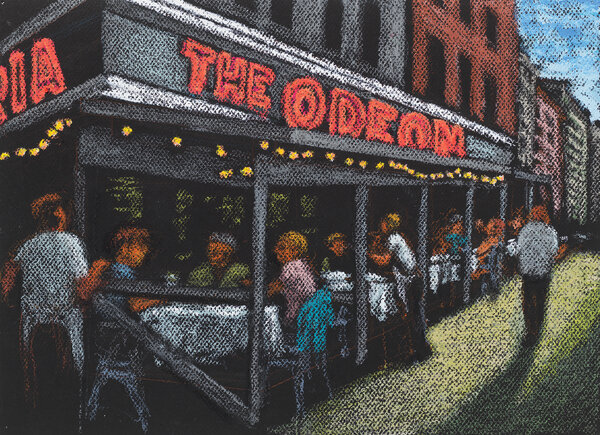 I WAS EATING French fries at the Odeon when I noticed that a server had begun to repeatedly check in. “Oh,” I realized, “she needs the table back.” It was 6:22 p.m. The restaurant was full. Once, 11:40 p.m. had been “a little too early for Odeon,” according to “Bright Lights, Big City,” Jay McInerney’s 1984 chronicle of druggy downtown Manhattan, which featured the spot’s red neon marquee on its original paperback cover. “We sometimes didn’t get busy until, like, 8:30,” says Roya Shanks, the restaurant’s longtime maitre d’. But lately, she reports, there are “waves of people making 5 o’clock reservations” — unheard of just a few years ago. Farther uptown, at Danny Meyer’s Ci Siamo and Gramercy Tavern, “People sit down at 6:30, and our restaurant is full,” says Megan Sullivan, the director of operations for Meyer’s Union Square Hospitality Group. “Eight o’clock is what was hot for New Yorkers,” adds Roni Mazumdar, a co-owner of Dhamaka, a difficult-to-reserve Indian restaurant on the Lower East Side. “Now, people email, ‘Can I come in for that 6:00 reservation?’”

Post-pandemic New York, a late-dining city by American standards — locals generally eat later in cities throughout Europe and South America, of course — has fallen in line with places like Los Angeles or Austin, Texas, in embracing the joys of twilight dinner. These days, the boundaries between one’s professional and social lives have collapsed: Though this fall may bring an uptick in commuting, only 8 percent of Manhattan employees have been going into an office five days a week, according to a May survey from the Partnership for New York City. And when work is home and home is work, an early meal is one of the easiest ways to assert that the day has come to some kind of conclusion. Not that 5 p.m. is necessarily when people want to eat, says S. Margot Finn, a food studies lecturer at the University of Michigan; it’s just “when they want to be somewhere else.”

In some ways, this shift was forced upon New Yorkers: The city’s Covid-19 curfews for eating and drinking establishments are long gone, but many restaurants have maintained truncated hours, whether because of staffing issues or customer demand. LittleMad, a NoMad French Korean spot, once remained open until 11 p.m. on weekends, but “the latest we were getting was a 9:30 — maybe a 9:45 because somebody was running late,” says its general manager, Thomas Dunn. (The restaurant now closes every day by 10.) And Mazumdar thinks these industry changes are here to stay — “We’re going to see this trend go on for at least the next half-decade, if not longer,” he says — another of the many small, perhaps trivial-seeming pandemic resets that may nonetheless affect how New York and cities like it function and do business forever.

THE IDEA OF an 8 p.m. dinner is a recent U.S. development. Into the 19th century, the day’s main meal was taken around noon: Most Americans were farmers, working in or near the buildings where they lived and doing physical labor that started early in the morning, and thus were ravenous by midday. Supper was the evening meal, light and usually served cold — a function, as the American writer Abigail Carroll explains in “Three Squares: The Invention of the American Meal” (2013), of how laborious the cooking of the era could be. During the Industrial Revolution, large numbers of middle-class Americans began commuting to factory and office jobs, which meant that, among other developments, the whole family was no longer necessarily home to eat together before noon. In the following decades, “just as the wealthy in the United States imitated aristocratic fashion, they tended to dine late” and have “chefs who cooked French food,” says Paul Freedman, a historian at Yale University. (This year, it seems, we’ve broken ranks further with those continental habits: When I asked Ed Thaw, the director of London’s Ellory Limited, whether the European capitals have also moved to earlier reservations, he said that, “thankfully,” everyone still wants to eat at 8 p.m. or beyond.)

New York is a place singularly obsessed with reinventing its own rituals and power moves — and there’s nothing like sharing agnolotti with friends before dusk on a Tuesday to demonstrate you’re a master of your own universe. Indeed, the once-geriatric stigma of being an early bird is gone. Or perhaps everyone’s become more geriatric: prioritizing sleep and giving one’s body a few hours to digest before bed; intermittently fasting and trading cocktails for all those new low- or no-alcohol aperitifs. In that light, eating early is just another way to reject the corporate hegemony that once defined a capitalistic city. “You dress up head to toe, go to dinner and then go home and watch your HBO show and [are] asleep by 11,” says Anthony Geich, the maitre d’ at Sona, a gold-pillared Indian restaurant in the Flatiron district. “The pandemic pushed us all into early retirement.”