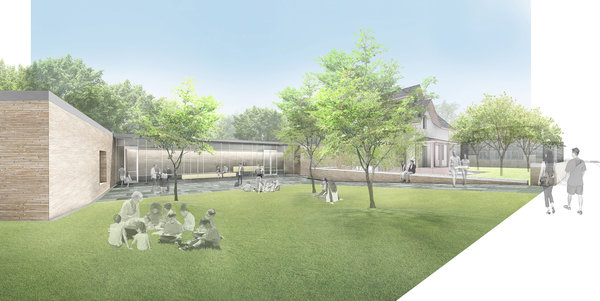 Oak Park, Ill., the Chicago suburb where Frank Lloyd Wright spent the early years of his career, may be welcoming a new building into the architect’s fold.

The Frank Lloyd Wright Trust this week announced plans for a visitor and education center to be built at the architect’s former home and studio, which has been open to the public as a museum since 1974.

The site is one of dozens the architect designed in the Chicago area, and one of five at which the trust operates public programs and tours. When a property adjacent to Mr. Wright’s former residence went up for sale two years ago, the trust bought it and went to work planning how to better serve the estimated 90,000 people who visit his home each year.

“It has for a long time been apparent that having a visitor’s center would be an important next step,” said Celeste Adams, the trust’s president and chief executive. “But of equal importance is a need to expand programming and provide a deeper educational impact on visitors and on the community in which we exist.”

The conceptual design, by the Chicago architect John Ronan, includes plans for a new ticketing area, reception hall and gift shop, as well as an educational hub for design classes, artist showcases and private events. The plan also includes an outdoor plaza connecting the grounds of Mr. Wright’s home and studio to the center with walkways and terrace areas, and a lawn for outdoor community events and lectures.

Ms. Adams says that the expansion, which would require approval from the village of Oak Park, could cost an estimated $5 million to $10 million, which the trust would need to raise. Optimistically, she said, construction could begin by spring of 2020, and take roughly 10 months to complete.