LONDON — “I met her on a dating app … I met her in a pub,” said Ellie Pennick, 24, director and founder of Guts Gallery, recalling on Friday how she had discovered some of the young artists whose work she was selling from a pop-up space near Carnaby Street during the debut edition of London Gallery Weekend.

Pennick, who describes herself as a “working-class, queer Northerner with no art background,” was one of more than 130 London-based dealers holding live exhibitions during this collaborative three-day initiative from June 4-6, which aimed to reinvigorate the British capital’s contemporary art scene after months of coronavirus-induced lockdowns.

Unable to afford the fees to study sculpture at London’s Royal College of Art and frustrated by the art world’s prevailing systems, Pennick said she decided to become a nomadic dealer who uses pop-up shows and the internet to promote edgy new talent.

“I looked at the business model and saw that the main expense was space. So I thought I’d take that out,” Pennick said. Her participation in Gallery Weekend was supported by the renowned London dealer Sadie Coles, who lent her a small retail unit in Soho.

Pennick exhibited 10 works by artists she is “championing” (she prefers the term to “representing”). Seven of them sold at the Friday opening, led by “6 Red Chillies,” an expressionistic self-portrait by the London-based Saudi Arabian artist Shadi al-Atallah. That mixed-media painting was bought by a London collector for 8,500 pounds, or about $12,000.

Gallery weekends, which encourage art lovers to wander from showroom to showroom across a city, have become a successful formula for dealers in venues such as Berlin and Zurich, which, unlike London, don’t host the major art fairs and auctions that in the past have been magnets for international visitors.

But the double punches of Brexit and the pandemic have damaged London’s position as the capital of the European art market. At the end of May, the 12-month total for auction sales at Christie’s, Phillips and Sotheby’s in London was $1.7 billion, $1 billion down on the equivalent total in 2019, according to Pi-eX, an art market research company. Some major-name galleries in the city have closed, and travel restrictions threaten to turn a destination international fair such as Frieze London in October, if it goes ahead at all, into a scaled-down event.

Jeremy Epstein, co-founder of London Gallery Weekend, said, “Galleries and artists alike have had to update their relationship with their audience.” He acknowledged that a local crowd, rather than a global one, would be visiting the event, but said he hoped that, in the future, it would become as important an attraction for international collectors as the dealer shows that coincide with Frieze.

Judging by the exhibitions on view, North American-based artists still regard London as an important gateway to recognition — and acquisition — in Europe. Painting, particularly figurative painting, predominated, as it currently does at big-ticket international auctions.

White Cube gave over its central London gallery to a show of 20 recent works by the lauded Brooklyn-based French artist, Julie Curtiss, whose surreally stylized figure paintings of women, often focused on shoes and hair, have sold for more than $400,000 at auction. 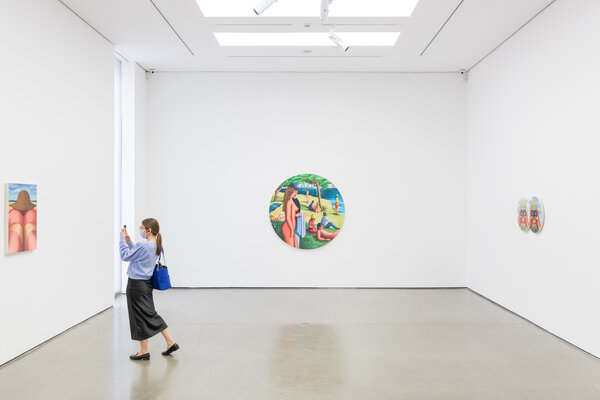 The centerpiece of the exhibition, Curtiss’s first in London, was a circular 2021 canvas, “Le Futur,” showing blank-faced figures on a riverbank that updated Georges Seurat’s Pointillist masterpiece, “A Sunday Afternoon on the Island of La Grande Jatte.”

On a rainy Friday morning, the White Cube show attracted a steady trickle of local visitors, including Patsy Prince, a London-based actress and collector.

“It’s been a nightmare. We’ve been starved,” Prince said. “I can’t look at any more art online. I want to smell it. I want to taste the creativity. You can’t do that on Zoom.”

Curtiss’s paintings were priced between $40,000 and $170,000, and all had found buyers, according to Paul Garaizabal, a sales executive at White Cube.

Jaclyn Conley, a Canadian figurative painter working in New Haven, Conn.; Leidy Churchman, a Maine-based painter whose work is suffused with Buddhist philosophy; and Alvaro Barrington, a New York- and London-based multimedia artist, born in Venezuela and influenced by rap culture, are all names that have yet to make much impact at auction. But their works have been exhibited in prestigious museums, and that fact appeals to buyers who want to stay ahead of the market curve.

New works by Conley, whose paintings have been collected by Barack and Michelle Obama, attracted multiple offers at the Skarstedt gallery in central London. Not far away, the Rodeo gallery found buyers for all 12 of its 2020 paintings by Churchman. Over in East London, Emalin had takers for all 12 of its new works by Barrington, made in London during the lockdown, featuring paintings in sculptural concrete frames inscribed with rap lyrics. Prices at those shows ranged from $12,000 to $95,000. Most of the works were acquired by buyers who had not seen the pieces in person. “People have become more relaxed about buying from JPEGs,” said Katy Green, Rodeo’s London director.

Thanks to the wonders of the internet, works by such sought-after names could, conceivably, have sold out at any gallery weekend, even if held in much smaller outposts of the art world. So where does this leave London?

The British capital is a very big city with a large number of dealerships scattered across a wide area. Unlike more compact centers, such as Berlin, Zurich or Paris (which last week held a similar event), London is not a city that lends itself to the gallery trail format. Yet in reality, these events, like so much that now goes on in the art market, have become live/digital hybrids.

“Sales are mostly online. Even our London collectors buy over the internet,” said Krittika Sharma, co-founder of Indigo+Madder, one of a cluster of new galleries that has sprung up over the last two years in the Deptford district of southeastern London, not far from Goldsmiths, the college where famous British contemporary artists including Damien Hirst studied.

By the Saturday of London’s Gallery Weekend, Indigo+Madder, which specializes in contemporary art from South Asia and its diaspora, had sold 10 out of 13 multimedia paintings made during lockdown by the London-based artist Haroun Hayward. Influenced by electronic music, African and Middle Eastern textiles and 20th-century English landscape painting, these meticulous, eclectic images were priced between £3,950 and £650. One sold to a Swiss collector.

Hayward said that he was optimistic about London’s ability to remain a vibrant artistic hub.

“I’ve been kicked out of two studios by developers,” said Hayward, who now works from home in East London. “But London’s pretty wild. It will always have a punk streak. The kids are getting it done, but not in the places we know about.”