Helen LaFrance, a self-taught artist whose vibrant and intimate “memory paintings” of scenes from her childhood in rural Kentucky brought her renown late in life, died on Nov. 22 at a nursing home in Mayfield, Ky. She was 101.

Her death was announced by Wanda Whittemore-Stubblefield, a longtime friend.

In glowing colors and sharp brush strokes, Ms. LaFrance painted church picnics and river baptisms; tobacco barns; backyard gardens with geese and children racing through them; kitchens with bushels of apples and jars of preserves shining like stained-glass windows. Her exuberant scenes of rural life invited comparisons to Grandma Moses, Horace Pippin and other regional painters who drew from their memories to tell stories about a vanished time and place.

“It’s just a way of reliving it all again,” Ms. LaFrance told a television interviewer in 2010. The next year she told another interviewer, “If I do something somebody likes, well, I’m satisfied because somebody liked what I did, but I don’t think it’s important.” 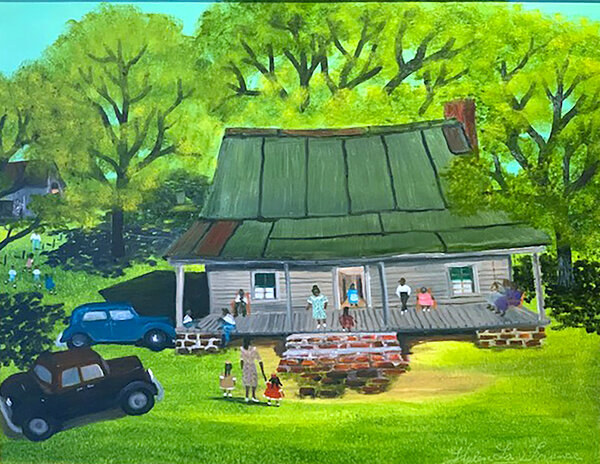 “She’s a self-taught Black artist who paints her memories of a particular time and place,” Ms. Moses Shelton said in a phone interview. “She grew up under Jim Crow. She was 10 when the Great Depression hit.

“Her art doesn’t reflect the pain of that era,” Ms. Moses Shelton continued. “Instead what comes through is joy, and the values of family and work. Her family owned and farmed their own land when sharecropping was the norm, and they were self-sufficient and lived in dignity. Her blend of personal experience, Black American culture and heritage and her skill all come into play to make her work unlike anybody else’s. She’s an authentic American voice.”

Helen LaFrance Orr was born on Nov. 2, 1919, in Graves County, Ky., the second of four daughters. Her parents, James Franklin Orr and Lillie May (Ligon) Orr, known as Bud and Hon, grew tobacco and corn.

Helen did not attend much school. Her parents instructed her in reading and math, and her mother taught her to paint, guiding her hand and helping her mix colors from dandelions, berries and Bluette laundry detergent. She and her sisters worked in their family’s fields, and Helen drew after her chores were done. She recalled loving the smell of the crayons her mother would bring her.

Ms. LaFrance lived and worked most of her life no more than 10 miles from her birthplace. She worked in a tobacco barn and in a hospital as a cook. She also made custom whiskey decanters for a local ceramics company and worked as a retoucher in a photography studio. She owned property, commercial spaces and land.

She always painted, but she did not do it full time until the 1980s, when she started selling her work to neighbors and at local art shows and country fairs. She also made wood carvings and quilts. She lived in a double-wide mobile home and used an old school bus that was parked on her property as a studio before moving into a house in Mayfield.

Gus Van Sant Sr., a Mayfield native and the father of the filmmaker, discovered her there in the early 1990s; about a decade earlier, his wife, Betty had bought him a Helen LaFrance painting of a tobacco barn, and the couple looked her up when they moved back to Kentucky.

Mr. Van Sant was taken with her work and concerned that she was not getting the value she deserved from sales of her paintings. He and a friend reached out to folk art galleries and institutions around the country on her behalf, and helped her set up a bank account so she would be paid directly. Mr. Shelton also began selling her work and last year made a short documentary film about her life.

In 2011, Ms. LaFrance received Kentucky’s Folk Art Heritage Award. Oprah Winfrey, Bryant Gumbel and the collector Beth Rudin DeWoody have all bought her work, which is in the permanent collections of the Saint Louis Art Museum and the Owensboro Museum of Fine Art in Owensboro, Ky.

Soft-spoken, modest and religious, Ms. LaFrance was not given to long expositions about her life or her motivations. She liked to say, when pressed for details, “Some things should be left alone.”

She was married five times: twice to Elvis Lynn (back to back, as Ms. Whittemore-Stubblefield, said) and once each to Lynn Rhybon, Burt McCampbell and A.D. Whittemore, a preacher. All the marriages ended in divorce. She leaves no immediate survivors.

She was extremely self-sufficient, Ms. Whittemore-Stubblefield said, and not “the soothing homemaker type.” She said that when Ms. LaFrance left her last husband, the preacher, she waited until he had driven to his church on a Sunday, packed up her belongings, and was gone by the time he returned.

She once told an interviewer: “Think twice, say it once. If you think you’re right, know you’re right before you do something. If you don’t know what you’re doing, ask God about it.”

In addition to domestic and rural scenes, Ms. LaFrance made religious paintings of visions inspired by her knowledge of the Bible. That work was both terrifying and ecstatic, and markedly different in technique from her normal output, more Georgia O’Keeffe than Grandma Moses. While she was happy to elaborate on a painting of her local church’s homecoming picnic, describing how families would come once a year from all over the country, or to tell a tale about getting the spins from chewing tobacco, prompted by a scene she had painted of tobacco drying in a barn, she kept quiet about her religious work.

Mr. Shelton once brought a friend, Eugene Collins, a contractor and businessman from Nashville, to visit her. When he saw her school-bus studio, which she had long complained about — it was as hot as an oven, she said — he promised to return and build her a proper one, in exchange for some of the religious paintings. “Just keep painting,” he told her. He made her a spacious, airy building, setting it onto a rise on her land.

Ms. LaFrance worked on more than one canvas at time, a method she developed late in life that allowed her to keep painting instead of waiting for a piece to dry. Mr. Van Sant said she extended her practice further, onto tiny canvases, as a way of using up the paint on her brushes.

“They were really terrific,” he said. “I remember one was a kitchen with ornate wallpaper, maybe four by four inches, and Helen said she was selling it to a person she knew. I asked her what she was going to charge.