This weekend I have … 3 minutes, and I want something darling 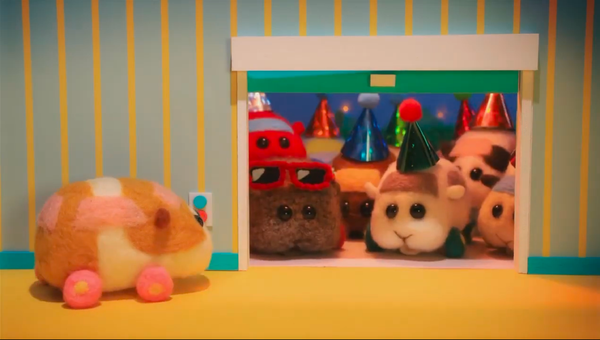 ‘Pui Pui Molcar’
When to watch: Now, on Netflix.

This Japanese import has no dialogue — just the squeaks and gurgles you would expect from the creatures at the show’s center, who are a hybrid of guinea pig and car. They are adorable and ridiculous, sweating and weeping their way through uncomfortable parking lots and festive but clandestine parties, outrunning zombies, avoiding traffic jams. In addition to its ecstatic cuteness, “Pui Pui Molcar” has a distinctive aesthetic that’s big on texture and often feels exactly like a child’s playtime tableau. If you follow multiple animals on Instagram, have ever saved an eraser that was too kawaii to use, or if you just enjoy impishness, watch this.

‘Made for Love’
When to watch: Now, on HBO Max.

Cristin Milioti stars as Hazel, who after 10 years of marriage to a tech mogul realizes she wants out of the artificiality and constant surveillance of their relationship. More specifically, she wants to remove the chip he just implanted in her brain. The show’s themes are bleak, and in the episodes made available to critics, it lacks some of the zest and characters of the novel on which it is based. But the show is still an intriguing and warped, bouncy comedy. (Alissa Nutting, who wrote the book, is among the show’s writers and producers.) HBO Max just released the first three episodes; three more will be released Thursday, and the final two come out on April 15.

… many, many hours, and that’s my purse

‘King of the Hill’
When to watch: Now, on Hulu.

As is true of a lot of shows that debuted in the 1990s, not every aspect of “King of the Hill” has aged well. But much of it has, particularly its overall tenderness, its desire to see the best in its characters. And because there are 258 episodes, this loving abundance extends to the viewer, too. The show’s restrained visual palette obscures its emotional perceptiveness and complexity, how richly it invests in its world of small-town Texas and how well it understands families. As a bonus, it’s full of helpful guidance: “In beauty school, as in life, you only get one head.”