In Showtime’s new crime drama “City on a Hill,” Jackie Rohr is a cocaine-snorting, corrupt and racist F.B.I. veteran who longs for the days when the “bad men” were in power, and Decourcy Ward is a principled new assistant district attorney from Brooklyn, determined to “rip out the [expletive] up machinery” in 1990s Boston.

The characters — played with flamboyant vigor by Kevin Bacon and simmering fortitude by Aldis Hodge — shouldn’t like each other, or even be able to work together. And for much of the pilot episode, they don’t.

But one morning last April, as Bacon and Hodge filmed a scene for a later episode in Decourcy’s office — actually a set at Steiner Studios in Brooklyn — the mood was different. The characters were on good terms, maybe even kind of pals.

Decourcy shared his uneaten eggs with Jackie. (In between takes, Bacon joked about being too full to partake in the handsomely stocked craft services.) Both sported shiners on their faces but they didn’t give them to each other; Decourcy’s came from a confrontation with a church minister, Jackie’s from an “alcohol-induced haymaker” at the V.F.W. When their easy chatter was interrupted by a distressing call Jackie received on his period-appropriate oversized mobile phone, Decourcy expressed concern and moral support.

That could be the tagline of “City on a Hill,” which takes place during a time when crime rates and racial tensions in Boston were exceedingly high until a coalition of community groups developed an anti-violence mission that would prove successful in the late ’90s.

The show was created by the relatively unknown writer (and Boston native) Chuck MacLean, but it sports an impressive pedigree of Hollywood veterans, including the executive producers Ben Affleck, Matt Damon and Barry Levinson. It’s a sprawling ensemble piece that’s part procedural and part machismo-fueled interracial buddy tale: Decourcy and Jackie are brought together through their mutual interest in taking on a family of armored car robbers in Charlestown led by Frankie Ryan (Jonathan Tucker). By the end of the pilot, they’re swapping personal stories and strategizing how to build a potentially career-defining case over drinks in a bar.

Their dynamic may call to mind Tibbs and Gillespie or Murtaugh and Riggs, but the show’s origins lie in “The Town,” the 2010 crime thriller Affleck co-wrote, directed and starred in, which also centered on criminals in the working-class, heavily Irish Charlestown neighborhood.

Affleck was inspired to develop “City on a Hill,” he wrote in an email, after “doing so much research for ‘The Town’ and not being able to tell the scope and scale of the story the research yielded.” The series offers a more expansive means “to explore the city and in particular what was going on politically, socioeconomically, racially and culturally at the time I kind of came of age there,” he wrote. 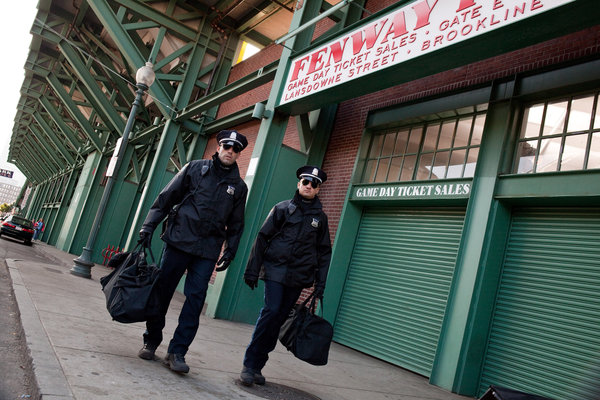 Affleck tapped MacLean, a self-described “bum from Quincy, Mass.” with an unmistakable accent to match, who had worked with Affleck’s brother, Casey, on a script for a movie about the Boston Strangler that never got made. The veteran writer and producer Tom Fontana, who specializes in character-driven dramas set in distinct environments (“St. Elsewhere,” “Homicide: Life on the Streets,” “Oz”), was impressed by the pilot and came on as the showrunner and an executive producer after “City on a Hill” was picked up by Showtime.

While this high-wattage project is MacLean’s first foray into TV, his fascination with Boston history — his home in Los Angeles contains “wall-to-wall” crime and newspaper memorabilia stretching back to the 1930s — made him a good fit for Affleck’s vision.

“I didn’t want to spend five years talking about bank robbers and I don’t think he did either,” MacLean said. “So we started talking about the different things that were going on in Boston in the early ’90s.”

A lot was going on. The city was plagued by violent crime and racial tension, generating plenty of headlines that the series occasionally rips from, à la “Law & Order.”

It begins by citing the notorious case of Charles Stuart, a white Bostonian who in 1989 claimed that a black gunman attacked him and killed his pregnant wife. More than two months passed — during which the police went on a manhunt and Stuart eventually identified someone as the attacker from a lineup — before Stuart’s story fell apart. His brother Matthew went to the police and outed him as the real killer.

The incident exacerbated the already tense relationship between law enforcement and the black community. “The Boston police and the city of Boston — from the end of World War II, there was at least one time in every decade where they became a national embarrassment,” MacLean said.

“The Stuart one was the first time that I think the circumstances lined up that it was particularly bad, but then in the aftermath of it, it allowed for a lot of good to happen,” he added. “That’s the theme that I wanted to look at.”

MacLean, 33, was a child during the era of “City on a Hill.” But the journalist and author Michele McPhee, a writer for the show, was then a young investigative reporter at The Boston Globe, and recalls well the city’s struggles during those years.

“A little girl gets shot off a mailbox,” McPhee said. “Jermaine Goffigan — whose face I’ll never forget — he’s counting Tootsie Rolls from Halloween, still in his costume, when he gets hit by a stray bullet.”

“The city had had enough,” she added.

Jackie and Decourcy serve as the thematic entry point, their unlikely partnership an explicit allegory for the Operation Ceasefire program — also known as “The Boston Miracle.” Black clergy members, police officers, probation officers and outreach workers — once unaligned with one another — joined forces under the direction of the Harvard University criminologist David M. Kennedy to focus on black youth in high-crime areas. After it was carried out in 1996, Boston began to see a decline in homicides, and similar programs were replicated in other cities like Cincinnati with success.

“These two characters are polar opposites,” Fontana said. “But for at least a period of time, [they] need each other and are willing to overlook certain things in an effort to achieve something greater.”

The show’s creative team is primarily white, a liability for a story that aims to authentically portray a time and place defined largely by racial tension. (This season there was one biracial writer, J.M. Holmes, and one Latino writer, Jorge Zamacona.) But “City on a Hill,” doesn’t shy away from depicting its setting’s deeply ingrained racism: Within the first minute of the first episode, Jackie flippantly slings around the N-word.

“That was the world I grew up in,” MacLean said.

But, he added, he spoke frequently with Hodge and Lauren E. Banks, who plays Decourcy’s wife, Siobhan, about their perspectives. “As much as I wanted my story told correctly, I wanted everyone else’s involved in this to be told correctly,” he said.

Hodge said he “chimes in quite a bit” when it comes to the show’s depiction of Decourcy, who is partly inspired by Boston’s first black district attorney, Ralph Martin.

“That’s something that’s a priority going forward, just to get more black voices in the writer’s room,” he said. “Unless you’ve actually been the victim [of racism], you actually don’t know what it is.”

Stories about such fraught but fruitful partnerships risk turning a racist like Jackie into a sympathetic figure by having him work well with Decourcy. But in the early episodes, at least — the first 3 of 10 were made available in advance — the show is less about Jackie learning to not be a terrible human being than Decourcy’s struggle to take down the (white) status quo without becoming like it.

Decourcy is the “hero of the series” who must “deal with the devil” Jackie, MacLean said.

For Hodge, the question is: “How far will he go before he turns into Jackie Rohr?”

As for Jackie, a defining quality, Bacon said, is that he’s “so narcissistic that his belief that the ends justify the means” allows him to behave unethically. (The character is a loose composite of the F.B.I. agents H. Paul Rico, who was indicted on a charge of murder shortly before his death; John Connolly, who aided the mob boss James (Whitey) Bulger; and Dennis Condon.)

The creative team strove for authenticity in depicting the city of Boston as well, even though it almost never actually films there.

The pilot was shot in and around the city, but the production moved to New York once the series got picked up — exterior scenes were shot in Staten Island, New Rochelle, White Plains and the Bronx. (A few scenes have since been filmed in Boston.)

This decision came down to practicality: Boston lacks soundstages and the city is generally “much prettier now than it was” in the ’90s, said McPhee, who served as a kind of Boston credibility consultant.

“I was getting ready to eye-roll and say, ‘Oh God, we’re never going to get Boston,’” she said. But she was impressed with the attention to detail, adding, “There’s a set that represents [the] Bromley Heath [apartments] that I felt like I was walking through the halls of Bromley Heath.”

(“Believe me, it wasn’t my decision,” MacLean said of the move to New York.)

It’s too early to know whether there will be a second season of “City on a Hill,” though MacLean said he’s plotted out five seasons’ worth of material for the leads. According to Affleck, the plan is to move the action from Charlestown to Roxbury if the show gets renewed, and then to a different neighborhood each season, similar to the “The Wire” and its thematically distinct chapters.

Aisha Harris is an assistant television editor on the Culture Desk. Previously she was a culture writer and editor for Slate and host of the film and TV podcast “Represent.” @craftingmystyle