We didn’t know what to do about this piece.

Whether I, a Black critic, should review Aleshea Harris’s breathtaking “What to Send Up When It Goes Down,” even though my former colleague Ben Brantley, a white critic, already reviewed and raved about the show’s initial run in 2018. Whether I should be in conversation with a white critic or another Black critic.

This is the piece I came up with: I’m reporting on a moment in time when I, a Black critic and a Black woman in America, felt the safest and most embraced by my Blackness in a theater.

On a gloomy Friday evening, I went to BAM Fisher for the play, being presented by the Brooklyn Academy of Music and Playwrights Horizons in association with the Movement Theater Company. I headed to the downstairs lobby, which featured portraits of Black men and women killed by the police. The room was full of Black people.

If you can’t imagine the comfort of being with people who look like you in a space where art is being made, it’s something like sipping from a steaming cup in the dead of winter: the warmth is precious, immediate and shocking all at once.

Harris, a veritable poet of a playwright who also wrote “Is God Is,” describes the play as “a space in the theater that is unrepentantly for and about Black people” — “a space for affirming, and reflecting.” She calls it “an anger spittoon” and “a dance party.” It’s true that “What to Send Up” feels less like a play than it does a series of cathartic experiences — which isn’t to say it isn’t beautiful theater, because it is still very much that.

Early on in the show, directed by Whitney White, in a kind of intimate workshop, one performer (Kalyne Coleman, who is stunning as both a performer and the host) asks the audience members, who are all standing in a large semicircle, to step forward if they’d ever witnessed a race-based act of police brutality or if they’d ever been a victim of a racially motivated act of police brutality. Most people stepped forward after the former. About a dozen people, of the 50 or so in attendance, stepped forward in response to the latter, including a 30-something Black couple.

Then a series of skits charts all the horrific ways Black people are stereotyped and generally misrepresented in art and in real life. There are biting parodies of troubling Black tropes in entertainment, like the supplicant servant figures in “Driving Miss Daisy” and “The Help.” And there are surreal monologues (one woman recounts how she snatched the mouth off a white man and how it flopped like a fish) alongside stepping, choral songs and spoken word.

This was a show that validated my fear and sorrow as a Black citizen of this country and yet still alerted me to the privilege of having had a sheltered suburban upbringing. I thought about the first time someone directly called me the N-word, casually slinging it to the side of my face while I was walking through Midtown Manhattan one weeknight. I thought of all the times I’ve felt uncomfortable as a Black person in a space — in my career, in academia, in social settings. I thought about my growing discomfort around police officers, especially in the last several years.

It’s rare for a play to allow me access to both that validation and that awareness of my privilege — because so rarely is Blackness shown onstage and so pointedly aimed toward a Black audience with all the nuances and variations that come within the experiences of their lives. 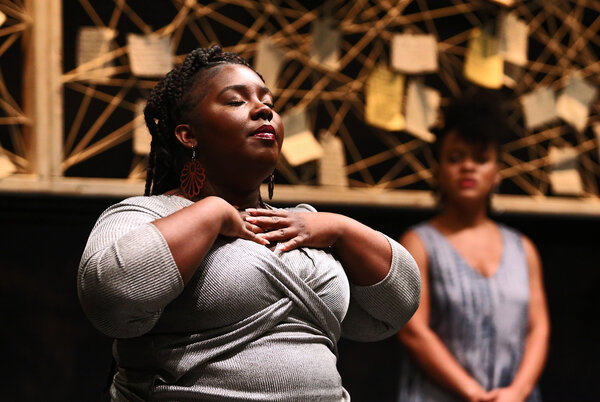 At one point in the show, there is a symbolic Black death, tender though devastating, followed by an extended moment of silence. At another point, we were invited to write messages to Black Americans — they would join the scores of postcards with messages from other audience members that adorn the walls of the theater. Later we were asked to let out a collective, soul-cleansing scream — something I, an introvert, would usually pass on. But the mighty wall of sound led by Black voices — a great sound of exaltation and frustration and defiance all at once — invited me in, and my own voice, unsteady and hesitant, joined. It was like stretching a muscle I never realized existed; the feeling was overwhelming in its depth and release.

But, I wondered, can any such space truly and wholly be for a Black audience, especially when there are white audience members there, too? Some part of me was quietly policing the white people in the theater — how they responded to certain scenes and questions, if and when they laughed at certain jokes, if they seemed to hold themselves accountable, if they were taking up too much space.

As a critic and a reporter, part of what I do is read the room — how and why audiences react to the happenings onstage, and what that says about the work. But here, I didn’t want to care. In the show’s final minutes, non-Black audience members were invited to leave the theater and gather in the lobby. When I recounted this to a friend afterward, she asked what the white audiences saw, if anything, but I don’t know and — I know this is shameful to admit — I don’t care.

I am concerned only with how Harris’s play made me and the other Black people in that room feel. I noted how the couple from earlier clutched each other through most of the show. At some point, the woman left and returned wet-eyed with a handful of tissues. Her partner lovingly rubbed her back.

I also ended the show in tears, which I hadn’t expected — but among Black performers and audience members, I felt newly seen and safe. I had a fresh moment of realization, considering my duty as a Black critic. And as a Black poet, I had a moment of inspiration: I want more art like this.

Affirmations, exclamations of joy, moments of commemoration: I’ll skip the particulars of those last few holy minutes that were exclusive to the Black audience. I want to honor and extend the loving, communal Black space Harris creates in an art form that has so few of them. And I want to keep it for myself — and for that couple and for the Black woman who, earlier in the show, had said she wished for a future version of this country where she could feel more “human.”

I took a slow tour of the theater after the show, and read the messages others had left. “When you breathe, the universe sings,” one notecard read. Any other day in any other place in America, I’d probably find that sentiment too hokey. When have I ever heard singing when inhaling the air of this supposedly great free nation?

Leaving the venue, I thought of what a pleasure and privilege it was to receive theater gift-wrapped especially for me. And what a pleasure and privilege it is for me to laud it. But the greater pleasure? To tell you something special happened among the Black people in a theater with a qualifier: This play, non-Black theater lover, is not for or about you, and that’s perfectly fine.

What to Send Up When It All Goes Down

Through July 11 at BAM Fisher; bam.org