It’s hard to believe that audiences first saw Jamie Lee Curtis as Scream Queen Laurie Strode in the Halloween franchise 45 years ago. The prolific actress opened up about the final installment in the horror series and something else that tends to be a little scary for many women: aging.

For a moment, aging was something that concerned Curtis, and she even pursued cosmetic procedures. “I did plastic surgery,” she told TODAY in a recent interview. “I put Botox in my head. Does Botox make the big wrinkle go away? Yes. But then you look like a plastic figurine.”

Back in March, at the Radically Reframing Aging Summit hosted by Maria Shriver, Curtis discussed how the narrative around aging needs to change. “This word ‘anti-aging’ has to be struck,” she said. “I am pro-aging. I want to age with intelligence, and grace, and dignity, and verve, and energy.”

She’s even given two daughters Annie and Ruby, whom she adopted with husband and mockumentary filmmaking legend Christopher Guest, some pretty solid advice: “Don’t mess with your face.”

“Walk a mile in my shoes. I have done it. It did not work. And all I see is people now focusing their life on that,” Curtis said of botox and plastic surgery. Taking care of yourself is one thing; making anti-aging your entire life creeps into Death Becomes Her territory. 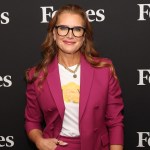 
Brooke Shields' Community-Minded, Empowering Philosophy on Aging Is Everything

Curtis previously opened up about how freeing it was to not suck in her gut for her role as the IRS agent in Everything Everywhere All At Once. “I wanted to just be truthful to this woman,” she told Entertainment Weekly back in March as the film was released. “In the world, there is an industry — a billion-dollar, trillion-dollar industry — about hiding things. Concealers. Body-shapers. Fillers. Procedures. Clothing. Hair accessories. Hair products. Everything to conceal the reality of who we are. And my instruction to everybody was: I want there to be no concealing of anything.”

It’s so awesome to see stars like Curtis fight to combat the negative stereotypes of aging not just in Hollywood, but as a whole.

Before you go, click here to see actors who have spoken out about pressure to get naked for a role.