It’s an annual tradition that Justin Theroux hasn’t missed a beat with — sending birthday wishes to ex-wife Jennifer Aniston. The sweet message was spotted on his Instagram Story on Thursday with a beautiful black-and-white photo of her standing on a spiral staircase. It’s a flattering photo that needs no photo approval; Theroux did right by Aniston on her 52nd birthday.

The message itself was short, but warm, “Happy Birthday, @jenniferaniston,” he wrote. “[red heart emoji] you B!” Aren’t you dying to know what the letter “B” stands for? What is his nickname for one of television’s biggest stars? We are dying to know. 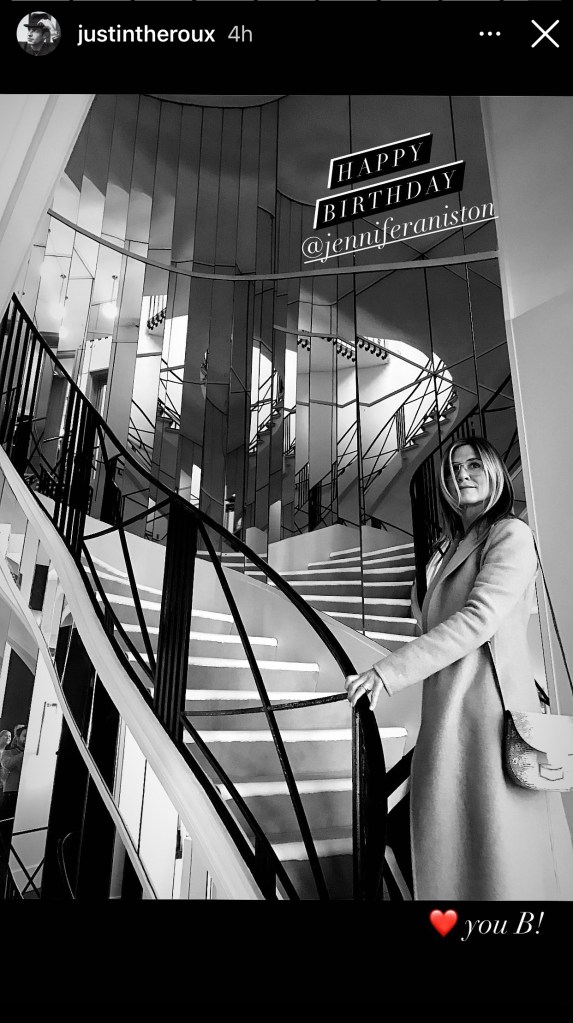 When the couple split just after Valentine’s Day in 2018, they promised their fans that they “were determined to maintain the deep respect and love that we have for one another.” They haven’t disappointed us yet. They’ve moved forward as true friends, who just couldn’t make it work on a romantic level — and that’s totally normal.

Even though Theroux now resides in New York City, he celebrated Thanksgiving with Aniston in 2019 and he’s made sure to acknowledge her birthday each year since their split. There’s no bad blood between them, and Aniston is always the first to say that her marriages — yes, including Brad Pitt — were not failures despite the outcome.

“My marriages, they’ve been very successful, in [my] personal opinion,” she told Elle magazine in 2018. “And when they came to an end, it was a choice that was made because we chose to be happy, and sometimes happiness didn’t exist within that arrangement anymore.”

It’s good to see exes root each other on, even if the romantic element didn’t work out for them. Aniston and Theroux are proving that friendship after a divorce can have a very sweet existence.

Before you go, click here to see celebrity exes who will always be friends.