To the delight of every Bennifer fan out there, Jennifer Lopez and Ben Affleck are still going strong as their relationship gets more serious. The couple’s renewed romance took them to Avra Beverly Hills Estiatorio restaurant on June 25, where they enjoyed a room all to themselves for two hours, according to a People source. The date was definitely one of the couple’s more low-key nights out, especially considering that the pair has already traveled to Montana and Miami together. While reports of Lopez spending “as much time as possible” with Affleck may increasingly paint a picture of an intense summer fling, we’re hoping against hope that these two last long past fall. 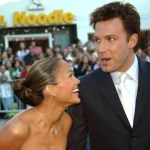 “They enjoyed Mediterranean food in one of the private dining rooms. Jen looked amazing,” a source shares with the outlet. “They were both in a great mood. Ben always looks very happy when he is with Jen.” The couple was even spotted laughing it up during their date night, and seemed super smitten — as if no time had passed at all! Clearly, Affleck and Lopez have definitely been making the most of their rekindled romance. But the detail that Lopez “spends as much time with Ben as possible,” definitely draws some new speculation as this new phase of their relationship unfolds.

Although Affleck and Lopez have a storied history that dates back to the early aughts — including a whirlwind romance, 2002 engagement, and split in early 2004 — it feels like the two are moving at hyper-speed. Reports have already suggested that Affleck is “planning a romantic proposal” for Lopez. The “On The Floor” singer, meanwhile, might be getting ready to make Los Angeles her new home base — which incidentally happens to be where Affleck resides.

But while these reports and fan speculation make the rounds, the new and improved Bennifer seem focused on two elements in their life: their relationship and their families. Affleck and Lopez have made a concerted effort to keep their priorities in line, while fans continue to ponder what’s next for the couple. Regardless of the any new steps in their relationships, we’re just so glad these two are picking up where they left off more than 17 years ago!

Before you go, click here to see celebrity couples who famously broke up and got back together.