The rift between Kate Middleton and Meghan Markle may have started earlier than anyone ever thought due to a fashion designer, who was highly in demand by both women. London designer Erdem Moralioglu was favored by both the Princess of Wales and the Duchess of Sussex, but royal ranking reportedly came into play.

Both women have made their mark with their unique fashion styles, so it’s no surprise that they would both love a label that dresses A-list stars like Nicole Kidman and Naomi Watts. Kate enjoyed elite access to the brand because she was a member of the royal family while Meghan wore Moralioglu’s creations during her time on Suits — both on set and in her personal life, according to The Telegraph.

Meghan learned early on that she would have to wait in line behind Kate to take a look at his latest line. “Erdem Moralioglu was one of Meghan’s absolute favorites, but even after Harry had put a ring on it, Kate, who was already a client, continued to get priority,” the U.K. outlet explained. It makes sense for Kate to get “first dibs on designers” because she will one day be the queen, but it didn’t make her relationship with Meghan any easier.

As Harry noted in his Spare press junket, women have it the hardest at the palace. They seemed to be protected the least by the royal family and often are the subject of unfair headlines while some of the men (cough, cough, Prince Andrew) seem to get off easy. The royal protocols, especially when it comes to wardrobe, can be challenging to adhere to, so, understandably, eliminating one favored designer when you’re new to the family must have been difficult. It’s almost as if the palace structure pitted Kate and Meghan against each other from the get-go instead of fostering a supportive sisterhood. 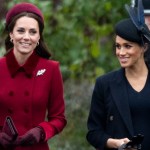