President Trump’s impeachment — his second, which is a presidential first — was big news on late night and everywhere else on Wednesday.

“I feel like I just took down my decorations from the last impeachment.” — STEPHEN COLBERT

“Twice! Man, this guy is hard to get rid of. He’s like a red wine stain on a white rug — we’re going to have to just get rid of the whole rug.” — SETH MEYERS

“And like always, the sequel was a lot worse than the original.” — JIMMY FALLON

“I know a lot of people are wondering, ‘Will I be able to follow the second impeachment if I missed the first?’ Yeah, same character, different plots.” — JIMMY FALLON

“That’s right, President Trump was impeached today for a second time — or, according to Fox News, ‘Fun rainy-day crafts to do with your grandkids.’” — SETH MEYERS

“I wonder if he’s tired of all the winning yet.” — JIMMY KIMMEL

“It’s almost like he’s tanking the season so he can get the number one pick in the jailhouse fantasy draft.” — SETH MEYERS

“Two impeachments, and just like Trump’s sons, the second one is the most embarrassing.” — JAMES CORDEN

“It’s official: Mitch McConnell has turned his back on Trump, which means someone should probably help him because usually when Mitch McConnell flips on his back, it’s hard for him to get back up on the right side again.” — JAMES CORDEN

“Well, it took them four years, but Trump finally figured out a way to unite Republicans and Democrats.” — JIMMY FALLON

“Yep, 10 Republicans finally broke away from the president. Trump was so mad he started typing angry tweets about them on a calculator.” — JIMMY FALLON

“McConnell is reported to be happy that the impeachment is happening, because he thinks it’ll be a good way for Republicans to get Trump out of their hairpieces.” — JIMMY KIMMEL

”Reportedly, McConnell has told associates in private that he believes the president committed impeachable offenses and is leaning toward convicting him. It will all be in his memoir, ‘Leaning Toward Courage.’” — STEPHEN COLBERT

“Now this all seems promising, I know, but watch out, because there is actually nothing more disturbing than the sight of a pleased Mitch McConnell.” — JAMES CORDEN

“McConnell’s apparent support for impeachment gives cover for others, meaning a dozen Republican senators — and possibly more — could ultimately vote to convict the president. Yes, at least a dozen, and possibly more, if there’s a sale at Bob’s Spine Barn.” — STEPHEN COLBERT

Something big happens in Washington whenever Samantha Bee is a guest on “The Late Show.” 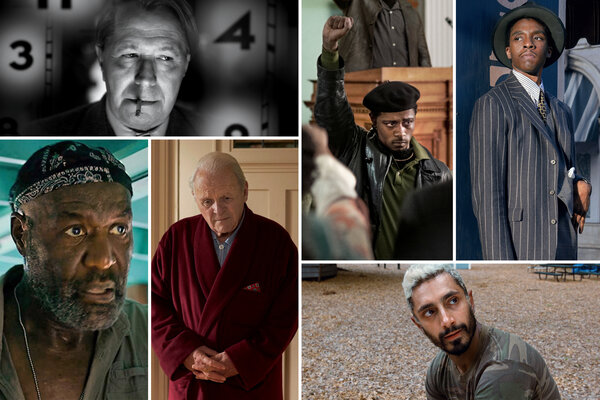 The late Chadwick Boseman’s performance in “Ma Rainey’s Black Bottom” looks like the favorite for Best Actor at this year’s Academy Awards.