Lincoln Center is known for the grandeur of its theaters and concert halls: the stately, majestic Metropolitan Opera House, which seats 3,800; David Geffen Hall, aglow as New York Philharmonic fans file in for an evening performance; the David H. Koch Theater, home to New York City Ballet and designed specifically with dance in mind.

But with those spaces closed to public performances for nearly a year because of the coronavirus pandemic, Lincoln Center is now looking beyond the walls of its travertine-clad buildings to another part of its 16-acre campus: the outdoor space.

Lincoln Center announced Thursday that it plans to create 10 outdoor performance and rehearsal spaces, becoming the latest entrant in the effort to move small-scale performances outside to try to bolster the performing arts in New York and get artists back to work after months of shutdowns.

The broad initiative, known as “Restart Stages,” will begin April 7 with a concert for health care workers. There are plans for a cabaret-style stage, a dedicated area for families that will feature arts activities for children, rehearsal venues that will be open to the public, an outdoor reading room created in partnership with the New York Library for the Performing Arts and an outdoor space for another kind of Lincoln Center ritual: public school graduations held each spring and summer.

Programming will include not only Lincoln Center organizations — which plan to put on screenings, concerts and dance workshops — but also arts institutions from across the city. Lincoln Center officials said that it would partner with groups including the Bronx Academy of Arts and Dance, the Caribbean Cultural Center African Diaspora Institute, Harlem Week and the Harlem Arts Alliance, the Korean Cultural Center New York and Weeksville Heritage Center, all of which will take turns programming the outdoor areas. 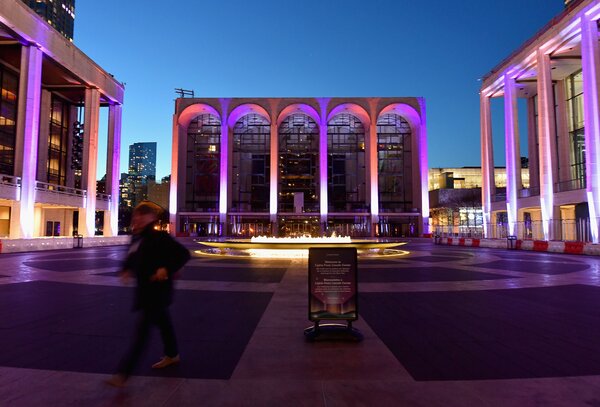 Some of the performances will be streamed live online, officials said, adding that more details will be rolled out soon.

Henry Timms, the president chief executive of the Lincoln Center, said in an interview that he and other organization leaders spent a lot of time thinking about how to leverage their “unique gift of outdoor space” and considering how they might use it to “create an on-ramp to indoor performance.”

“This is a real chance to renew our work as an institution — reimagine our work,” Mr. Timms said. “The opportunity for us now is actually for us to try to experiment,” he added, noting that he expected some of the ideas to become permanent fixtures in the years ahead.

Thursday’s announcement comes as New York has begun inching its way toward restoring a taste of the artistic and cultural events that have long infused the city with much of its energy and creativity, not to mention economic activity.

Last weekend, the musician Jon Batiste led a band through the Javits Center in the first of a series of “NY PopsUp” concerts that were announced by Gov. Andrew M. Cuomo and which are being put as part of a public-private partnership between state officials and the producers Scott Rudin and Jane Rosenthal. (Lincoln Center officials noted that their plans were developed in coordination with the concert series.) Mayor Bill de Blasio has called for a city Open Culture program, which will permit outdoor performances on designated city streets this spring.

It will be some time before indoor live performances return. Three of Lincoln Center’s biggest constituent organizations — the Met Opera, City Ballet and the Philharmonic — all hope to resume in the fall. The Philharmonic plans to reprise last year’s NY Phil Bandwagon concerts, a program that brought musicians throughout the city via pickup truck, in the spring.

But the pandemic is far from over. On Monday, the United States surpassed 500,000 known coronavirus-related deaths. In New York alone, the number has risen above 46,000 with more than 1.6 million cases. And a report released by the state comptroller on Wednesday said that as of December 2020, employment the in the arts, entertainment and recreation sector in New York City had declined by 66 percent compared with a year earlier — the largest decline of any sector of the city’s economy.

Aware of the city’s broader struggles, Lincoln Center said it would partner with the New York Blood Center and the Food Bank for New York City to offer services like blood drives and food distribution alongside its arts programming; the campus will also serve as a designated election polling place in the upcoming mayoral primary.

And in what has become a common refrain for any organization, Lincoln Center officials emphasized that they had designed their plans with input from public health experts.

Mr. Timms said that the pandemic had helped bring about “a much more intentional focus on our civic work alongside our cultural work.”

And he said that Lincoln Center would be nimble and adjust as rules change to allow more visitors.