The line outside the Metropolitan Museum of Art trailed out the door, down the rain-swept stairs, around the trees and past the fountain and the hot-dog stands on Fifth Avenue as visitors waited under dripping umbrellas. They were among more than 10,000 people who had the same idea for how to fill a rainy Sunday in New York City, turning the holiday weekend into the museum’s busiest since the start of the pandemic.

In Greenwich Village, jazz fans lined up to get into Smalls, a dimly lit basement club with a low-ceiling where they could bop their heads and tap their feet to live music. All five limited capacity screenings of Fellini’s “8 ½” sold out on Monday at the Film Forum on Houston Street, and when the Comedy Cellar sold out five shows, it added a sixth.

If the rainy, chilly Memorial Day weekend meant that barbecues and beach trips were called off, it revived another kind of New York rainy-day tradition: lining up to see art, hear music and catch films, in a way that felt liberating after more than a year of the pandemic. The rising number of vaccinated New Yorkers, coupled with the recent easing of many coronavirus restrictions, made for a dramatic and happy change from Memorial Day last year, when museums sat eerily empty, nightclubs were silenced, and faded, outdated posters slowly yellowed outside shuttered movie theaters. 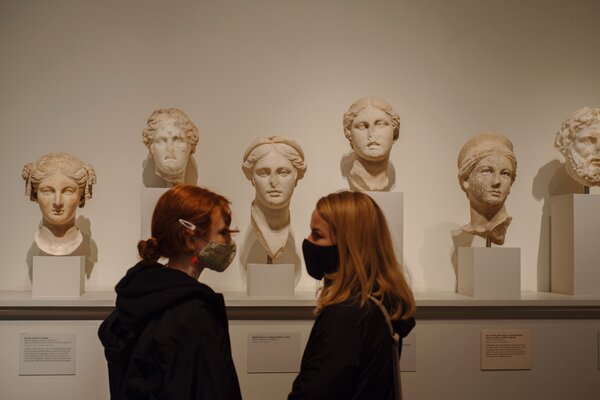 For Piper Barron, 18, the return to the movies felt surprisingly normal.

“It kind of just felt like the pandemic hadn’t happened,” she said.

Standing under the marquee of Cobble Hill Cinemas in Brooklyn, Barron and three friends who had recently graduated high school waited to see “Cruella,” the new Emma Stone movie about the “One Hundred and One Dalmatians” villain. Before the pandemic, the group was in the habit of seeing movies together on Fridays after school, but that tradition was put on hold during the pandemic.

In recent weeks, Governor Andrew M. Cuomo has relaxed many of the coronavirus restrictions that limit culture and entertainment, and Memorial Day weekend was one of the first opportunities for venues to try out the new rules, with a growing numbers of tourists and vaccinated New Yorkers looking forward to a summer of activity.

At the Met, Saturday and Sunday each drew more than 10,000 visitors, a record for the museum during the pandemic, and roughly double what it was logging two months ago, before the state loosened capacity restrictions, said Kenneth Weine, a spokesman for the museum.

Despite the near-constant rain, museum visitors and moviegoers agreed: this was much better than whatever they did over Memorial Day weekend last year. (“Nothing, just stayed home,” recalled Sharon Lebowitz, who visited the Met on Sunday with her brother.)

Of course, the pandemic is not yet over: an average of 383 cases per day are being reported in New York City, but that is a 47 percent decrease from the average two weeks ago. And there were physical reminders of the pandemic everywhere. At Cobble Hill Cinemas, there were temperature checks and a guarantee that each occupied seat would have four empty ones surrounding it. At the Met, a security staffer asked visitors waiting in line for the popular Alice Neel exhibition to stand further apart from each other.

And, everywhere, there were masks, even though Mr. Cuomo lifted the indoor mask mandate for vaccinated individuals in most circumstances earlier this month. Most museums in the city are maintaining mask rules for now, recognizing that not all visitors would be comfortable being surrounded by a sea of naked faces.

“It’s certainly not all back to normal,” said Steven Ostrow, 70, who was examining Cypriot antiquities at the Met.

“If it was, we wouldn’t be looking like Bazooka Joe,” he added, referring to a bubble gum-wrapper comic strip, which has a character whose turtleneck is pulled high up over his mouth, mask-like.

And at the Museum of Modern Art, the gift shop was offering masks on sale for up to 35 percent off, perhaps a sign that the precaution could be on the way out.

Although the state lifted explicit capacity limits for museums and other cultural venues, it still requires six feet of separation indoors, which means that many museums have set their own limits on how many tickets can be sold each hour. And some have retained the capacity limits of previous months, including the Museum of Jewish Heritage, which has capped visitors at 50 percent, and El Museo del Barrio, which remains at 33 percent.

Venues that only allow vaccinated guests can dispense with social distancing requirements, which is proving a tempting option for venue owners eager to pack their small spaces. And there seems to be no shortage of vaccinated audience members: On Monday, the Comedy Cellar, which is selling tickets to vaccinated people and those with a negative coronavirus test taken within 24 hours, had to add an extra show because there was such high demand.

No one was more pleased to see lines of visitors than the venue owners, who spent the past year eating through their savings, laying off staff and waiting anxiously for federal pandemic relief.

During the lockdown, Andrew Elgart, whose family owns Cobble Hill Cinemas, said he would sometimes watch movies alone in the theater with only his terrier for company (no popcorn, though — it was too much work to reboot the machine). Reopening to the public was nothing short of therapeutic, he said, especially because most people seemed grateful to simply be there.

“These are the most polite and patient customers we’ve had in a long time,” he said.

Reopening has been slower for music venues, which tend to book talent months in advance, and who say the economics of reopening with social distancing restrictions is impractical.

Those capacity limits and social distancing requirements have kept most jazz clubs in the city closed for now, but Smalls, in the Village, is an exception. In fact, the club was so eager to reopen at any capacity level that it tried to briefly in February, positioning itself primarily as a bar and restaurant with incidental music, said the club’s owner, Spike Wilner. That decision resulted in a steep fine and ongoing red tape, he said.

Still, for Wilner, there was no comparison between this year and last, when he was “in hiding” in a rented home in Pennsylvania with his wife and young daughter.

“It feels like some kind of Tolstoy novel: there’s the crash and the redemption and then the renewal,” he said as he shepherded audience members into the jazz club. “Honestly, I feel positive for the first time. I’m just relieved to be working and making some money.”