The Pritzker Prize-winning French architect Jean Nouvel says all his fondest childhood memories revolve around the water. They include his family’s annual summer vacations to the Côte d’Azur, where he spent his days swimming in the sea, and his kayaking excursions down the Dordogne River, near Sarlat, the city in southwest France where he grew up.

Today, more than 60 years later, water is an integral element in many of Mr. Nouvel’s designs. Among them are Monad Terrace, a 59-residence bay-front condominium project in Miami Beach that features a honeycomb glass facade, a series of reflecting pools and a lagoon; and the Louvre Abu Dhabi, a dome-shaped building that looks like an island in the middle of the water. Much of his work — such as the Culture and Convention Center in Lucerne, Switzerland, and La Marseillaise, a skyscraper in the French port city of Marseille — is in waterfront locations. 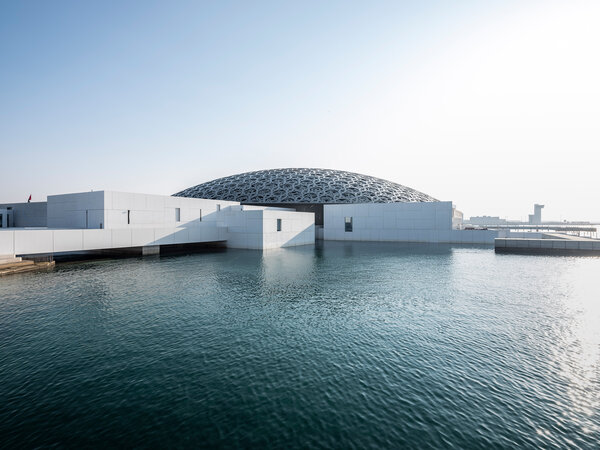 Born in Fumel, in southwest France, Mr. Nouvel, 75, studied his craft at the Fine Arts School of Bordeaux and the National School of Fine Arts in Paris. His Paris-based design firm, Ateliers Jean Nouvel, has close to 150 employees. The company has won numerous awards for architecture and design and worked on upward of 100 projects, ranging from museums, concert halls and theaters to residential and office buildings, as well as private homes.

Mr. Nouvel divides his time between Paris and St.-Paul de Vence, a medieval hilltop village in the south of France that offers views of the Mediterranean Sea and attracts tourists to its picturesque setting and art galleries.

Speaking through an interpreter, he recently discussed his architecture. These are edited excerpts from the conversation.

Why is water so prominent in your works? What is it about water that attracts you?

To me, architecture is an art — it’s not about building buildings. My goal is to create emotions through my art, and I believe that water has the magic characteristic of creating so many emotions and dreams. My childhood, where I spent so much happy time around the water, is also a big factor in why I’m drawn to it and want it to play a role in my professional life.

The emotions water creates are different, depending on the body of water — it could be a sea, river or port.

They’re all so different, depending on the destination, which also factors into my designs. When I’m in the Côte d’Azur, for example, the mountains frame the rocky sea, and I feel complete freedom.

The Dordogne, in contrast, is completely blanketed in green. Being here is about following the slow stream under the branches of the trees. It’s like poetry.

Given that the destination plays into your designs, can you share how Miami Beach influenced your vision for Monad Terrace?

Miami Beach is all about the beach.

Over the years, I have been to Miami many times for [the art fair] Art Basel and other occasions, and spent time at the beach, but Monad Terrace is on the bay. As a result, my project was in response to a perspective of Miami that’s not typical. I used reflecting pools and a lagoon to create the sensation that the building is totally immersed in the water. If you’re standing inside your apartment, you can look down at the water and see its variations with the light and moving of the trees, and feel like they’re coming into your home and are a part of it.

This experience of immersion is central to many of my designs, including Jane’s Carousel in Dumbo, in Brooklyn, which is next to the East River and has a clear facade. When the carousel moves, the light from the outside reflects against the facades and gives the feeling that the horses are dancing on the water.

The National Museum of Qatar, a building consisting of curved discs set at different angles, is one of your prominent designs in recent years. Tell us about your use of water in the project.

This design is an encounter between the desert and the sea, which Qatar, as a destination, very much is.

I was inspired by the desert rose, a flower that blooms in the desert there and is a symbol of the country. The building is my version of the rose, and the different curves are meant to resemble blades. It has a long reflecting pool in front of it and is near the Persian Gulf.

You get a clear view of the museum from the water, and when you’re inside, looking out at both the pool and the sea, you get the sensation of floating above the water.

The Louvre Abu Dhabi, another of your major museum projects, is in a destination that’s similar to Qatar in terms of having both desert and sea. How is this design different from your work in Qatar?

Here, I created my version of a cupola, which is characteristic of Arabic architecture. The building looks like an island floating in the middle of the sea and is a big dome with a perforated roof, where the sun filters through.

Looking at it, it’s hard to tell that you can get there by land. It’s almost a metaphysical structure.

What are some of your coming projects where water is a central theme?

The Opera of Shenzhen, in Shenzhen, China, which is in front of Hong Kong and the estuary of the Pearl River. The design is meant to be an encounter of the music and the sea and evoke a musical composition with its silhouette of waves arriving on the coast.

If you had to pick a favorite waterfront destination, what would it be?

I love anyplace where I can swim in the sea and still go to the Côte d’Azur. St.-Paul de Vence, where I live, is also dear to me because I can see the Mediterranean from my home. And I frequently visit Cadaques, a beautiful town in Spain’s Costa Brava. Being there reminds me of my youth.