Lori Harvey is stepping into a new phase with one thing in mind: self-love. Talking to Essence as their new cover star, Harvey, who is daughter to TV host Steve Harvey and Marjorie Elaine Harvey, opened up about the new moment in her life all while looking stunning for the magazine’s “Black Love” issue.

On the cover, Harvey looks angelic wearing nothing but a gold snake necklace and placing her hands on a mirror of her own reflection. As for glam, Harvey’s seen rocking a glowy look with glossy lips and pulled-back hair.

Inside the shoot, another photo of the SKN by LH founder shows off her mile-long legs as she sits down in a chair wearing white panties, a white feather vest, and black pumps. In another picture in the shoot, Harvey shows off her innocent side looking over to the camera as she poses wearing polka-dot black tights, a matching polka-dot one-piece, and a chic black bob. In the last pic, Harvey shows off just how powerful she can be wearing a black strapless gown as she’s served some bubbly. Talk about variety!

In the conversation with the outlet, Harvey talked about making a name for herself, something she feels she wasn’t allowed to do before. “I feel like it’s always been about me attached to something or someone,” she told the outlet, possibly referencing her recent split from longtime boyfriend Michael B. Jordan. “This time, it’s about me. Self-love, self-care, self-reflection. I’m being a little selfish right now. It’s my time.” As it should be, Lori!

Also in the interview, the model, who signed to IMG models and WME last year, talked about her skincare brand, SKN by LH, which she debuted in 2021.

“That has arguably been one of the hardest things I’ve ever done in my life, but also one of the most rewarding and fulfilling because this is the first thing that I’ve really been able to call my own thing that that I built from the ground up,” she said of starting the company. 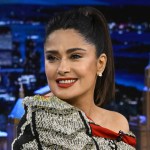 Harvey also acknowledged her family’s connections in the business, something she tried to steer away from. “It would’ve been very easy for me to just ask my parents to connect me with people and set it up, and I’ll just slap my name on it and go about my day,” she said. “But I really wanted to learn the ins and outs of the business. I wanted to be very hands-on with everything I was doing, and I wanted to make the mistakes, so that I could learn from them and really know how to be a businesswoman at the end of the day.”

Looks like Harvey’s entered a new phase and embraced her new passion and we love that for her!

Before you go, click here to see the net worth of 15 mega-rich celebrity kids.