“I think I am always surrounded by ghosts,” said Taja Cheek, the songwriter who records as L’Rain. “I like to be haunted. I’ve been revisiting the past to try to understand where I am now.”

Yet in a video interview from her home in Brooklyn, L’Rain was cheerfully down-to-earth. Behind her was a bright-colored tapestry she had picked up long ago in a department store. “I like bringing weird ideas to mainstream places,” she said. “That’s what I look for in culture.”

Cheek, who’s in her 30s, chose her stage name to honor her mother, Lorraine, who died while Cheek was recording her 2017 debut album; the album cover shows its title, “L’Rain,” tattooed on her forearm. On her second album, “Fatigue,” which arrives this week, Cheek continues to ponder self-doubt, remembrance, bewilderment, regret, mourning and anxiety while trying, somehow, to persevere. In “Find It,” she sings, “My mother told me, Make a way out of no way.”

That line, intoned like a mantra in a low, quiet voice, is at the core of the album. Her mother, she recalled, “had an amazing sense of play, and I hope that I can approach experimentalism in my music through that lens of just playing and trying things out. She was always true to how she was feeling, but she was also really good at trying to find joy or find a bright side.”

L’Rain’s music doesn’t simplify things. It’s constantly melting down and metamorphosing, deliberately evading genres, in a way she has described as “approaching songness.” Melody lines ripple into cascades of overlapping voices; rhythms emerge only to shift away from where the downbeat had seemed to be. Harmonies meander through chromatic ambiguities; low-fi moments dovetail into studio opulence, as loops and echoes enfold her voice like electronic ghosts.

No structure stays solid or predictable. “Fatigue” opens with noise blasts, drum salvos, sirens, jolting silences and a frenetic guest monologue by Quinton Brock in “Fly, Die,” while “Find It” veers into a gospel song that Cheek recorded on her phone at a funeral, then overdubbed with vocals and saxophone like layers of veiled recollection. “Suck Teeth,” the album’s closest approach to the verse-chorus-bridge of a typical pop song, skips beats and drifts through shifting clouds of distortion, as Cheek wonders whether she’s fit for motherhood.

“I like the idea of listening to something and getting to a new place and not really knowing how you got there, being transported. And I want people to feel like — even if they hate the record — it’s unlike any other things that they’ve heard. In my personal life, I’m trying to figure out the answers, but I feel like I leave the listener with an open question or a sense of openness. I want the music to be a vessel that can be filled.”

Although the songs defy formulas, the album also has an orderly overlay. Each of the 14 tracks has a two-word, two-syllable title, adding up to a 28-syllable poem. Full-length songs alternate with studio-tweaked, often lighthearted snippets of everyday life that Cheek had recorded — something she often does, she said, because she has a bad memory.

“Taja is just a total visionary; she doesn’t hear music like anyone else,” said Andrew Lappin, who produced both L’Rain albums. “Her compositional sensibility and the sonics are kind of married. And Taja is not just a musician with an incredible ear for harmony and rhythm and structure and all that stuff. She’s also an art documentarian. There’s a reason why there’s all those little field recordings and samples of things in there. She is very engaged in the world around her.” 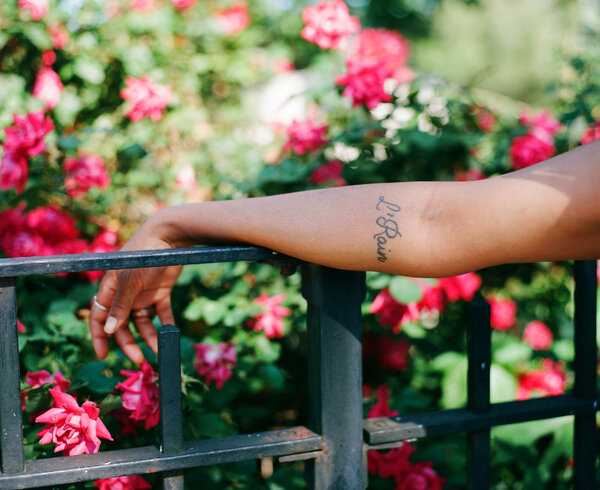 Cheek grew up in Crown Heights, in the house where her grandparents lived; her grandfather owned a jazz club, the Continental, around the corner. Her father worked in marketing and promotion for radio stations, including WBLS, and for the label Select Records, so she heard plenty of hip-hop and R&B and learned some guitar chords. But her parents also encouraged her to study classical music. She played piano and cello, and joined a Baroque recorder quartet in high school. “I hated practicing, but then I got really into it,” she said.

To play in bands, Cheek taught herself to play bass. She left the familiarity of Brooklyn to attend Yale University, where she majored in music. But she felt isolated from her fellow music majors and rarely performed with ensembles. Instead, she turned to the college radio station, where she became a music director; she also started organizing indie concerts. “I just missed New York and being able to see music all the time,” she recalled. “So had to create it a little bit in New Haven.”

A song on the new album, “I V” — as in Ivy League — grew out of what Cheek calls her “angsty” college years: “The pigs will chew me ’cause art won’t pay,” she sings.

“I was in school at the time,” she said, “and being a musician never occurred to me as being a viable job option, ever. I’m still coming to terms with that.”

Cheek has a full-time job presenting performances; she is an associate curator at MoMA PS1 in Queens, augmenting exhibitions with live shows and leading the committee that produces PS1’s consistently forward-looking summer music series, “Warm Up.” She has also backed up and collaborated with other musicians, lately with Vagabon and Helado Negro.

She was between bands in the mid-2010s when she started making her own music as L’Rain; Lappin gave her a decisive nudge: “My mom would always say, ‘You should just sing and play piano.’ And I just brushed her off. And then the bands I was in fell apart, and Andrew Lappin said, ‘Have you ever thought about making your own record?’ He was the catalyst. And my mom, also, with me eventually realizing, ‘OK, you were right.’”

Cheek had been warehousing dozens of musical ideas on a private SoundCloud page: “Anything from six seconds to two-and-a-half minutes,” Lappin recalled. As he helped her sift through them, they saw the potential for a coherent project, and “L’Rain” emerged as a moody, liquid, atmospheric album, with Cheek’s vocals often blurred amid the instruments.

For “Fatigue,” Lappin and Cheek decided to make her voice and lyrics clearer, and to allow more visceral, aggressive moments. “The first record was like a bunch of sounds all at once, and it’s hard to tell where one begins and one ends,” Cheek said. “This one is more defined. We were trying to be bolder with the sonic palette, and making more decisions.”

They recorded in New York and in Los Angeles, where Lappin worked at the venerable Sunset Sound studios. Some of L’Rain’s vocals were run through the same reverberation chamber — an isolated stonewalled room — that the Beach Boys used when recording “Pet Sounds” in 1966. L’Rain used live instruments, computer manipulation, assorted amplifiers and even a cassette player, along with Cheek’s field recordings; a deep drone she recorded on a subway ride was sampled and pitch-shifted to provide one song’s bass line.

Cheek’s musical reference points for the songs on “Fatigue” are far-reaching: the dusty loops of J Dilla, the propulsive virtuosity of Johannes Brahms piano exercises, the jazzy chord progressions of D’Angelo, the Minimalism of Philip Glass’s “Einstein on the Beach,” the weightless vocal blend of the Beach Boys, the power of a gospel crescendo, more of her SoundCloud sketches. And with songs like “Kill Self,” “Two Face” and “Blame Me,” L’Rain grapples with guilt, insecurity and persistence. “Take Two” remakes “Bat,” from the first L’Rain album, as an otherworldly, pitch-shifted hymn, ending the new album with Cheek singing, “I am not prepared/for what is going to happen to me.”

With her music, Cheek said, “I am trying to go inward and try to understand the parts of myself that I don’t like, to try to heal and be better.” She pointed out that “healing” has lately become a buzzword, “and it seems like a glossy, fancy, fun thing. In reality, it’s not. It’s a lot of hard work and introspection. I feel like I had to go through this period of just, ‘What are my demons? What is the darkness, so I can get through to the other side?’ Life can be hard. It’s not all rosy. And that’s OK.”