If you want to trace the roots of American popular music, you have to start when Europeans brought enslaved Africans across the Middle Passage. After Emancipation, the sounds of Africa and field hollers and work hymns from the American South dispersed across the country and transformed into new forms: the blues in Mississippi, jazz in New Orleans and later hip-hop in the Bronx.

Historians, anthologies and exhibitions have traced this path before, but an entire museum hasn’t been devoted to demonstrating and celebrating how Black artists fundamentally shaped American music until now. Last Saturday, the National Museum of African American Music opened in Nashville, with six interactive sections covering 50 genres of music with a focus on gospel, blues, jazz, R&B and hip-hop.

The idea for the museum, which has been 22 years and $60 million in the making, originated with Francis Guess, a civil rights advocate and Nashville business leader, who shared it with T.B. Boyd III, then the president and chief executive of the R.H. Boyd Publishing Co. In the beginning, they gathered with local leaders for monthly meetings in their living rooms to raise enthusiasm and seed money.

The Nashville Area Chamber of Commerce conducted a feasibility study for a museum encompassing African-American culture in 2002; and in 2011, its focus was narrowed to music. With the support of the city and many community members, 56,000 square feet of the Fifth & Broadway complex in downtown Nashville were carved out for the institution. (The museum is open on Saturdays and Sundays in February, and time-slotted tickets are required for a limited number of masked visitors.)

Steven Lewis, one of the museum’s curators, said that the galleries aim to show the living tradition of Black music. The more than 1,500 artifacts illustrate the experiences of everyday people, not just the famous ones. (Though the collection does feature items from Ella Fitzgerald, Duke Ellington, George Clinton, Whitney Houston and TLC.) They also show the music’s global reach.

“Look at the young white British musicians from the 1960s, like the Beatles,” Lewis said in an interview. “They were listening to Muddy Waters and Son House. They found something in that music that drew them. Look at Louis Armstrong’s tours in West Africa — there was something that connected them. The African-American experience as expressed in the music is a compelling distillation of experiences of oppression, struggle and triumph that people around the world can relate to in different ways.” 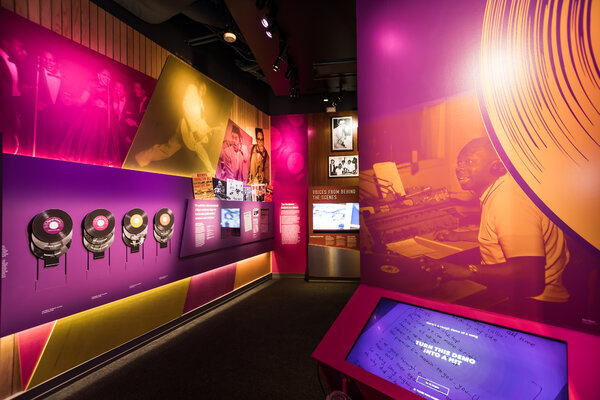 Lewis, a jazz saxophonist and ethnomusicologist, specifically looked at the impact of the Great Migration on the spread of Black music around the world. During this period between 1916 and 1970, more than six million African-Americans left agricultural work in the South for manufacturing jobs in the North and West. With the industrialization of America also came the industrialization of music — in the blues, artists like Muddy Waters went from playing acoustic guitar to the electric.

In the section of the museum devoted to this moment, called “Crossroads,” artifacts on display include a lantern from the Illinois Central Railroad, a guitar and handwritten lyrics from B.B. King, a suit and shoes from Bobby “Blue” Bland, and a 78 from Black Swan Records, the first major blues and jazz record label owned by African-Americans.

“Crossroads” also strives to tie the genre to the present by collaborating with living musicians like the blues guitarist Kevin Moore a.k.a. Keb’ Mo’, a Nashville local who has been involved with the museum since its conception.

“Nashville needs this museum, because it’s a musical mecca,” said Moore, who is a national chair for the museum. “The average person just thinks of country music,” he added, noting that the city’s nickname Music City is said to have come from the Black vocal group the Fisk Jubilee Singers impressing Queen Victoria with a performance.

One of Moore’s first red Silvertone electric guitars, an instrument that survived the 2010 Nashville flood and Moore sees as a testament to the city’s resilience, is also on display. “Some of the paint came off, and it’s a little damaged, but it’s still playable,” he said. “It’s significant to me because the Silvertone guitar from Sears is a part of my musical history. I got that one when I was 17 and it’s one of the nearest and dearest to me.”

In developing “Crossroads” and the other galleries, curators made a point of spotlighting women’s contributions. “Women are the ones that started this genre,” the vocalist Shemekia Copeland said, adding that she fell in love with the blues as a child because of the way the lyrics tap into the power and struggles of Black people. “In the 1920s, it was all about female entertaining and the musicians were in the background. That changed later on when it became more guitar-driven.”

Copeland believes that a museum devoted to African-Americans’ vast impact on music is critical. “The music is the people,” she said. “It’s how we’ve always expressed ourselves. If the world ended and somebody found records and they listened, it would tell the story of what happened to us culturally.”