Netflix is going in hard on the families involved in the college admissions scandal with their new documentary, Operation Varsity Blues: The College Admissions. We know all about headliners like Lori Loughlin and Felicity Huffman, but dozens of other less famous, but just as privileged parents, participated in mastermind Rick Singer’s “side-door” scheme for getting their kids into college. 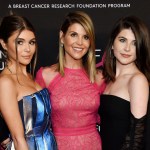 
Lori Loughlin's New $9.5 Million Hidden Hills Home Has a Private Hillside & Closets You Could Sleep In

The film uses real conversations recreated from FBI wiretaps and gives viewers true insight into how much the parents knew about the illegal strategy — and the trailer is teasing us with how infuriating and unfair the whole situation is. One voice is heard in the clip saying, “Is there any risk that this thing blows up in my face?” Uh, yeah, and you knew it might, but you took the chance anyway.

Singer breaks down how his whole operation worked, “We help the wealthiest families in the U.S. get their kids into school,” says actor Matthew Modine, who portrays Singer in the reenactment scenes while images of Loughlin, husband Mossimo Gianulli, and Huffman flash on-screen. “So I’ve done 761, what I call ‘side doors.’ The front door means getting in on your own, so I’ve created this side door in because my families want a guarantee.“

It’s pretty clear that parents had some understanding that this wasn’t the ethical way to get their children into top schools like Georgia Tech, the University of Southern California and the University of California, Los Angeles. Some of these counter the testimony of Loughlin and Gianulli, who claimed innocence for a year against the charges of bribery until finally pleading guilty last August.

The documentary is going to reignite the college admissions conversation about white privilege all over again — and it should. “It truly is amazing what people will say on the phone when they don’t know the feds are listening,” another person in the trailer says. Quotes like that continually smack you over the head in a two-and-a-half-minute video. While parents were worried about being caught, they were fine with their teens being portrayed as something that they weren’t — a short basketball player, a cheerleader suddenly becomes lacrosse expert and yes, we all remember Olivia Jade and Isabella Rose Gianulli’s  rowing talents.

The documentary premieres on March 17 and it’s sure to remind of the one thing that still stings with this scandal.

“They had every advantage, and yet they still cheated,” sums up an interview subject on the scandal. It almost makes us want to hear Huffman and Loughlin’s side of the story. What were they thinking?

Before you go, click here to see the most important celebrity lawsuits over the past 15 years.