BALTIMORE — A reporter once asked the soul singer Donny Hathaway, “What would you be if you were not a musician?” His answer: “Dead.” So ends Ebony magazine’s posthumous April 1979 profile of Hathaway, appearing just two months after he was found lifeless on the sidewalk outside a Manhattan hotel where he was staying.

As a result of his tragic end, fans and friends, especially those unaware of his diagnosis as a paranoid schizophrenic, publicly speculated whether his death was an accident, even though it was ruled a suicide.

No such tension exist in “Twisted Melodies,” the one-man show about Hathaway that begins a five-day run at the Apollo Theater on May 30.

Set in the Essex House hotel room on that fateful night, the play — written by and starring Kelvin Roston Jr. — explores the stirring sounds of Hathaway’s voice and his struggle with his mental health.

The play captures these contradictions by weaving Hathaway’s songs in and out of his deterioration, and through thoughtful set design which allows the audience to see the room, and thus the world, through Hathaway’s troubled eyes.

Mr. Roston originally conceived of a show that would feature Ray Charles, Stevie Wonder and Hathaway. He was working as an intern at The Black Rep, a professional African-American theater company in St. Louis, and quickly realized that he had to whittle it down to a single character.

“There’s no way I would be able to adequately cover all three of them,” Mr. Roston said. “Once I started doing the research, it actually was the mental illness of Donny Hathaway that pulled me in his direction.” 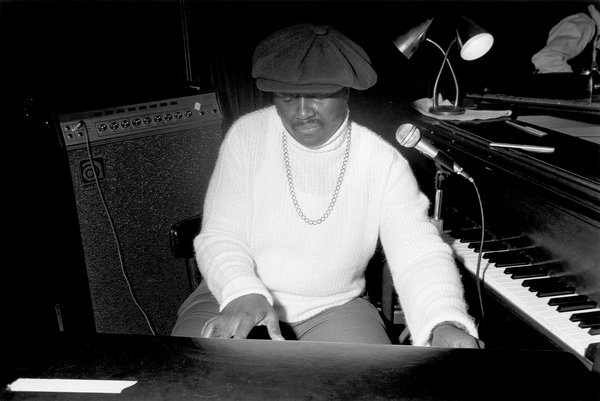 Hathaway was a prodigy, showing signs of preternatural musicianship as early as 3 years old. Raised in a religious St. Louis household by his grandmother, he honed his voice and piano skills in their church’s choir. He studied classical music at Howard University, where he formed a jazz trio with the drummer Ric Powell and met the singer Roberta Flack, a future collaborator and lifetime friend.

He left Howard early and quickly landed work as a producer and arranger for the likes of Aretha Franklin and the Staple Singers. A year after signing with Atlantic, Rolling Stone magazine dubbed him “a major new force in soul music.” His hits included “This Christmas,” “Someday We’ll All Be Free” and “A Song for You.” His duet with Ms. Flack, “Where is the Love?,” won them a Grammy Award in 1973.

The breadth of Hathaway’s musical interests made adapting his story no easy feat. First produced in 2015 at Chicago’s Congo Square Theater, where Mr. Roston was an artistic associate, the play moved to Baltimore Center Stage in 2015, and was revived there in early May. The Apollo run is a coproduction among the three theaters in association with Washington’s Mosaic Theater Company, where it will run from June 19 through July 21.

Derrick Sanders, the founding artistic director of Congo Square, came on board to direct during its first Baltimore run.

“My initial approach to the piece was that Hathaway was an American ‘Amadeus’ story,” he said, referring to Peter Shaffer’s award-winning play about Mozart. “Like Amadeus, he was a musical genius, but he was a tortured and lost soul.”

Yet while it was important to tell a story about mental illness in the black community, Mr. Sanders said that the show needed to be entertaining as well. “One thing I know is that people don’t want to sit here and listen unless you can do Donny’s music,” he explained.

Fortunately, Mr. Roston who was also musically trained in the Baptist church, is such a gifted singer that he is able to channel the Hathaway’s artistry without distracting from the momentum of the story or the integrity of Hathaway’s own musical legacy.

To date, Hathaway has been the subject of two poetry collections, a quasi-biography and a documentary, and this month he was honored with a Grammy Lifetime Achievement Award, to coincide with the 40th anniversary of his death.

His appeal appears to stem from the timelessness of his songs and the timeliness of his persona.

“Hathaway was not flashy like Sly Stone nor sexy like Marvin Gaye or some of the other soul men of that moment,” said Emily J. Lordi, the author of “Donny Hathaway Live.” “But what I think makes him so enduring is that he performed black masculinity in a really different way. He wasn’t the kind of classic macho soul man.”

Hathaway, Ms. Lordi said, deserves to be contextualized in the era of the Black Power movement. “There is a greater interest in telling the untold stories of soul by recuperating and illuminating some of those previously marginalized artists that haven’t neatly fit into the narrow frameworks that we’ve had for that political and artistic moment,” she explained.

Diagnosed at his professional peak in the early 1970s, Hathaway spent that decade in and out of hospitals, eventually separating from his wife, Eulaulah Hathaway, and their two daughters and going five years without recording a song.

When he did perform, band members, not to mention critics, often found him erratic. Yet in 1979, he was on his way to comeback. That year, Ms. Flack released their chart-topping duet “The Closer I Get to You,” and they spent many hours together in the recording studio on the day that he died.

“Twisted Melodies” considers Hathaway’s ability to push beyond the sonic boundaries of “time and space,” to quote one of his most famous songs. But it also seeks to deconstruct popular conceptions about madness and music — the myth that suffering is only the path to great art.

Rather than romanticize Hathaway’s fate, the play demands that we see him as both marvelous and morally complicated, a man who had to fight himself in order to be heard.

“Knowing that he was mentally ill means that we don’t get angry at people when their performances are not up to their usual standards because of some crisis they may be going through,” said Guthrie Ramsey, a music professor at the University of Pennsylvania who has written about the jazz pianist Bud Powell’s schizophrenia.

“Conversely, we shouldn’t think that it’s because of their mental illness they have some great artistic power,” Mr. Ramsey added. “We should simply put it into context, like we do other aspects of their upbringing, rather than making it some mysterious gift that they seem to be bestowed.”