Art styles don’t die; they barely go away. They can be exhausted by uninspired overuse, go out of fashion or be judged hopelessly reactionary. After that they mostly lie dormant until artists come along and make them new again.

For example, the Ukrainian-born, Israel-based artist Zoya Cherkassky has developed an unlikely hybrid of Social Realism and early Modernist figuration, spiked with cartooning, manga comics and children’s book illustrations. It can be seen in “Soviet Childhood,” her knockout American debut exhibition at Fort Gansevoort, a quirky downtown gallery.

The show presents recent works from the artist, who was born in Kiev, the capital of Ukraine, in the U.S.S.R., in 1976, started studying art at the age of 10 and emigrated to Israel with her family at age 14, in 1991, when the collapse of Communist rule was months away. In 2010, while pregnant with her own daughter, she began to paint and draw her memories of growing up in the Soviet Union.

Her wise, appealing works are alive with color, detail and, often, humor. But they are also psychologically subtle and socially astute. One of the best, most touching paintings here is “Maverick,” which shows a family in its small postwar apartment. A teenager of the punk persuasion gets dressed on one side of a strung-up blanket that barely serves as his bedroom wall. On the other, his mother watches anxiously while his father reads a newspaper. Intergenerational tensions are relieved by the artist’s robust palette, scale and brushwork. 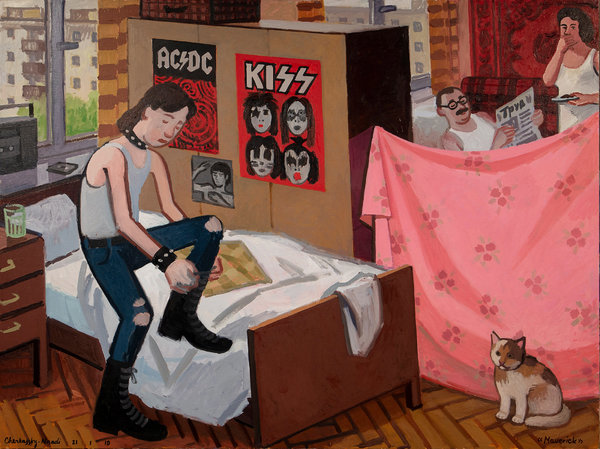 Ms. Cherkassy’s efforts acknowledge different Soviet realities. In “Marlboro” she depicts a tall, thin streetwalker in a park, detailing her denim outfit with Swarovski crystals; in “Yellow Flowers,” she adds an accent of earring and brooch to the more stylishly dressed woman. The regal biracial teen in “A Child of the Olympics” is one of many children born of relationships between Russians and non-Russians who met during the 1980 Summer Olympics in Moscow.

Despite recurring elements like striped drapes, red, rug-like wall-hangings and interior design, the domestic scenes do not center on one or even a few apartments, but reflect the sameness of Soviet urban life. Big apartment blocks figure in several works, like “Mama,” where a young girl clambers up to the window sill of a room warm with oranges and browns and sees her mother trudging through the snow. Large buildings painted dark luminous blue with windows of glowing pink belie their anonymity with sheer painterly beauty.

Ms. Cherkassky’s images tell as nearly as she can the truth of a bygone era. Her small but fervent, and mostly Russian-speaking Instagram following complains about inaccuracies, since many people had the identical car, refrigerator or transistor radio, like the one to which her father, seated and smoking, at the kitchen table, listens in “The Voice of America.” The red polka-dot coffee cup beside him is true to the period, not a decorative touch. So is the orange polka-dot saucepan that a babushka-wearing grandmother stirs in “Nunchaku,” while she gazes tenderly upon her bare-chested, self-absorbed grandson practicing with a pair of nunchucks, the martial arts weapon, in the mirror. Notwithstanding the simplicity of Ms. Cherkassky’s figures, their body language and facial expressions register complex emotions and life stories.

Expect to see more of Ms. Cherkassky’s effective fusions of the personal, the political and the painterly. She also paints her life today in Israel, and in Nigeria, her husband’s homeland, where she spends several months each year. This show is merely the tip of a very engaging iceberg. 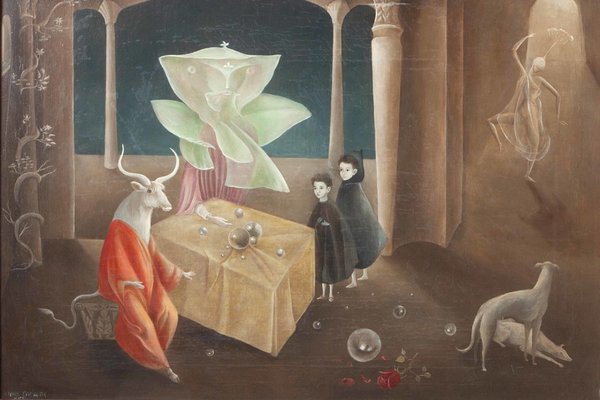