Prince Harry and Meghan Markle’s long-awaited Netflix series is reportedly premiering in December, but there might be a few issues over the stories presented. That’s because insiders are struggling to make sure that the comments made in the show also align with the Duke of Sussex’s upcoming memoir.

While the book isn’t expected to be published until 2023, a Page Six source is sharing that “a lot in the show contradicted what Harry has written, so that was an issue.” That’s possibly why “Harry and Meghan made significant requests [to filmmakers] to walk back content” even though they provided that specific material for their series.

It’s tough when those last-minute requests are made because the streaming network has major deadlines to meet so the show premieres on time. “Netflix needs a couple of months to do all of the formatting and dubbing, subtitling and audio — all of that stuff that enables it to launch on the platform,” a second insider added. With the death of Queen Elizabeth II on Sept. 8, it created challenges for both the filmmakers and the Sussexes since they were tied up with royal events during the official mourning period.

There’s also the family feud to consider now that there are rumors that Kate Middleton is hoping to play peacemaker during their US visit. It would be awkward to finally mend those fragile relationships, only to have a docuseries or memoir fan the flames all over again. It shows how much the royal family is in flux as they navigate life, with a new leader on the throne and a modern vision for the monarchy, now that the Queen has passed away.

Before you go, click here to find out which tell-all books expose major royal family secrets. 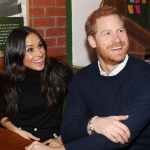 
King Charles Has a Sweet, Surprising Tribute to Prince Harry & Meghan Markle in His Office