The Singapore Grip was the last novel JG Farrell ever completed – he drowned aged 44 on a remote part of the Irish coast in 1979, in circumstances never wholly explained. ITV’s upcoming six-part dramatisation of his book is now reigniting interest in in the author’s life, and how he died.

It’s 21 years since Lavinia Greacen published her biography of JG Farrell. She’s delighted that the new TV version of his World War Two story The Singapore Grip is introducing him to new readers.

“Jim had a memorable and unique way of blending history and comedy with a characteristic melancholy,” she says. “People fall in love with how he writes which is why the historical novels have stayed in print.

“There were three earlier books, which probably aren’t now much read. But in 1970 he published Troubles, which takes place in 1920s Ireland after independence. 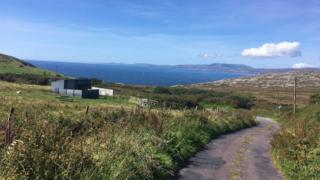 “I suppose it’s still his best-loved work and suddenly Jim had found his theme – the collapse of British imperial power around the world. With The Siege of Krishnapur (1973) it was India – and then came Singapore in World War Two.”

Farrell made headlines when The Siege of Krishnapur took the fifth Booker Prize. His acceptance speech at the Café Royal in London attacked capitalism and laid fiercely into the Booker Group – whose award scheme it was – and the way it treated workers in the Third World.

There has been criticism that Christopher Hampton’s new TV scripts have too few roles for Asian actors.

Greacen says JG Farrell worked to include Asian characters in his novel having been criticised for focusing too much on the British in The Siege of Krishnapur.

Farrell had polio in 1956 as a student at Oxford. Lavinia Greacen suggests the experience contributed to his sense that life is precarious and frequently unjust.

In 1979, financially stable at last, Farrell bought a house on the remote Sheep’s Head peninsula in West Cork in Ireland. The move took advantage of generous exemptions the Irish tax system gave to writers and artists. But also Farrell, born in Liverpool, had an Irish mother and felt a deep connection to Ireland.

Lavinia Greacen thinks in West Cork he was seeking solitude and room to write in peace.

‘Women found him attractive and he had three relationships on the go in London. But I’m sure he had no intention of marrying – even had he lived I doubt he would ever have had a wife.

“He’d lived a few minutes from Harrods and the museums and people were always popping into his small flat. So moving to what most London friends thought the middle of nowhere in southwest Ireland actually for him was perfect.”

The house was a short walk from rocks which on a clear day give a magnificent view over Bantry Bay and to the wide Atlantic beyond. Farrell was to become a keen angler fishing for mackerel and wrasse.

‘A very nice gentleman he was. But when he arrived he said he couldn’t catch any fish and I said where are you fishing off? He said down off the little slipway into the water and I said you’d have as good a chance in the kitchen sink.

“So I said I’d take him over to the other side of the slipway. That day I think we caught three fish and he loved it: he said there was nothing more enjoyable than to catch a fish and go back and cook it for himself.”

On the afternoon of 11 August 1979, Farrell took a break from writing at home. His new novel was again set in India and was returning to the old themes of wealth and class and prejudice.

The weather beyond his windows had been rough. But he set off anyway to fish from his usual spot down the lane.

Pauline Foley was the last person to see him alive. Now based near London, in 1979 she was living on the peninsula and by chance was out for a family walk near the rocks with her children aged five and 11 and a friend of theirs.

‘We could see him in the water’

Speaking to the BBC three years ago, she recalled she’d known of Farrell as a writer but that they had never met.

“JG wasn’t up very high.’ she said. “We could see that he’d got boots on and I was always telling them you mustn’t go near the sea with boots – it’s dangerous. I turned round to Sarah (her daughter) and she said quick Mummy he’s fallen in the water. And so I said I will go down and that put them into hysterics.

“We could see him in the water – just his head. I said I’m going to go down to reach to him but the children said no you’ll fall in. We called to him to take off the boots. But he didn’t even attempt to take the boots off He was quite close to me, only within about eight feet.

“He looked up at the boys and then round at me. I called to him to try and come towards me – because he was staying dead still. He wasn’t moving his arms but his head was completely above the water.”

‘He just went under’

No one can be sure – Pauline Foley didn’t see the moment he fell — but there has been speculation that wind and the Atlantic tides were unusually strong that day and these may have dragged Farrell from the rocks.

Later Jim Farrell’s body was found on the far side of Bantry Bay near the little port of Castletownbere. At the time people speculated the death was the work of anyone from the IRA to British Intelligence. But the coroner’s verdict was accidental drowning.

“In 2010, Troubles took the Lost Man Booker – which was retrospective because there’d been a rule change which meant in 1970 some books were missed out. So Jim became that rare thing – a double Booker winner.

“But above all he was a superb writer who told good stories: there’s a humour and humanity to his books. Had Jim Farrell lived he’d now be 85. It would be so wonderful to know where his talent as a writer might have taken him.”