There is a back-to-school feeling at the Resonant Bodies Festival, the immersion in new vocal music that arrives each year just after Labor Day. This week, singers, composers and musicians thronged the lobby and aisles of Roulette, in Brooklyn, chatting about where they performed over the summer and what’s coming up this fall.

The event has earnest, easygoing charm: Concerts inevitably start late; the intermissions go on forever; Lucy Dhegrae, the founder and director, gives casually unscripted speeches; this year, a duo skittered around the theater during pauses, breaking into impromptu close harmonies. Even the performances, however skilled, give the sense of works in process, of explorations shared in a spirit of generosity and intimacy. 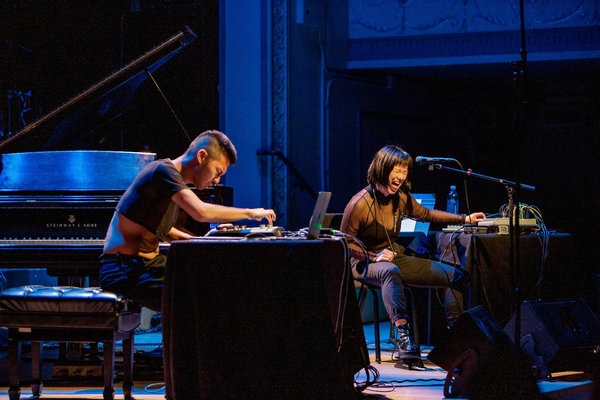 The formula is simple: three nights, three performers per night, 30 minutes per set. (It used to be 45 minutes; this is a good change.) Artists can fill that half-hour however they choose. There was more range than usual this week, even for an event that prides itself on variety.

[Read more about how this year’s artists planned their sets.]

That they fit in so naturally with the other performances speaks to the broad ears of the festival and its audience, even if those other sets were more overtly experimental. But even here there were divergent approaches.

Charmaine Lee (on Tuesday) and Erin Gee (on Thursday) shared a wordless vocabulary of pops, whistles, croaks, exhalations, squiggles of sound. But while Ms. Lee’s music — part of it conjured alongside Conrad Tao, on piano and electronics — had a loud, violent, expressionistic charge, Ms. Gee’s was whispery and precise, both solo and with musicians of the Argento New Music Project, in examples of her ongoing “Mouthpieces” series.

On Wednesday, Kate Soper’s voice was sent ricocheting through the theater by Sam Pluta’s explosive electronic manipulations; the text, as usual with Ms. Soper, was a dense work of ancient philosophy, given a lively yet earnest spin. She then moved to the piano for “The Fragments of Parmenides,” moving back and forth between speaking and singing as she played with the conventions of singer-songwriter cabaret.

In the only fully solo set, Anaïs Maviel accompanied herself on the kamale ngoni harp on Wednesday, plucking a steadily flowing background that her mellow voice sinuously wove around. At the end of an elegant improvised set on Thursday with the pianist Vijay Iyer and the bassist Shahzad Ismaily, who both doubled on electronics, Arooj Aftab sang a soft but reverb-soaked chant over a spacey, pulsing low drone. (“Neo-Sufi,” she aptly describes herself.)

Accompanied on Wednesday by a band combining string lushness and rock amplitude, Ted Hearne’s voice surged from baritonal belt to airy falsetto in a series of settings of Dorothea Lasky poems that emphasizes their brooding emotiveness more than their wry humor. For a drier dissection of a poetic text, Tuesday brought Jane Sheldon and her adaptation of Alice Oswald’s “Dunt: a poem for a dried up river.” A riveting study in breath, it was heavy on rhythmic exhalations as an ensemble quietly, droningly evoked a summer night: the low blow of a conch shell, soft bell-like ringing, gentle sliding sounds.

Ms. Sheldon crawled over a strip of wet clay as she sang, then remained onstage after the house lights had gone up for intermission. With a bashful smile, she said that Roulette wouldn’t want her to walk off with her feet so dirty.

“But it’s over,” she said, to the audience’s laughter. In its unpretentiousness, the moment captured Resonant Bodies.

Tuesday through Thursday at Roulette, Brooklyn.

Zachary Woolfe has been the classical music editor since 2015. He was previously the opera critic of the New York Observer. @zwoolfe

There’s Only One Right Way to Squeeze a Lemon

Ashley Graham & All the Celebrities Who Had Babies in 2020

Jessica Simpson Recalls Moment She Knew She Had to Quit Drinking

Wendy Williams Denies ‘Fartgate’ & Explains Mystery Noise Fans Thought Was Her Farting On Live TV
We and our partners use cookies on this site to improve our service, perform analytics, personalize advertising, measure advertising performance, and remember website preferences.Ok