As a young dancer, Katy Pyle related to Giselle, the ballet heroine who is betrayed by a nobleman. That — and a weak heart — causes the character to go mad and die. For Pyle, the draw was Giselle’s unwavering dedication to dance, specifically to ballet.

But getting the chance to dance such an ethereal role was not likely to happen. Pyle, who uses the pronouns they and them, was strong and was told by teachers, “You would have had a great career if you had been born a boy.”

With their inclusive company, Ballez, Pyle wants to widen access to the art form: to give ballet back to dancers who may have also lost their connection to it but not their desire to dance it on their own terms. In recent years, Pyle has transformed traditional ballets like “Firebird” and “Sleeping Beauty”; now they debut a virtual reimagining inspired by “Giselle.”

There’s a twist. In “Giselle of Loneliness,” seven dancers audition for the lead part, performing their own mad scene for viewers instructed to rank them from one to five in categories ranging from jumps and turns to more interpretive prompts: “virginal,” “hysterical” and “suffering.” For the opening-night stream, which was performed live for an audience, there was a score sheet to fill out along the way. 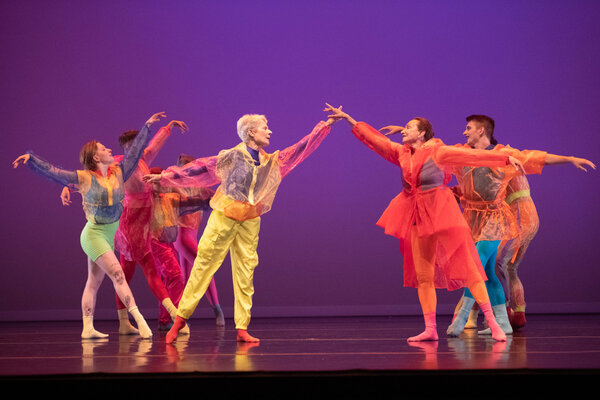 In Pyle’s production, presented by the Joyce Theater through June 23, there is no actual Albrecht, the nobleman who masquerades as a peasant to win Giselle’s love. Here, Albrecht represents ballet: that thing you love until it crushes your spirit.

As the dancers sail and stumble and wobble through their solos — on more than one occasion, gasping for air — their scrappy renderings become less of an audition than excavations of pain and buried emotions. Performances reveal moments of humor mixed with fury. Wigs help on both accounts, but there are individual touches, too: The glare Alexandra Waterbury interjects between steps or Charles Gowin’s irritation as he yanks off his ballet slippers and whips them into the wings.

Maxfield Haynes (they/them), a stunning dancer in a beehive wig that eventually comes off — along with their costume — places the skirt of their dress over their head like a bride’s veil, a foreshadowing of the ballet’s second act. Each solo ends in death. Between auditions, the host, Christine Darrell (Deborah Lohse), commands us to vote. Within her is a dash of Myrtha, the imperious ruler of the Wilis, the spirits of young women betrayed by their lovers.

She sits with the judges, played by Meg Harper and Janet Panetta — New York dance royalty — gesticulating as if a real discussion is taking place. At first, Pyle’s concept is intriguing, but the competition gimmick grows tedious. By the time the seventh dancer rolls around, you’re kind of like, enough.

More moving than these audition performances is the writing that accompanies the dancers’ bios. “In a way, Giselle is this unattainable thing,” MJ Markovitz says in the program. “But at the same time I think my performing my version is the rejection of all of these things, and all of these preconceptions.” Haynes writes about feeling betrayed by a world that wouldn’t let them dance on pointe, that only saw them as a man: “Ballet to me is like a prison with flowers.”

By the end, “Giselle of Loneliness” is a lush garden of bodies: more of an awakening than a dance of death, as in the original. The dancers stand nervously in front of the curtain in bathrobes waiting for Lohse to announce the winner of the competition; then they turn on her. Stretching an arm with a rigid, flexed hand, they become Pyle's version of Wilis as they slowly spin amid increasing darkness. A curtain parts to a stage full of swirling dry ice.

At first it’s an ominous sight, these rotating dervishes in bathrobes, but soon their chests pitch forward and their robes open. Joined by Lohse and, eventually, the judges, the aspiring Giselles re-emerge dressed in Pyle’s shiny, transparent costumes in shades of pink and canary as they glide in and out of formal patterns with gratefulness and glee.

It’s sweet. What has always stood out about Pyle’s dances isn’t the battle between strength and delicacy, or fighting against ballerina stereotypes, but the way the dancers temper their rawness with sincerity. There is joy and abandon. Vulnerability? Always.

In the end, no votes were tallied. It was never about winners and losers: What matters is how these dancers, guided by Giselle, find their way back to ballet. It’s personal. And there’s room for all.