Everyone wants to hear Audra McDonald sing. So it’s a clever touch that Arin Arbus’s production of “Frankie and Johnny in the Clair de Lune” — which despite the Debussy in its title is not a musical — gives Ms. McDonald a huge aria right off the bat.

More of a duet, really, though her co-star, Michael Shannon, isn’t so much singing as grunting.

That’s because “Frankie and Johnny,” which opened on Thursday at the Broadhurst Theater, begins with the sounds of Frankie (Ms. McDonald) and Johnny (Mr. Shannon) making love: “noisy, ecstatic and familiar,” as the script, by Terrence McNally, puts it.

Familiar, that is, if you’re used to Puccini orgasms.

It could have been a stumbling block for this touching revival of the 1987 play that Ms. McDonald (a six-time Tony Award winner) and Mr. Shannon (twice nominated for an Oscar) are hardly the dowdy, downtrodden types Mr. McNally calls for. Unlike Kathy Bates and F. Murray Abraham, who starred in the first production (Kenneth Welsh soon took over as Johnny), they arrive onstage with fabulous, shiny auras.

So it’s a typically smart bit of cheek that Ms. Arbus gets those auras out of the way as quickly as possible by offering us a spoof of glamour and then dropping it completely.

Nor is it the last bit of cheek we get: Stage nudity is a great equalizer. No matter how fit they may be, actors shown bumping in bed, or falling out of it afterward, begin to look a lot like anyone.

That’s key to the success of “Frankie and Johnny,” because Frankie, a waitress, and Johnny, a short-order cook, are offered to us as archetypes of anonymity. Frankie spends much of their first night together, from post-coitus to pre-dawn, insisting on her ordinariness, especially in contrast to what she sees as Johnny’s florid weirdness.

“I’m a B.L.T. down sort of person,” she says, though I’m not sure anyone in real life ever has. “And I think you’re looking for someone a little more pheasant under glass.”

In time, Mr. McNally will complicate both ideas, unpacking the specific someone in anyone. You learn why Frankie, a high school dropout who came to New York to be an actress, failed; her upbringing, not to mention an abusive former boyfriend, almost required it.

Ms. McDonald’s feral, sometimes scarily raw performance shows how Frankie flips that failure into a personality: If she’s going to lose anyway, it might as well be on her own terms. Her Frankie is wheedlingly defensive, coarsely self-deprecating, sexually free only so long as she can send the gentleman home after offering him a slice of meat loaf and a glass of milk. 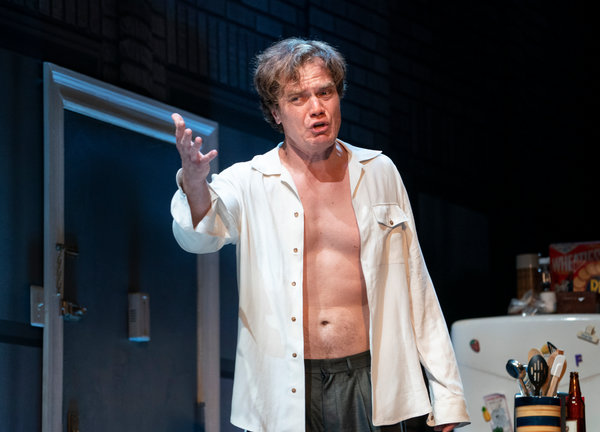 But Johnny, a new kitchen hire at the greasy spoon where she works, frazzles all that; for one thing, he won’t leave. (He does accept the meat loaf, which he says is “direct from Mount Olympus.”) He, too, is a self-admitted failure, but a recovering one, and like many a self-educated savant, speaks grandly, citing Shakespeare, almost as a talisman of self-respect. He needs big language to corral his big feelings.

The clash between Johnny’s expressiveness and Frankie’s armor keeps the play moving forward as it toggles between comedy and pathos. At its best, it tucks one inside the other. Frankie hears Johnny’s fulsome praise of her breasts, her hair, her everything as crazy or mocking or at least reflexively insincere; he hears her rejection of his praise as deliberately deflating.

So when he exults by saying “I want to bask in your body,” she promptly snaps: “Sure you do.”

That two equally last-ditch middle-aged characters with such perfectly interlocking neuroses should find themselves in Frankie’s cheerless Hell’s Kitchen studio — the haunted-looking set is by Riccardo Hernández — is a premise you could pick at. Too much symmetry seems suspicious.

And some of Mr. McNally’s habitual flourishes show through the play’s surface like the underpainting of a different picture: the showbiz references, the orotund dialogue, the frequent intrusion of classical music. Aside from Debussy we are treated to excerpts from Bach, Scriabin, Shostakovich and Wagner — along with a plummy late-night radio disc jockey (Mr. Abraham, in a delightful audio Easter egg) to underline their import.

Still, time has been good to “Frankie and Johnny,” which already had a fine Broadway revival in 2002. (Edie Falco and Stanley Tucci starred.) Its sentimentality hasn’t curdled the way it has in some of Mr. McNally’s many other plays. For one thing, we are far enough away from its specific 1980s setting to see it without the coloring of that decade’s concerns. AIDS is mentioned but has little sting, letting the comedy rise.

Ms. Arbus, making a strong Broadway debut after a decade of critical success Off Broadway, seems to have realized that the comedy is crucial, not only because her stars trail tragic associations from most of their previous roles but also because the play can teeter on the edge of bathos. Her strategy of dryness and detail and specificity — leaving the poetry to Natasha Katz’s lighting — pays off.

As a result, the McNally mannerisms are basically harmless here. (So are the strange, supposedly Pennsylvania accents.) Even the obvious overstretching of the plot to fill two acts doesn’t matter as the play’s bigger mysteries click into place. What begins as a basic inquiry into the nature of love — is it blind or, as Johnny says, “the exact opposite”? — slowly transforms into something deeper and eerier as the couple decides how, or whether, to proceed.

At such moments, Mr. McNally, who has won four competitive Tonys and will receive a special award for lifetime achievement at this year’s ceremony, seems to undermine the premise of romantic comedy, which stipulates that there is someone for everyone. And not just someone, but some one.

Life has stripped Frankie and Johnny of that illusion. They must face the fact that they may not be soul mates — and that someone else, or no one else, may be.

And yet here they are. That she finds his wrists sexy and that he likes the very parts of her body she most disdains are happy aspects of the same dreadful randomness that makes even the deepest love feel provisional.

In Mr. Shannon’s extraordinarily lucid performance, you can see such thoughts float across Johnny’s face. And when, at the end, he carries off a full minute of solo silence — an eternity in stage time — you get the rare sensation of human thought and animal reality combining to form living character. He might do anything, you think: bolt, go crazy, die on the spot.

But as “Clair de Lune” plays on the radio as the sun comes up, he merely cries; the play and, yes, that music, defy you not to do the same.

Frankie and Johnny in the Clair de Lune

Frankie and Johnny in the Clair de Lune

This information was last updated on April 4, 2019

Jesse Green is the co-chief theater critic. Before joining The Times in 2017, he was the theater critic for New York magazine and a contributing editor. He is the author of a novel, “O Beautiful,” and a memoir, “The Velveteen Father.” @JesseKGreen • Facebook