Love isn’t a battlefield. It’s a melee, a riot — a hair-pulling, face-scratching, ear-biting fray. Here’s Venus, its patron goddess, to answer some frequently asked questions: “If you still have friends, then you’re not in love. If you can brush your hair and wash your face and step out into the sunlight, then it’s not love.”

Venus incarnates in “Pathetic,” Julia Jarcho’s squirmy, sinister meditation on female desire as weapon and a liability. An update of Racine’s “Phèdre,” a classical French drama about a woman’s uncontrollable lust for her stepson, the play replaces Racine’s stately alexandrines with lines about sex and barf and decay. Actually, a lot of those are in hexameter, too; Ms. Jarcho is no slouch.

Produced by Minor Theater at the Abrons Arts Center, the play is set kind of in the ’90s (check the fashion) and kind of in the now (check the cellphones). There’s a whiff of ancient Greece, a callback to a time when gods seemed nearer and one might take hold of a human, just for the lulz. One deadpan shout-out: “Greek,” a girl says, handing off her yogurt carton to her friends.

Somewhere in the Southwest, a high school student, Consuelo (Kim Gainer), lives with her lonely mother, Rosario (Linda Mancini, magnificent). She and her friends, the fierce Clara (Jennifer Seastone, who also designed the clumsy video segments) and weird Millie (Kristine Haruna Lee), are votaries of Venus, though only Clara is sexually active. With a teacher — gross. (That teacher is played by Ben Williams, who also sits in the audience, overseeing the shrieking sound design.) Gathered in one bedroom or another, the girls perform rituals and make sacrifices, intoning: “All Honor. All Gorgeous.” 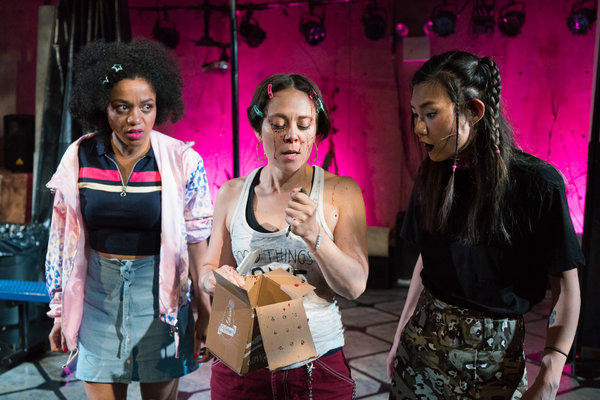 Eventually, Venus demands Rosario’s service, too. And Rosario, helpless, adorns herself in lipstick and push-up bras, trying to seduce her Zumba instructor (Jordan Baum, who doubles as a goth teen) with a body she knows he doesn’t want. She warns her daughter of a future where “no one will be able to touch you without shuddering” and “you will look at a man you want and that desire, your desire, will instantly turn murderous because you know so well no other satisfaction can be yours.”

If you’re into etymology, you’ll know that “pathetic” has several meanings. There’s the contemporary gist: sad, pitiful, lame. But in the classical French that Racine would have used, it means arousing emotion. And in Greek — the language, not the yogurt — it denotes a person who is liable to suffer. Get it? To feel is to make ourselves vulnerable, susceptible to pain, very uncool.

“Pathetic” joins other recent plays — “The Wolves,” “Dance Nation,” “Athena” — in its insistence on female subjectivity and its emphasis on the complexities and occasional messiness of women’s lives and bodies. If not entirely legible (as in her other work, Ms. Jarcho prizes theme, emotion and language over lucidity), it’s unsettling and exciting and flick-knife sharp on the aggression underlying friendship, sex and love.

“Phèdre” ends in suicide and murder. “Pathetic” doesn’t. But to live in a body that feels and wants and doesn’t get what it wants, this play insists, is a kind of tragedy, too.

This information was last updated on June 14, 2019