If a good story is told well enough, you want to hear it again. And again. And then at least once more, because you’re sure there’s so much left to discover.

That’s certainly the case with Jez Butterworth’s “The Ferryman,” which has been nominated for nine Tony Awards, including Best Play. There are 21 fully defined characters in this pulsing, three-hour drama, and having seen the show four times (first in London), I feel I’ve come to know them all intimately.

But on my most recent visit to the Bernard B. Jacobs Theater, where “The Ferryman” runs through July 7, it was the three youngest Carney girls with whom I truly identified. They’re the ones who sit breathlessly at the feet of their old great Aunt Maggie Faraway, a mysteriously silent woman, whenever she shows signs of wanting to talk.

Played by Fionnula Flanagan (a radiant holdover from the original Broadway cast and a Tony nominee), Aunt Maggie often tells the same stories. But whether accounts of grisly battles of faeries from a misty, mythic past, or of a lost love of a mere seven decades ago, they are tales that only tighten their grip with repetition. Just look at the widening eyes, scared and ecstatic, of the little girls listening.

That’s the effect of “The Ferryman” as a whole, and I felt it afresh watching a new, largely American ensemble led by the excellent Brian d’Arcy James as a farmer and father of seven, whose family is disastrously overtaken by its past. As dazzlingly directed by Sam Mendes, this sprawling portrait of a rural Irish family during the Troubles makes singularly dexterous use of a basic tool often considered old hat in the theater these days: a juicy, suspenseful and impeccably orchestrated plot.

If that makes “The Ferryman” sound like the stage equivalent of a best-selling page turner, well, it is. But not only that. Because without ever seeming self-conscious, Mr. Butterworth tells a spellbinding story that is also all about storytelling.

And I mean all forms of stories — national folklore, family legends, political news, even recollections of things that occurred only minutes earlier, which had seemed to turn into anecdote even as they were happening. “The Ferryman” is a celebration of the human — and classically Irish — urge to give life shape through narrative, and a lamentation for those who find themselves trapped in myths that assume the inevitability of fate.

The machinery of words and stagecraft that keep these stories in full spin is so meticulously assembled that I sometimes wonder if “The Ferryman” might succeed with even a mediocre cast. Fortunately, the team of performers now in residence at the Jacobs is considerably better than that.

Feelings run closer to the surface with this new cast. Perhaps that comes with its being mostly American. Hidden loves and suppressed animosities are now worn more visibly and emotively, and certain revelations now feel perhaps less startling.

What’s most interesting is the way the power has shifted among the characters without upsetting the play’s taut balance. This is particularly true of the two women who vie for dominance in the household of Quinn Carney (a magnetic Mr. James, in a role that finally makes full use of his heroic potential).

Mary, Quinn’s bedridden wife, has acquired a bedrock obduracy, as played by Emily Bergl. As her sister-in-law Caitlin, the wife of Quinn’s long-missing brother, Holley Fain is more highly strung and more visibly fragile than Laura Donnelly was in the part.

Similarly, as Quinn’s staunchly nationalist Aunt Pat, Ann McDonough is less fiercely hidebound than Dearbhla Molloy was; there’s more obvious pathos to her. In the role of her brother Patrick, on the other hand, Fred Applegate locates a moral severity within his character’s Virgil-quoting magniloquence. 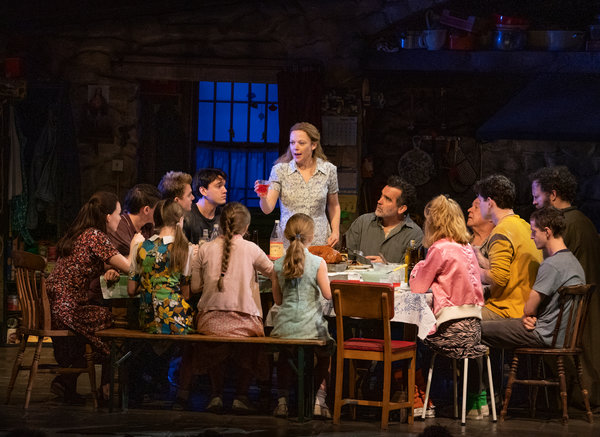 Mr. James, Mr. Applegate and — as the slow-thinking English handyman Tom Kettle — Shuler Hensley step into their roles as if they were old bathrobes. If others new to the cast haven’t yet achieved that level of comfort, they never slow the show’s momentum or disrupt its hypnotic hold.

Once again I gasped at the tableau involving a suspended animal corpse, and again when a shaving razor from an early scene is used for other purposes. And I marveled anew at how the divided nature of a nation, and a family, is summoned so exuberantly in a bravura sequence of dances around a dinner table.

It was also rewarding to see Sean Frank Coffey for a second time — and in one of his final performances — in the role of Baby Bobby Carney. At the age of seven months, Mr. Coffey played that part with uncanny but utterly natural poise when the show opened in October.

I am happy to report that in the intervening period, he had only grown in the role, without growing out of it.

Ben Brantley has been the co-chief theater critic since 1996, filing reviews regularly from London as well as New York. Before joining The Times in 1993, he was a staff writer for the New Yorker and Vanity Fair.