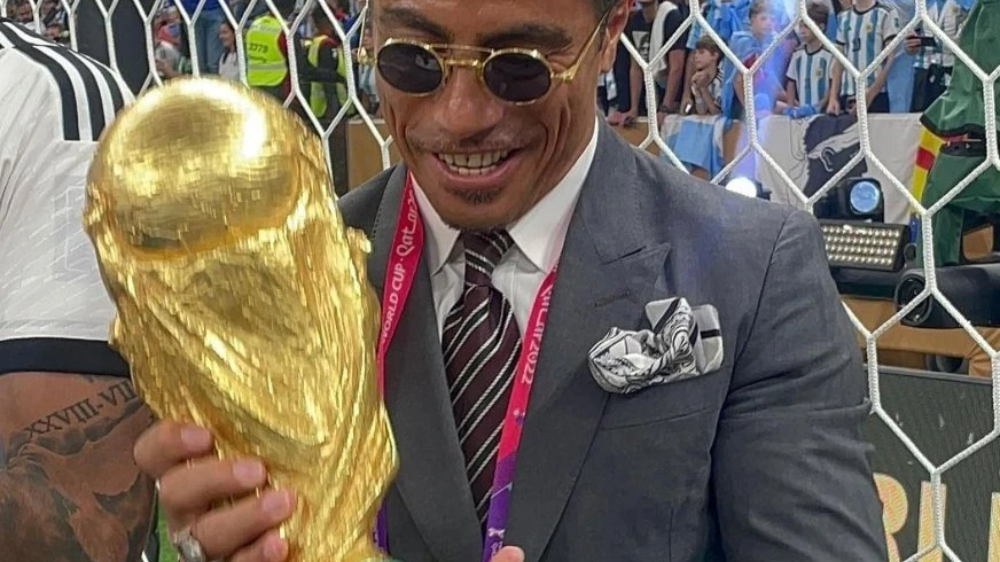 If you live for cringe, you’ll love Salt Bae’s antics at the World Cup final.

While the moment was, understandably, all about Argentina following their triumph over France, Salt Bae couldn’t help but get in on the action.

The Turkish chef, 39, was living his best life by mingling amongst the players at the Lusail Stadium, La Albiceleste, even making his way onto the pitch and, wait for it, biting a player’s medal.

Salt Bae, whose real name is Nusret Gokce, also lifted the coveted trophy, which is typically only allowed to be touched by a handful of people – and we don’t think Salt Bae’s name is on that list.

Football fans were outraged following the scenes, given that FIFA says the World Cup trophy ‘can only be touched and held by a very select group of people, which includes former winners of the FIFA World Cup and heads of state.’

Salt Bae smiled as he posed for several photos with the golden trophy, with Twitter users later demanding to know who let him onto the pitch.

However, the most talked about moment came when Salt Bae didn’t exactly get the warm reception he hoped for from Lionel Messi.

Footage captured the social media star desperately trying to get close to Messi, placing his hand on his shoulder.

Despite Messi repeatedly trying to get away, he reluctantly shook Salt Bae’s hand, before the chef tried to pull him back again for a chat.

The internet was living for the awkward interaction, though, not to mention’s the footie star’s concerned expression.

‘Messi not having any of Salt Bae makes me love him even more,’ one wrote.

‘Salt Bae is all about ostentatious displays of wealth and excess, and that’s just not Messi’s style,’ said one.

‘Messi getting harassed by Salt Bae is not something I expected to see at this tournament,’ added another, summing the whole thing up perfectly.