Sex and spectacle are on the menu in “Seven Deadly Sins,” a sumptuously staged, deliciously outfitted exploration of vice performed in the meatpacking district, once home to slaughterhouses and sex clubs, though now more about trendy dining and swanky shopping.

Yet this feast for the eyes — bringing to life seven short plays performed in storefronts to audiences who mostly watch through glass but listen on headphones — turns out to be more about appearances than anything else.

But we begin in Purgatory (a blue neon sign makes that clear) greeted by Shuga Cain from Season 11 of “RuPaul’s Drag Race,” who arrives like a beautiful, lip-syncing hurricane of gloss and glitter in the first of Dede Ayite’s many stunning costumes.

“What better place to look at human nature than the stage,” she purrs, setting in motion how the show will work: Each of three groups will maneuver through the circuit of plays in a different order over a three-block radius, sitting to watch each roughly 10-minute performance before rising and walking to the next.

My first sin of the night was gluttony, for which Anyanwu presents an alternative Garden of Eden story with “Tell Me Everything You Know”: Here it’s just Eve, here called “Naked” (a timid Morgan McGhee) and mostly covered in knee-length dreadlocks, and the snake, called “Clothed” (a sultry Shavanna Calder), in a sleek black bodysuit and a ponytail of hair styled into giant interconnected chain links. The snake’s temptation becomes queer in this context, and Anyanwu has linguistic fun with her Eve’s awakening, which comes in a verbal cascade.

Sex, queerness and body positivity are central themes of most of the plays. In LaHoste’s envy play, “Naples,” set not in a storefront but in a shipping container on a cobblestone street, a manipulative 18th century French noblewoman (Caitlin O’Connell, stately yet cunning) has a less than friendly exchange with her husband’s not-so-secret boy toy (Andrew Keenan-Bolger).

Bradshaw’s “Hard,” about a schlubby, unmotivated gamer (Brandon J. Ellis) whose wife (Shamika Cotton) tries to convince him to have sex, struggles to hit its comedic beats. The slovenly man-child paired with the attractive partner is old hat, and the sitcom dynamic between sad-sack husband and nagging wife feels unintentionally regressive. 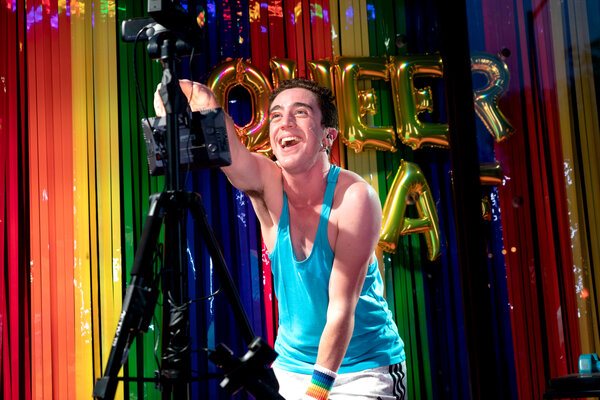 MJ Kaufman’s “Wild Pride” is the most politically conscious play of the batch, a pointed critique of the commercialization of queer advocacy. In a storefront set full of TVs, rainbow streamers and balloons that read “Queer AF,” a trans social media star called the “Guru” (Cody Sloan) believes he’s providing affirmation for his fan base (Bianca “B” Norwood, voicing comments from followers and other influencers) but finds the tide turn against him and is confronted with the shallowness of his brand.

In “Lust,” a pole dancer (Donna Carnow) does her usual routine as we hear, via voice-over, her internal monologue, performed by Cynthia Nixon in her best matter-of-fact Miranda Hobbes. The mix of mundane thoughts (“Refill prescription for eczema cream”), casually withering judgment (“Oh, sweetheart, do you think I don’t know a toupee when I see one?”) and hefty declarations (“There is no God.”) showcase Wohl’s talent for capturing the quirky ways people think and move through their everyday lives.

Carnow’s dancing, however, is the production’s true showstopper. She does splits and body rolls, windmills herself around the pole and performs aerial contortions that look utterly unreal — all with perfect nonchalance. And did I mention the platform stripper heels? When she’s upset, her heels violently stomp down to the floor, and when she’s caught in an anxious spiral her body likewise spins around the pole.

It’s a problem throughout “Seven Deadly Sins,” a presentation of Tectonic Theater Project and Madison Wells Live. That’s not to say their money isn’t well spent, both in Ayite’s costumes and David Rockwell’s remarkable scenic and site design.

He gives Eden dimension with bright flowers and layered panels painted in lush greens in Anyanwu’s “Tell Me Everything You Know.” And the cascade of gilded roses and baroque accents in “Naples,” as well as the sex dungeon props in “Longhorn,” show extraordinary attention to detail.

Yet perhaps my favorite of the sets was Christopher and Justin Swader’s clever scenic design for “Watch” — the contemporary, lifeless room of what appears to be a funeral home, bisected by a grave with a coffin in the center, which we see as if from overhead.

“Seven Deadly Sins” is eye candy, no doubt, and a fun interactive experience for those who crave a lively outdoor performance with a few raunchy surprises. But given the emphasis on sexuality, and nods to the meatpacking district’s transgressive history, I expected a more exacting sociopolitical statement. There should be more than meets the eye.